Portsmouth, Virginia, just across the river from Norfolk, provides two different free docks for transients. There is really nothing better to a cruiser than a free dock in the heart of a metropolitan area, and we took advantage of it. But shortly after we tied up, we started talking to another cruising couple whose comments almost made us untie the lines and anchor out. They did not offer warnings about crime or wake, but instead noted that they had relocated because of the large number of “dock roaches” that were about. They worried that these dock roaches would climb onto their boat and infest it and cautioned us lest the bugs inundate Bear.

Bear tied up alongside in one of the two snug harbors in Portsmouth, Virginia

As we walked away, Margaret and I worriedly conferred, both admitting that we had seen some things scurrying about the dock. Neither of us wanted to have roaches aboard Bear, especially because they would surely make it through the winter on the hard in Georgia. We debated whether we should move the boat to the other basin or head just north and anchor off Hospital Point, which would still put us in close dinghy range. But before we made any rash decisions, we decided to consult Google.

It did not take us long to figure out that the things we saw running about the docks went by the scientific name of ligia exotica and are commonly referred to as wharf or dock roaches. Despite their name, they do not share much in common with the cockroach. Indeed, the wharf roach was not likely to run up our dock lines, clamber aboard, and plague the rest of our days on Bear. These little guys like to hang out in the splash zone on rocks and, especially, docks where they can hide and scavenge amongst the cracks and crevices. While our bilge has lots of cracks and crevices, there is no splash zone, and the flat sides of the outside of the hull would not be too inviting either. 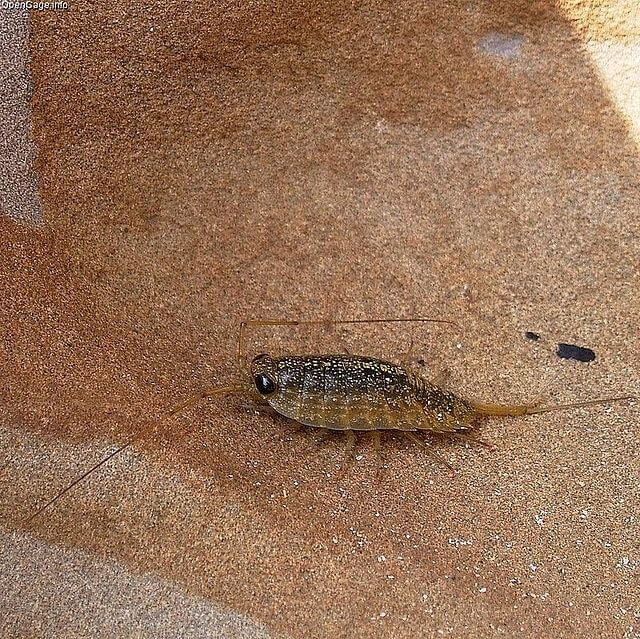 Once we established that ligia exotica was not going to invade our boat, we found these creatures to be pretty interesting. They would hang out on the dock but quickly run away as soon as we came walking along. Since birds find them tasty, that behavior seems to make a lot of sense. But the more interesting thing about the wharf roach is its history. Scientists are not sure where these animals originated, but they now inhabit temperate coastal regions throughout the world. It is thought that they were brought around the world unwittingly in the ballast of ocean going ships and in the interstices of wood hulls just above the waterline. Despite their status as an invasive, scientists do not seem to think they have had a large impact on the ecosystems they inhabit, though it seems likely ligia exotica has displaced or reduced the numbers of the species it competes with (from my completely untrained scientific perspective but very real experience and training as an environmental historian, I imagine that scientists have just not looked all that closely at the impacts of this small, seemingly insignificant creature as I cannot think of an invasive that has not had a significant impact on its ecosystem).

Me aside a statue of a seaman in Norfolk…surely he knows something about wharf roaches.

As we headed south, I saw ligia exotica on nearly every dock I came across, now that I knew what to look for. With their numbers, if they were really a problem, every boat that has ever tied alongside would be battling these creatures. While we will not be making a habit of bringing the wharf roaches aboard, we decided there is no reason to fear an infestation. Now, I do not think the same thing can be said about the rat that I saw on the same Portsmouth dock or the cockroaches that the guy tied up across from us at the Oriental town dock said he was battling, but those are stories for another day.

One Response to Wharf Roaches!