Oh, That Is Just a Tank in the Middle of the Intracoastal Waterway

Heading south from Norfolk, the Intracoastal Waterway slowly introduces you to more challenging navigational elements, sort of liking advancing to a new level in a video game. You start off the first day with a dozen or so bridges and a lock. The next day, you could get some nasty weather along the Albemarle Sound, and you also need to pay careful attention for stumps and other debris in the Alligator River. Before long, you are dealing with all of the above together with current, poorly marked channels, shoaling, nine foot tides, and a host of other potential dangers.

After several days heading south, we were well into level three of the ICW video game, but had yet to encounter serious shoaling, current, and tide. Cruising through Camp LeJeune – named for Margaret – seemed like a little reward with lots of interesting things to look at: Osprey (the metal kind) practicing touch and goes, Marine patrol craft passing by with soldiers in full battle rattle and face paint, beautiful natural scenery, etc. The navigation seemed easy; all we had to do was follow the frequently placed reds and greens and negotiate the Onslow Beach Swing Bridge. 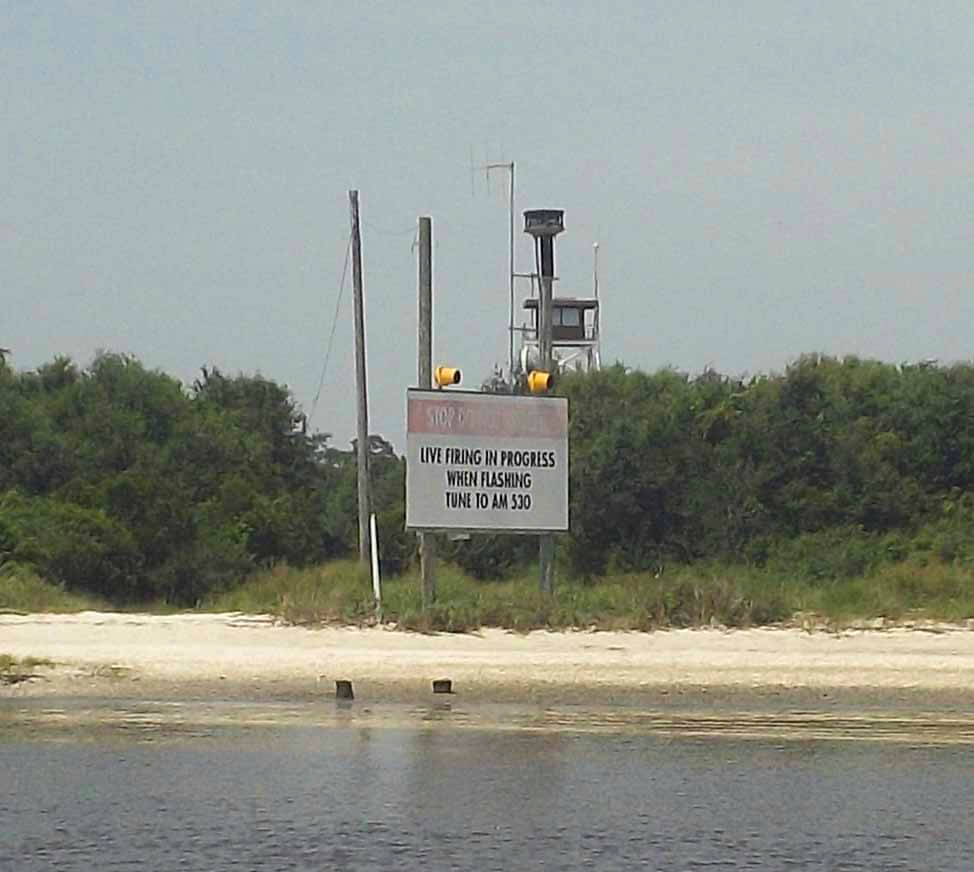 At the entrance to Camp LeJeune.

Of course, right when you start thinking everything is in hand is exactly when King Neptune – or, in this case, the Marines – decide to throw something at you to keep you on your toes. Near mile 239, when our thoughts were already on the bridge that was just another ten minutes down the waterway, we came across a curious set of marks. I was at the helm while my cousin, Tim, was hanging out on the bow. As I looked ahead through the binoculars, I could see a green day mark appropriately off to the left and a red nun to the right slightly before the green. But there also appeared to be another green can just past and to the right of the red. Conferring with Tim, he confirmed the perplexing situation I was seeing. 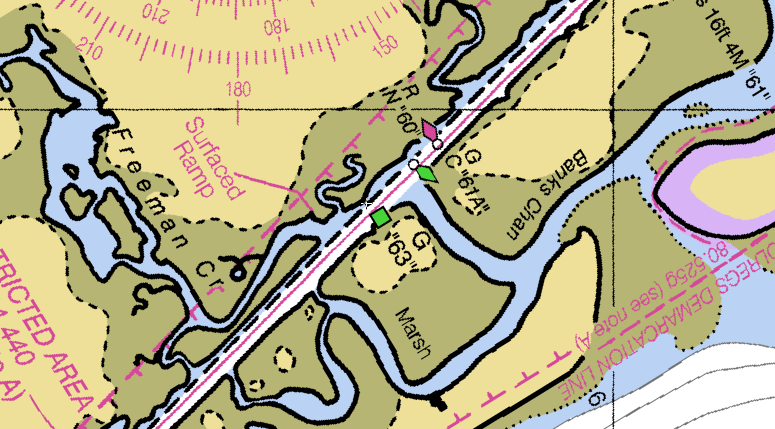 If you look carefully, you can see that newer charts actually confirm that the markers were on station.

Giving myself a few more moments to figure this out, I slowed to bare steerage. My first thought was that the green can was off station, having been pulled across the channel by another boat, barge, or storm. But that did not seem right either because why would they have a can right near a day mark. Day marks – channel markers on more permanent poles – are usually placed in locations where the Corps and USCG assume that there will be no reason to move them anytime soon whereas cans and nuns – floating marks anchored to the bottom – often mark shifting sections of the channel where changes are likely. We had not seen very many cans and nuns recently, and their presence here seemed to indicate that there was some sort of issue with the channel.

While the marks did not make too much sense, I preferred to trust them than simply assume that there was nothing wrong. But I also wanted to confirm things. Fortunately, we had excellent 4G cell reception and I had my phone in my pocket. I quickly called up ActiveCaptain on the NutiCharts Lite app (which has been discontinued, but still works fine for me). It only took a second to see that there was indeed an obstruction in the channel and that it was necessary to obey the markers.

With almost no way on, we headed to the red “60” nun on the right side of the channel, watching as the depth sounder started registering in the single digits (we draw 5’ 8”). Passing the red marker, we then eased around the green can, “61A,” seeing a low of just over a foot beneath our keel, or seven feet of water. Then we eased back into the channel as the depths rose to the low teens and we gave the Yanmar a little more throttle. 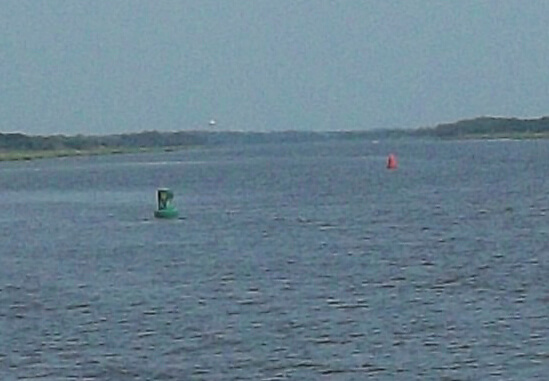 A grainy photo looking back at the markers in question.

As Tim and I laughed about how crazy that quick stretch was, I started reading a little more of the information on ActiveCaptain. There were numerous stories about people coming through there, not obeying the markers, and losing props, bending shafts, and doing other horrific damage to their boats. Apparently TowBoatUS is out there about once a week pulling someone off. There was even a photo of a tug pushing a barge that was stuck on the obstruction (in the tug captain’s defense, there was not enough room between “60” and “61A” for him to get through).

The craziest thing that we discovered on ActiveCaptain, though, is that the obstruction is supposed to be a tank! Now how in the world did a tank end up below fifteen feet of water in the middle of the ICW? And how come the Corps or the Marines have left it sitting there since at least 2013? I can only imagine how much trouble some low level Marine officer got into when he or she somehow lost their tank in the water during some training exercises.

For me, the encounter with the tank was a good learning experience. First, it reinforced my belief that in the absence of conflicting information, following the markers is a solid strategy, especially when I think about whether they are day marks or cans and nuns and why those types of markers might have been placed where they were. Second, it made me realize just how helpful ActiveCaptain can be. From then on, I started to look ahead on ActiveCaptain the night before, noting potential hazards and making notes so that I would know what was coming before we started approaching the confusing markers or heard the depth sounder alarm. Being prepared in this way was a big reason we had no major incidents in the sections of extreme shoaling through South Carolina and Georgia. We had successfully passed to the next level of the ICW video game.

If you missed it, check out our first post about navigating the ICW.