The Third Week in the Yard Prepping for Sabbatical

Over the past week, I have not checked too many things off the list, unlike last week. But there has been continual forward progress. And the end is getting closer with, perhaps, a launch next week.

Last Tuesday was a bit of a lost day. It rained all day, and I was ready with a big list of indoor things that I could get done. But beyond finishing some much needed computer work, making the regular Hurd’s hardware store and West Marine run to prepare for the coming days, and taking some measurements for a Hydrovane, I just totally vegged and rested, listening to A Connecticut Yankee in King Arthur’s Court (free along with thousands of other audiobooks from Librivox) for a good portion of the late afternoon and early evening.

The next day, I was back at it, finally knocking out all the jobs in the lazarette. I also ordered our Hydrovane, which involved a bit of extra effort to save a 2.5% fee for using a credit card to purchase from the Canadian company. With some help from Will at Hyrdrovane, a kind person at our credit union, and the local library here in Deltaville, it all came together. And later that same day, Gloria from Hydrovane called to say the wire had already gone through – even though our bank indicated it might take up to three business days – and they were shipping the unit from England that day to arrive Monday. 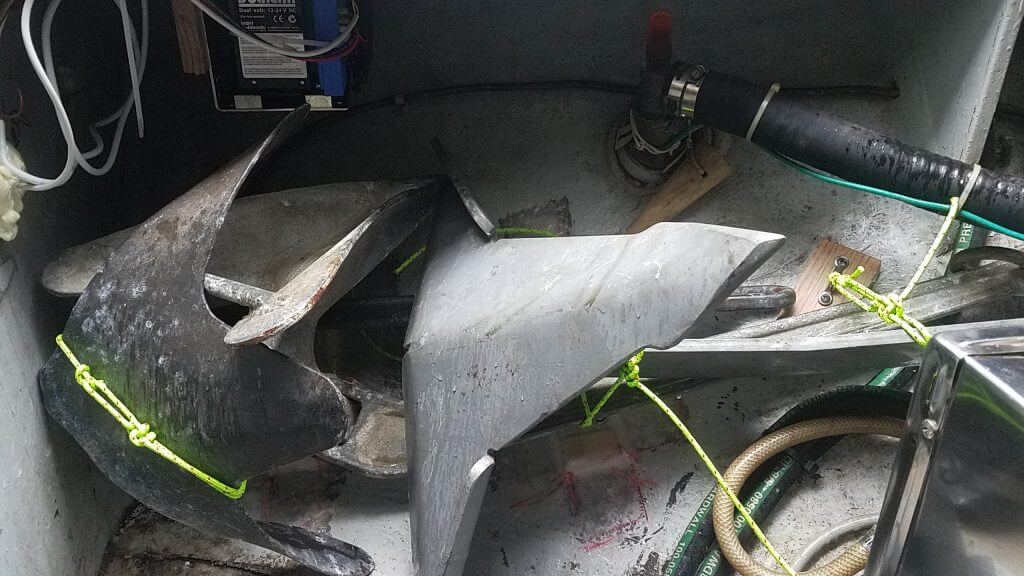 The anchors are well secured and now out of the way tucked under the lazarette shelf. The attachment points for the Sail Rite are now in place as well, along with a few other new features.

The rest of the week, I have been working on the bobstay, whisker stays, and cranse trio. I filled the old whisker stay fittings with thickened epoxy as the new Port Townsend bobstay fittings have a different footprint. This was a longer job than it might appear because the bulwark is three or four inches thick there. In order to get thickened epoxy all through the space, I needed to use a huge syringe. Even with its size, it could only hold enough thickened epoxy for two or three holes. Old hands would still laugh at my patient – or plodding – epoxying speed, but my technique improved markedly as I moved from the port side to the starboard. 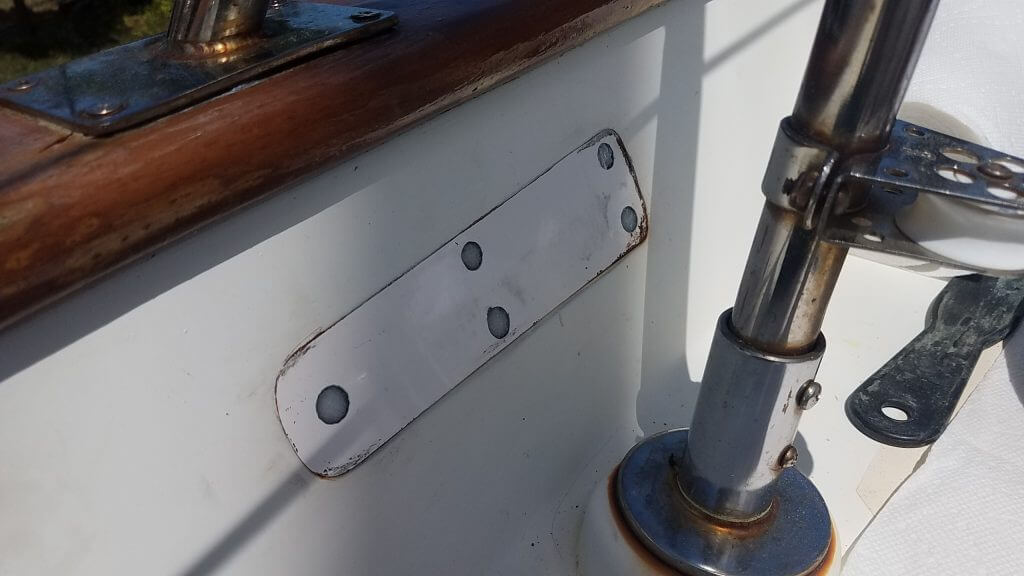 Thickened epoxy in the holes from the old whisker stays.

Getting the cranse off was also a struggle. Before I even began, I realized I had to take off the smaller, port bow roller like I had the starboard one the previous week. That involved grinding off one of the bolts as nothing is ever simple. Then I picked out as much caulk as I could from beneath the cranse, learning a few new techniques from Chris, who works at Walden’s, has a lifetime of experience in yards, and is always willing to dispense a few tricks of the trade. Eventually, though, the cranse only came off with many swings from a hammer (making me a bit sore!).

Looking for things to use the old cranse for now that it is off the bowsprit.

And I had to grind out the embedded nuts that secured the bobstay fitting. We will be using the same holes for the new fitting, but with carriage bolts and a backing plate instead. Again, Chris saved me from a huge amount of work with the simple suggestion of drilling through the nut threads. Still, I had to grind out some fiberglass using the Dremel (because the grinder was too big) while hanging into the anchor locker. For someone who is a bit claustrophobic, there is nothing like getting stuck in the anchor locker by the filters on a 3M full face mask. 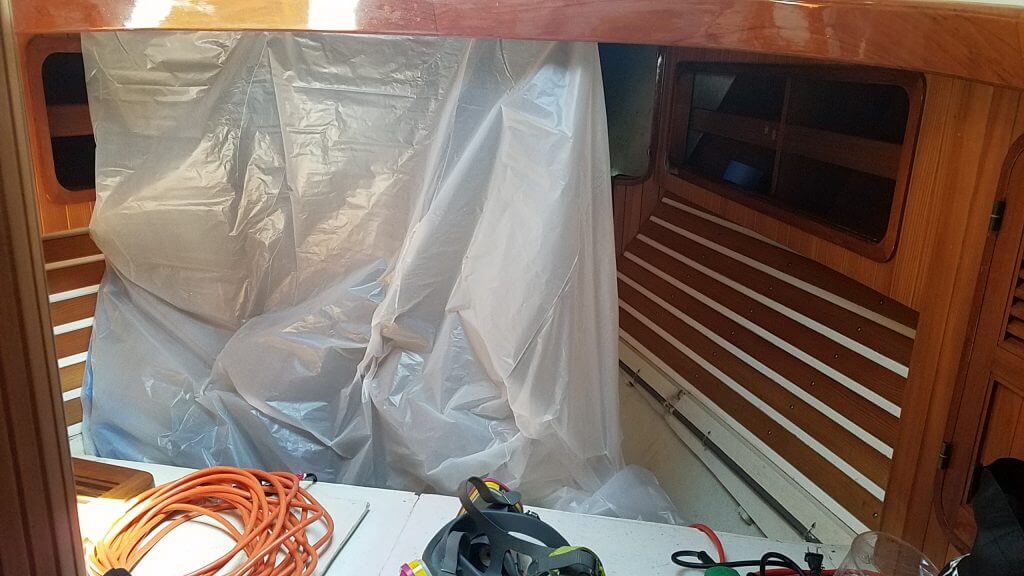 Prepping for the grinding.

Other things that seemed so simple also took up hours and hours. For instance, replacing the last stretch of sanitation hose from our overboard discharge pump to the new seacock was a herculean job, mainly because the Ta Yang yard that built the Tayana had put the hose in and then built the floorboards and cabinetry around it, including glassing in a stretch of the hose. There were, off course, other complications as well.

The S-curve sanitation hose I removed after grinding and sanding around it and finally pounding it through the small space in the floorboards with a block of wood and a mallet. 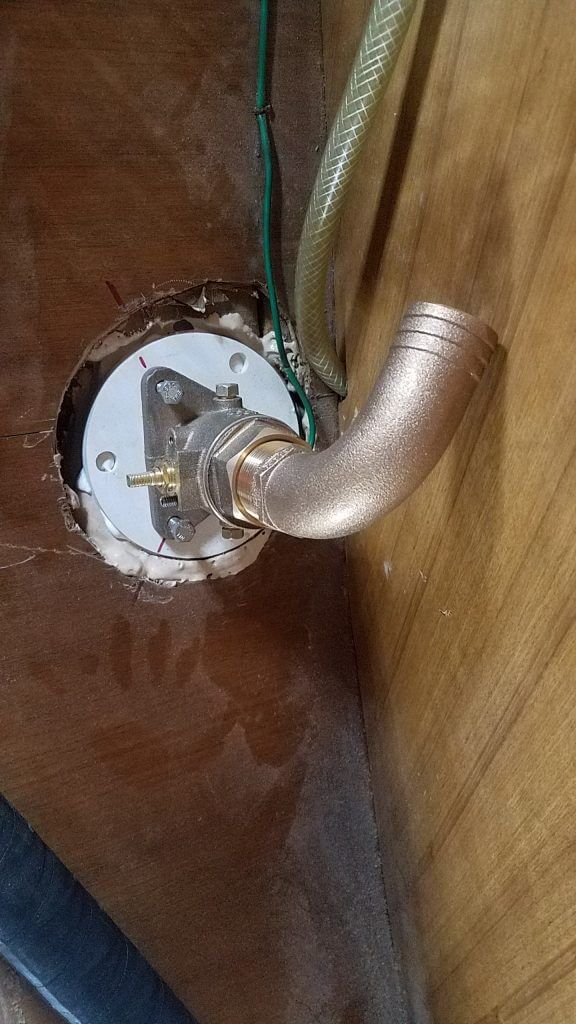 The installation of the 90 degree elbow was fraught as well. 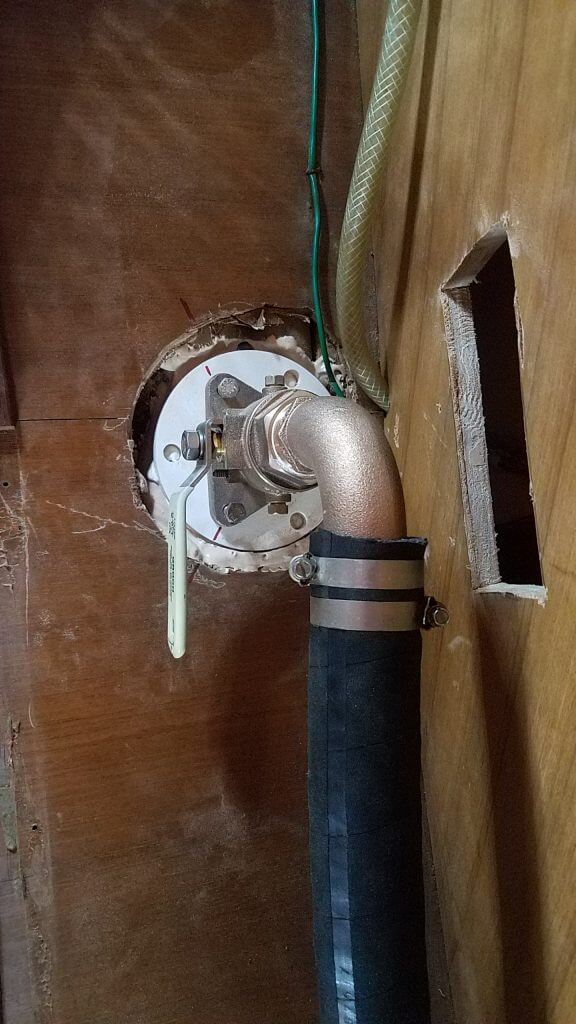 The locker fans also took up some time as well. We had come to the conclusion that the fans were not essential and could be completed once we were underway. However, I already had the v-berth completely taken apart, so I figured it was as good a time as any to tackle that task. Moreover, I really only worked on the fans on the evening when I would not have been doing other boat work anyway. Through the process, I have had the dispiriting, but important realization that it will take at least a month to rewire the boat, something that we have been discussing doing in the future. 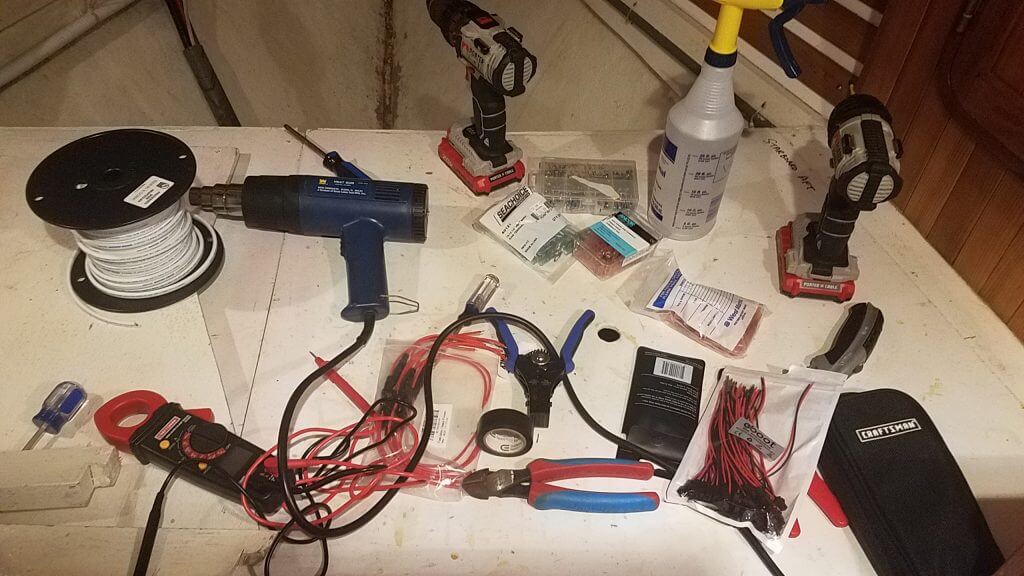 With so many steps in the process, the electrical takes a long time. 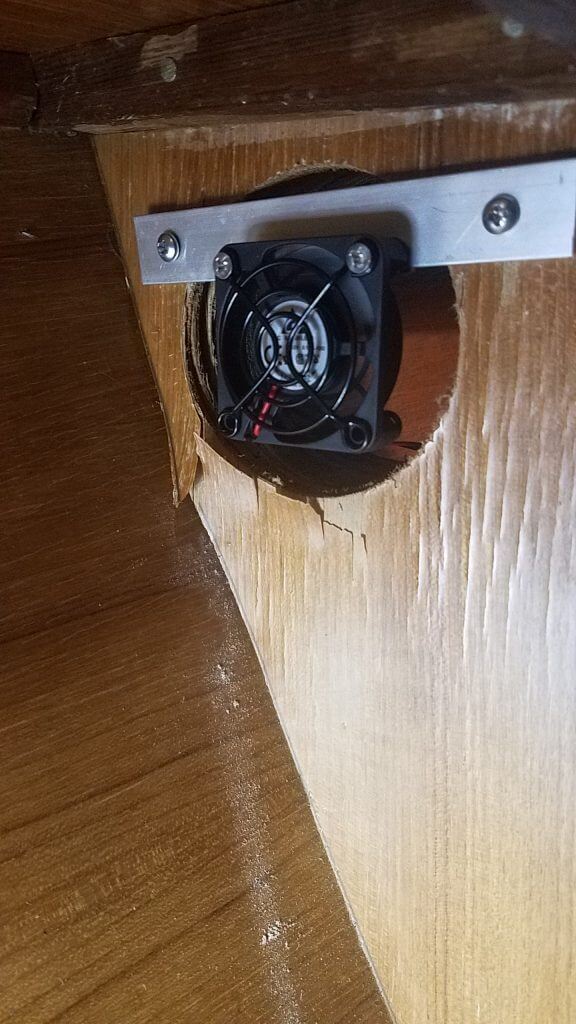 The first installed fan. You can see the peeling veneer (the white powder is just sawdust) from the moisture we had last summer. Fortunately, here in the locker behind the shower and along the hull is the worst place on the boat.

Over the course of the week, I completed some other smaller tasks as well. And I spent a lovely evening drinking some rum and chatting with the Canadian couple, Bob and Kathy. While their stories are always great, the show-stopper involved Bob’s experience aboard a commercial fishing boat that went down in a storm a hundred miles off the western Canadian coast. As should be obvious, I also learned a ton talking and consulting with Chris this week. I have mad respect for that guy’s skills, knowledge, and experience. All told, it has been another good week in the yard, but I am really ready to splash and get cruising.