The Florida Keys and Those Crazy Critters

Over New Year’s, Margaret and I spent a few days down in the Florida Keys, camping, snorkeling, and sampling as many bars as we could. While we were there, we managed to meet up with our friend Jonny, who is also known as one of Those Crazy Critters and probably by several dozen other monikers. I first met him when we had Bear on the hard in St. Mary’s, Georgia. As all yards seem to, St. Mary’s Boat Services brought together an interesting, varied group of folks. And one day Jonny came into the mix with his girlfriend on a twenty-two foot sailboat that they had bought sight unseen in South Carolina after answering a Craigslist ad from Chicago. Within a matter of hours, the two of them had ensconced themselves in the boatyard community and seemed like they had always been there.

Over the next few weeks, I got to know them better, occasionally taking them along on trips to Lowe’s, Ace, and the grocery store; making a few afterwork beer runs; and spending the evenings drinking rum and beer on Bear or, later, the new boat they picked up in the yard. Yes, that is right, shortly after getting to St. Mary’s, they heard about a 27-foot bluewater boat that had been languishing in the yard since its owner passed away. The bank now owned it and, with the monthly storage fees piling up, was motivated to part with it. The Critters ended up buying the sweet boat – with new sails, windvane steering, and more – for less than they were able to sell their 22-footer for. And this is far from the only wonderful thing that has befallen them. Some might say that the Critters are lucky, just in the right spot at the right time. While luck may play a role, after spending any amount of time with them, it seems clear that they meet the world with kindness, an open mind, and the willingness to work hard, and they reap what they sow. 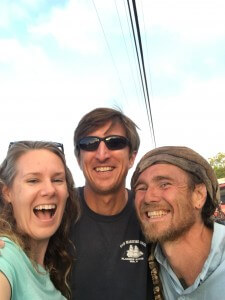 Jonny, Margaret, and me in Marathon

Unfortunately, I only got to spend about two weeks with the Critters before I had to return to Peoria. When Margaret and I came back to the yard several weeks later, the duo had already left on Winter’s Dream, the boat that they had bought, quickly got ready to splash, and renamed, honoring the previous owner – a Mr. Winter – and his plans for the boat. Following them on Facebook, I watched as they worked their way south, learning to sail, navigate, and otherwise run a boat along the way to Key West. Their stories of diving into sailing, getting by on a minimum of gear and resources, and living on the hook in Key West were incredibly inspiring. Faced with the inevitable cash crunch and boat repairs, the Critters got after it. They started performing in Mallory Square every night, dancing and eating fire for tips. And they befriended boaters of all stripes, labored for them, and got all the knowledge they could suck up in return. For me, the Critters’ lifestyle and outlook is an aspirational one, in the sense that I aspire to live as they do, open to the world. Their experiences, joy, and kindness encourage me to share and engage with others, be happy and content with what I have, and be open to and grateful for new experiences, lifestyles, worldviews, and everything else. I am not completely there yet, but I am working on it.

When Margaret and I were heading to the Keys, Jonny and his girlfriend, Darla, had just returned to Winter’s Dream, now anchored in Boot Key Harbor in Marathon, after spending the hurricane season in the Midwest. Having followed their adventures and occasionally messaged with Jonny, I was excited to catch up with him again. And having shared so many stories about the Critters with Margaret, I wanted her to finally meet them too. On our final day in the Keys, we got the opportunity. In typical fashion, the two of them have settled into the community, becoming a part of an extended family centered on a lovely older couple who own a few sportfishermen and provide for a crew of mechanics and deckhands, of which Darla and, especially, Jonny are the swabbies. We spent a few hours meeting their friends, hearing their tales of life aboard, and eating mahi sashimi that Darla had just caught on a recent trip. It was great to see them and once again be in the presence of their kindness and love. Hopefully, it will be less than two years before we see them again, and, if we can learn anything from the Critters’ lifestyle, Bear will be anchored up next to Winter’s Dream when that happens.

4 Responses to The Florida Keys and Those Crazy Critters