Catching Up with Caper, a Cabot 36

When we started this blog nearly five years ago, Margaret and I planned on buying a boat in three or four years. Quickly, we moved that time frame up and, before too long, began the search that resulted in us purchasing Bear. We chronicled that search in a series of posts that reviewed each boat we stepped aboard. Those early posts continue to get a lot of views – which always blows us away – through the long tail of Google, particularly the ones about boats that remained on the market. But none of those posts have been viewed as many times as the one on Caper, a Cabot 36 that we checked out in Indiantown, Florida. What’s more is that nearly a dozen folks have contacted us about Caper. Margaret and I have really enjoyed the way that Caper has momentarily popped back into our lives with these emails. And the stories that we have heard from people interested in Caper have given us added perspective on the cruising dreams that people harbor and the life of a capable, well-loved bluewater boat. Our experience with Caper came full circle after we left the Keys, when we stopped by Indiantown Marina to step aboard her once again as guests of her newest owners, Courtney and Jeremy. I will get to their story, but I wanted to share some of our earlier experiences with Caper first, so that you can better appreciate the boat through the eyes of those who have admired and sailed on her. 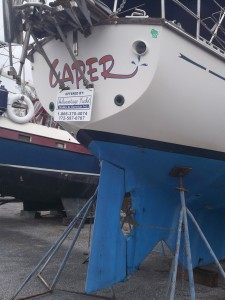 Just days after we made our blog post on Caper, a lovely woman named Patti contacted us with some specific questions as she considered putting an offer in on the boat. At the time, Patti was in the Bahamas aboard her Pearson 35. She clearly had some bluewater experience and knew sailboats well, and she was looking for a new boat that could take her into the South Pacific. Patti planned on heading to Florida soon to make a purchase, and Caper’s inexpensive price, upgrades, and gear had caught her eye on Yachtworld. Over several emails, we talked about the merits of Caper and discussed the two things that concerned her the most about Cabots: their reputation for poor performance to windward and the rudder problems some have encountered.

Margaret and I had considered the rudder issue, deciding that, if we were to buy a Cabot, we would rebuild the rudder preemptively. It would be a time-consuming job, but not one that would be overly expensive. Patti had done that work on her Pearson, so she knew exactly what the job would entail. She also floated a theory that the reason the previous owner had replaced the bowsprit was to deal with the Cabot’s notorious weather helm that, in her opinion, would, over time, stress the rudder to the point of failure. So, she was hopeful that fixing the rudder would prove to be unnecessary because of the bowsprit. 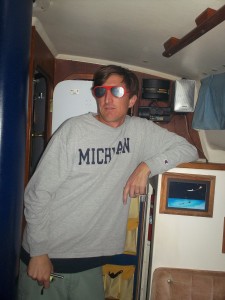 Sweet sunglasses that were on Caper

We had been far less concerned about Caper’s upwind performance than Patti had. But that was because we were looking for a full keel boat. For Patti, Caper was the outlier in her search, which was focused on boats that were a little more sprightly, such as the fin keel Bristol 35.5, Morgan 384, and Rival 36. After making the trip to the BVI this fall and having lots of time to contemplate how a half knot or two of boat speed can dramatically change passage time, I have a little more appreciation for boat speed now. But, at the time, I was not very sympathetic. Fortunately, Patti had connected with some folks on a Cabot in the Bahamas who were going to give her some firsthand experience. 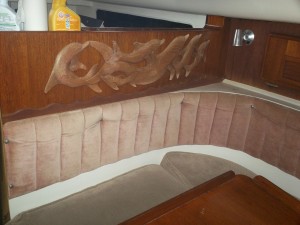 The pink cushions in the salon on Caper.

I do not know what boat Patti ended up with (though I would love to hear), but I know it was not Caper. Two months after I emailed with Patti, a man by the name of Paul made a comment on our post, indicating he had just closed on Caper. He was incredibly excited – getting tears in his eyes over his “amazing and unforeseen good fortune.” And, like Patti, Paul knew what he was talking about. He mentioned a circumnavigation in a Whitby 42 and a Bristol 30 that he currently owned and had taken at least as far as the Bahamas and seemed to have quite a few more sea miles and boats in his past. It was awesome to read Paul’s comments; his excitement and enthusiasm is palpable even reading them over again today. While he allowed that his fiancee did not care for the pink cushions in the salon, he positively enthused about everything else:

Caper is essentially ready to paint the bottom and launch for a safe and comfortable ride to the Bahamas (or beyond for that matter).How often do you see that in a boat this size in this price range? Did you look at that custom bowsprit? The overkill Lofrans Tigres anchor windlass. The oldy but very-goody (and recently reconditioned) Alpha autopilot? The airex cored hull? Even a high-end windvane and a wind generator. And, finally, the generally meticulous and thorough maintenance the current owner lavishes on her. New sails! 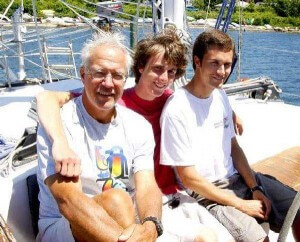 Paul Denton with his sons after his circumnavigation. From the Cape Cod TImes.

Paul had not necessarily found the boat of his dreams in Caper, but he had most certainly found the boat that would again make his dreams possible. Caper was in his price range, well-equipped, and, despite the bluewater creds of his Bristol 30, seemed to hold the promise of more ocean passages and foreign ports in his future.

This is part one of a two-part series on Caper. Next week, I will relate something about Paul’s experiences with the boat, introduce you to Courtney and Jeremy, and speculate a little on the appeal of Caper’s and other bluewater boats of her age and design.

One Response to Catching Up with Caper, a Cabot 36