The Final Push to Annapolis This Past Summer

In case you missed it, Margaret put up the final video in our race north from St. Mary’s Georgia to Annapolis. The video is great, but we did not quite capture all the emotions and excitement of that final day of the trip. Obviously, we need to do a little better job filming our adventures. But, in the meantime, I wanted to add a few more details to that final push.

As the video from the day before makes clear, as we headed out of Norfolk, there was a forecast for the winds and waves to build through the afternoon into the evening, especially as we moved farther north in the bay. Sure enough, by the early evening, we were seeing low 20s from our aft quarter with typical 2-3 foot bay chop-swell. Without a whisker pole or asymmetrical, we were struggling to keep our genoa full and rocking from side to side. As time went on, the autopilot had increasing difficulties handling the conditions, causing us to have to hand steer for periods. With Margaret feeling a little ill, a massive thunderstorm looming – though moving northeasterly – to our west, and the sun setting, we decided to head into Jackson Creek near Deltaville where we had spent a number of days the summer before. 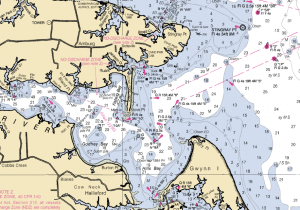 Jackson Creek and the mouth of the Piankatank.

While making our way through the outer bay at the mouth of the Piankatank River, Margaret was at the helm when the steering suddenly jammed. I had a feeling the autopilot arm had disconnected from the steering column and immediately tore into the lazarette to gain access. Sure enough, that is exactly what had occurred, and, rather miraculously, I was able to quickly free the steering. I then duct taped the arm to the top of the lazarette so that it would not again interfere.

With the sun below the horizon, we made our way through the winding, narrow channel into Jackson Creek and anchored just off the Fishing Bay Yacht Club. Tired and hungry, we left the autopilot for the light of the morning. Still, it felt good to be back on the Chesapeake in an anchorage that we had good memories of. But when we climbed into the v-berth, the wind was howling outside and the forecast was not looking any better for the next day.

We awoke without an alarm a little later than I would have liked, around seven. While I set to work on the autopilot, Margaret made us some breakfast. The weather seemed promising; a bit windy, but significantly lighter than it had been the previous night. The autopilot on the other hand was not looking so good. A big chunk of metal had sheared partway off the inner arm of the linear drive where it had been wedged into the steering column, preventing the pilot from being able to move too far to starboard. Fortunately, I was able to chip the metal off with a chisel and mallet and had it all back together in an hour or so. With that, we headed back out onto the bay. 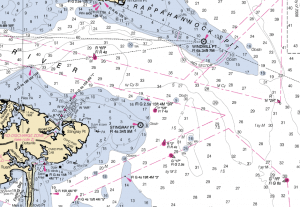 Stingray Point, the mouth of the Rappahannock, and Windmill Point.

As we made our way out the Piankatank towards Stingray Point, the wind was blowing at about 15 knots from the south. It seemed perfect, but I worried about what the wind and waves would be like out on the bay proper and what the weather would do as the day went on, especially considering NOAA had a small craft advisory through to the Choptank. But by the time we got to Windmill Point with all the fishing boats working the shelf, dolphins cavorting around us, and the sun shining down with a moderating breeze and just light chop, it seemed like Neptune would continue to smile on us.

With our sails out and the engine going, things got slightly more rough as we went by the mouth of the Potomac, as they always do, but still nothing like they had forecast. And, by the time we were off Point No Point, the wind had started to die away while we sped ahead of a sailboat working northwards the old fashioned way. Two hours later off the Patuxent with the sun starting to drop in the western sky, we did not even need to discuss whether we were heading on to Annapolis; the only question was whether we could possibly make last call at Pusser’s.

The sun set while we were off the Calvert Cliffs. With a tug and barge pushing up behind us, angling slightly westward to avoid a southbound container ship, we made our way towards the far set of greens, much further west than we needed to, but very comfortably out of the shipping traffic. We also took in the sails as the wind had dropped to nothing and, eventually, set a course directly for Thomas Point Light, which we could already see more than fifteen miles away. 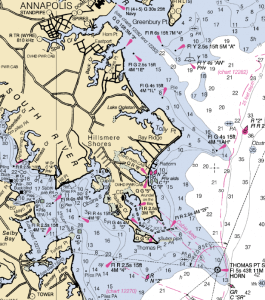 Thomas Point, the Severn, and Annapolis.

The push north in the dark was uneventful but lots of fun as we hung out on the foredeck, talked about our adventures on the Chesapeake the previous summer, and continually calculated our odds of getting a painkiller. We did have a brief moment of panic when we finally reached Thomas Point. With Margaret manning the spotlight on the bow, we were desperately looking for the unlit “SR” marker. Though based on the chartplotter, we passed within a few boatlengths, we never saw it, but we also did not hit it, so everything turned out fine.

The rest of the way to the Severn, making sense of all the lights – three ocean-going ships were anchored up, the lights from the bridge loomed, and all the Navy radio towers flickered confusing the actual navigation lights. But eventually we made the red “2” marking the mouth of the river and started our final approach. With all the navigation lights leading us in, we were counting the time between the flashes to confirm our position and then finally conning our way in by sight when we turned into Spa Creek.

Easing into the mooring field, we ghosted up to a ball, and Margaret picked it up without a hitch. I left the helm, ran forward, and secured the pennant to the bow cleat. Then we turned off the electronics, put their covers on, and cut the engine. I was already down below, and as Margaret started to make her way down the companionway, I wrapped her in a big hug. A tear rolled down my cheek as I kissed her, so excited to have finally made it and so proud of our effort over the past two months getting the boat ready, two weeks pushing her north, and two hours making our way in the dark. It felt – and still does – like a great achievement, even if it was a rather ridiculous and ill-planned adventure. After our embrace, though, we looked at the clock and it was 11:58, just a few minutes too late for Pusser’s.