Our New LED Dome Light Bulb and Our Energy Situation Aboard

We have a new video up today about the LED dome light that we purchased from AhoyCaptain at the Annapolis Sailboat Show. I figured I would say a little more here about how the light fits into our overall energy plan and where we are in implementing that plan.

In our first days on the hook two summers ago, we quickly realized we would need to supplement our batteries with solar or wind. Actually, we were cognizant of the need for an alternative source of power even before that; we had read all the cruising magazines and blogs. But during our first days at anchor in Port Jefferson, while I anxiously checked the battery charge way too frequently, we began to understand how many amps hours we could get out of a full charge of our twin 8D batteries and how much all our systems used. There was certainly an imbalance between the two, and we ended up running the engine after two days so that we could charge our batteries back up. 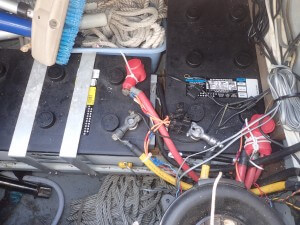 Since that first week with Bear, we have learned to ration our energy use a bit better and only end up charging the batteries once or twice a summer when we are at anchor for a particularly long time. For example, this past summer we ran the engine to charge once while we were on a mooring in Annapolis for two weeks and once when we were on the hook in St. Michaels for nearly a week.

That first summer we made an energy inventory of our boat. The paper itself is buried somewhere in our boat documents, but the general picture was that we could maintain everything aboard – even with using the inverter more than we currently do to charge computers and other items – minus the refrigerator almost indefinitely on one 80 watt solar panel. 160 watts of solar would allow us to run the refrigerator for two hours a day, maybe more, depending on the level of sunlight and our other usage. While that does not sound like a lot of refrigerator time, we currently run it for about 30 minutes a day when at anchor and rely on ice to keep our food cold, which does not always work when we forget to buy ice.

In our minds, the audit made two things clear. First, solving our energy woes was going to be relatively easy. And, second, we needed to do something about our refrigerator, which draws a staggering 18 amps. So, our current plan – more or less – is to replace the refrigerator with a new unit that draws in the neighborhood of four amps and get at least 80 watts of solar. Along with that, we will try to reduce our energy usage by replacing our traditional cabin lights with LEDs. That should take care of our energy needs until we are cruising full time, at which point we will probably want to add another panel and/or a wind generator, but we will let our energy consumption dictate that when it comes time.

Now, back to the show in Annapolis last week, energy was high on our list of things to look into. We wanted to do some research on solar systems and refrigerators (both of which we will have more information about in some future posts), find replacements for our LED dome lights, and price new LED reading lights for our bunk and the nav station.

With dome bulb in hand, we stopped by AhoyCaptain and explained our needs. We also related our experiences trying to replace these lights via the internet, which involved us trying out four or five different bulbs, none of which worked because we got the incorrect model or the light was too dim or off color. The sailing couple who own the company assured us they had the solution, quickly found the right LED replacement for our bulb, and showed us both how to put it together and how it looked lit up. It also turned out they live a half hour from where I grew up in Jersey and have plans to go cruising soon themselves, so we chatted for a while about all that. 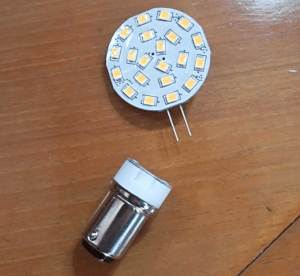 Our LED bulb and adapter.

Back on the boat, we tried out the light, and, as you will see in the video, it worked beautifully, reducing our energy consumption for a single dome light from 2 to .2 amps for twenty-seven dollars. We will be going to www.AhoyCaptain.com to get replacements for our six other dome lights soon.

Check out the video to see this light – there is both an adapter and a bulb – for yourself. At the boat show, the adapter portion was five dollars. The model number for the adapter is ILBA1142/56-G4. The bulb itself was twenty-two dollars at the show, and its model number is ILSPG4-21W-B. Of course, your bulbs are probably different than ours, but I bet the friendly couple at AhoyCaptain will be happy to help you find the right replacement if you give them a call or shoot them an email with the bulb’s model number or a photo of your bulb.

We do not have any connection with AhoyCaptain (though we would love to!), we just thought they were helpful and friendly, and I am pretty geeked about the huge reduction in energy consumption.