With Suwendejen – and the less than helpful broker – behind us, Margaret and I got some breakfast in Fort Pierce and then drove across the state to my folks’ house near Charlotte Harbor. During that time, we talked a lot about boats and decided we wanted to try and get on more while we were in Florida. Before leaving Illinois, we had created a spreadsheet of nine boats we might want to look at over break. Once we made it to my folks, we went through all the listings on Yachtworld and expanded that list to about 20. That meant that our list now had boats that we felt were good values and others that we just wanted to check out so we could get a feel for the design and learn a little more about what to look for, though we would soon discover that there was little distinction between these categories. And, with that, we promptly called a broker down the road in Punta Gorda who had a Bayfield 36 for sale.

The next morning we awoke early to head the 45 minutes south to Burnt Store Marina, the exact same location where we had chartered Sojourner from in December 2012. Walking into the broker office, we were greeted by two friendly older gentlemen, one of whom conducted us down the dock and out to Tristan Joseph. Yes, the boat had a male name, which is unusual and, by some accounts, bad luck (you can decide whether Karl was one such name). What’s more, the owner was a bachelor who was now getting up there in years and could no longer take care of her, which, based on the condition of the boat, is definitely bad luck. In addition, the boat had been on the market for a long time as the owner reluctantly dropped the price a few thousand dollars every couple months. 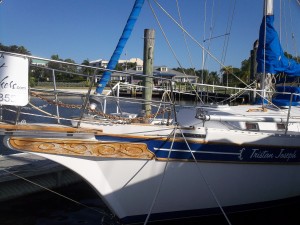 Stepping below felt like walking into a bachelor’s house. You probably know the feeling from looking at real estate: a certain smell, strange renovations, little evidence of routine cleaning, and odd accoutrements, like, in this case, an early 1970s vacuum. Of course, all of this could be remedied by disposing of a lot of the crap, thoroughly cleaning the cabin, and making a few changes to the interior. But it was still off-putting, especially as it was my first time on a Bayfield 36. I also was not too excited about the navigation station, which was forward, across from the head, with a flip out chair that sat perpendicular to the centerline of the boat. It seemed a bit far from the companionway, making it difficult to quickly look at a chart or glance at the radar. Moreover, as it was situated, I imagined rocking through sixty degrees on passage while trying to plot our position, figure out the approach to a harbor, or keep up with a daily net on the SSB. 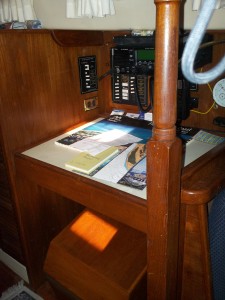 Beyond the bachelor funk and boat design, there were also serious issues that would need to be addressed on this boat. The life raft – a nice addition for sure – was years out of date. The anchor chain was nearing the point of being one solid mass of rusted metal. The hatches and ports all need rebedding and new gaskets, if not complete replacement. The binnacle compass was yellowing and needed replacement. The standing rigging was showing some signs that it needed replacing, which I imagine would have been confirmed by a survey. All the thru-hulls needed replacing. And it seemed that every time I opened a locker or looked in the bilge, I was greeted by rusted wiring and ancient hoses. 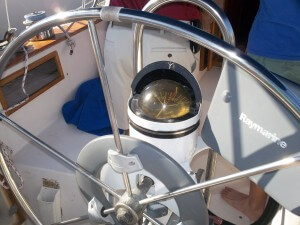 There were also other issues that bothered me about the boat. For instance, the propane locker was accessible from the cockpit with no outside drain. That means that a propane leak – because propane is heavier than air – would pool in the cockpit and flow down into the cabin, where it would pose an extreme danger. Only slightly less dangerous, moving forward from the cockpit presented some difficulties. The Bayfield has an oddly shaped step out of the cockpit that I imagined would trip me up when I was hurrying to and fro. And there was nothing to hold on to once you left the safety of the cockpit until you reached the cabintop handholds near the stays. The engine access is also less than ideal. There is the traditional access to the forward part of the diesel through the companionway steps. However, to really get at more of the engine, one would need to go through the lazarette on the starboard side, which still only provided access to that one side of the engine and would be a real pain in the ass. With these many problems – without even thinking about the condition of the sails or the engine – it was easy to eliminate Tristan Jones. I suspect the old bachelor and the poor brokers will have to endure many more months of occasional, reluctant price reductions before this boat finally finds a new owner. More importantly, I also came away with a poor impression of the Canadian made Bayfield. But at this point, we – mainly because Margaret saw a glimmer of hope in the vessel, as you will see – kept the design on our list of possibilities.

Tristian Joseph has a lot of the characteristics I am looking for in a boat – a U-shaped galley for sea safety, an aft cabin for visitors or crew, a v-berth with plenty of storage, a head that sits midship rather than in the bow, and a butterfly hatch. Some of these are more important than others, and from what I learned on this vessel, that the sum of some good parts does not make a perfect whole.

The Bayfield 36 has a nice waterline and fiberglass decks. While I would love to have a boat with well-maintained teak decks, I know that it would require constant maintenance and while I am prepared for “fixing boats in exotic locations,” I am not as excited about the effort required to maintain good looking, leak-free teak decking. 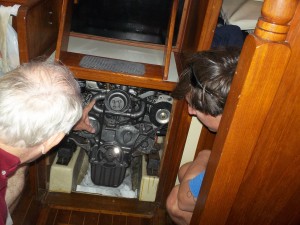 The interior of this Bayfield 36 had a small but functional galley. Unfortunately, the bachelor owner had made some modifications to the lockers, including black plexiglass sliding doors, which helped date the boat to the early 80’s. If we bought this vessel that would be one of the first things I would change. 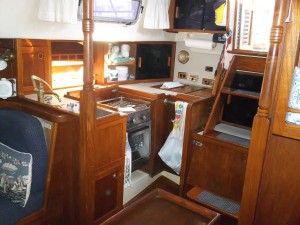 While the galley wasn’t pretty, it was small but functional, with plenty of storage space for provisions. It also had a large port directly over the stove which allowed for natural light to pour in and a nice view while cooking.

Across from the galley is the aft cabin. We added the Bayfield 36 to our list as it is one of only a handful of boats under 37′ to have two cabins. Unfortunately, I do not have an image of the aft cabin to share, but it does have a single berth, a hanging locker, and ample storage. (We will have a future post about another Bayfield 36 which will have images of the aft cabin)

Forward of the galley is a straight settee to starboard and an L-shaped settee to port with a fixed, winged table off to the port side. The table has small storage compartments on the top and sides and opens to accommodate 4-6 comfortably. The top is white formica surrounded by wood rails – ugly but functional. 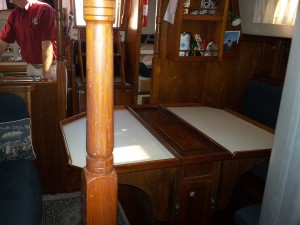 A beautiful butterfly hatch illuminates the saloon and allows for great ventilation. Forward of the saloon is the nav station and head. Jeff mentioned the nav station above, but just to reiterate, it is on the starboard side and faces starboard, rather than forward. It has a nifty fold away attached seat below the table and plenty of storage for charts and accessories. While this seems like a nice desk or place for sewing at anchor, it is problematic that the nav station is so far away from the cockpit. We see this as a major detractor from the design of this vessel.

The head is to port and is a good size with a separate shower stall. The forward cabin has a double berth to port and generous storage lockers and drawers to starboard. There is also a large hatch and a port light for ventilation. As I said before, this Bayfield has many of the design elements that I am looking for in a yacht. I like the way the space is utilized save for the nav station. The proportions seem right and it does not feel compartmentalized and cramped the way some of the other boats of this size do. Aesthetically, this boat would need a facelift in the galley and saloon to bring it into the 21st century, but that is simple and inexpensive work. While I consider this a contender, though low on the list, Jeff has nixed the design altogether.

Here are some additional images – click on image to enlarge: 2 Responses to The Bachelor Pad – A Bayfield 36 (joint post)