To put the list into perspective, Sasha and David are staying at an inn in Cruz Bay, and we do not know whether they will spend a night aboard. So we are not contemplating going far into the BVI should we go at all. And we do not know if they will want to or can come all the way out to Leinster every day. Likewise, Sasha and David are divers who may or may not be diving while they are here, but have already indicated that they are interested in doing a lot of snorkeling.

As you know from the last time we were together on a boat, all of this is weather dependent. Down here, the weather we are worried about is just increased trades and a north swell. This will be forecasted well in advance. And such weather will just limit our ability to comfortably move the boat and be on it. It will still be warm, and we can still explore in the water and on land no matter what. 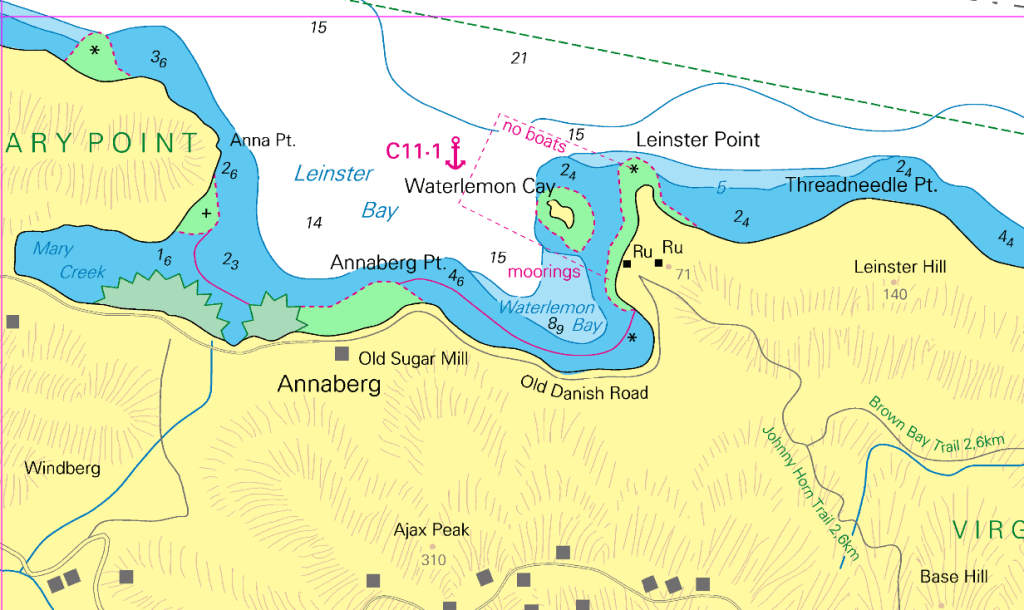 Chart of Leinster Bay and the surrounding area, from NV Chartkit 12.1.

We have found so much good snorkeling around the bay, and we have not even explored all of it yet. In fact, yesterday we found another cool spot where it drops from about five feet at the beach to 40 feet rather quickly with corals and tons of big fish. You could easily spend the whole week here in Leinster, and you would just start to get to know the place.

There are also a couple trails, including:

Annaberg sugar mill ruins are here to explore too. They are some of the most extensive ruins on the island.

Of course, we can always hang out on Bear as well. 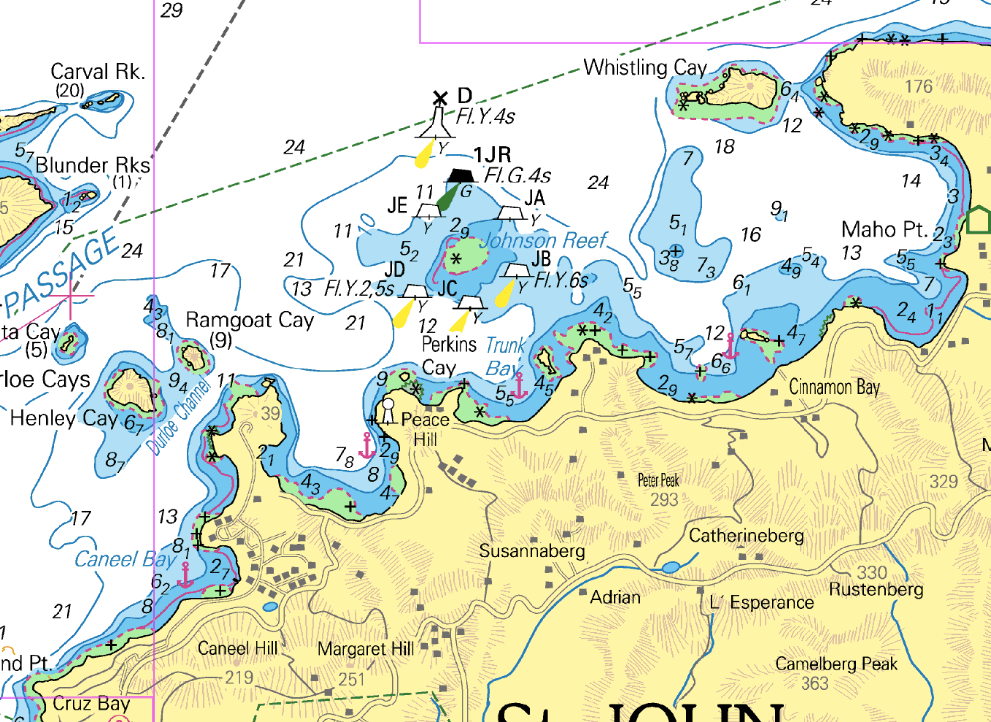 The north shore of St. John from Lind Point to Mary Point.

This is a larger area than Leinster and pretty much incorporates the rest of the northern side of St. John. The following suggestions go from the east – around the corner from Leinster – to just around the bend from Cruz Bay in the west. 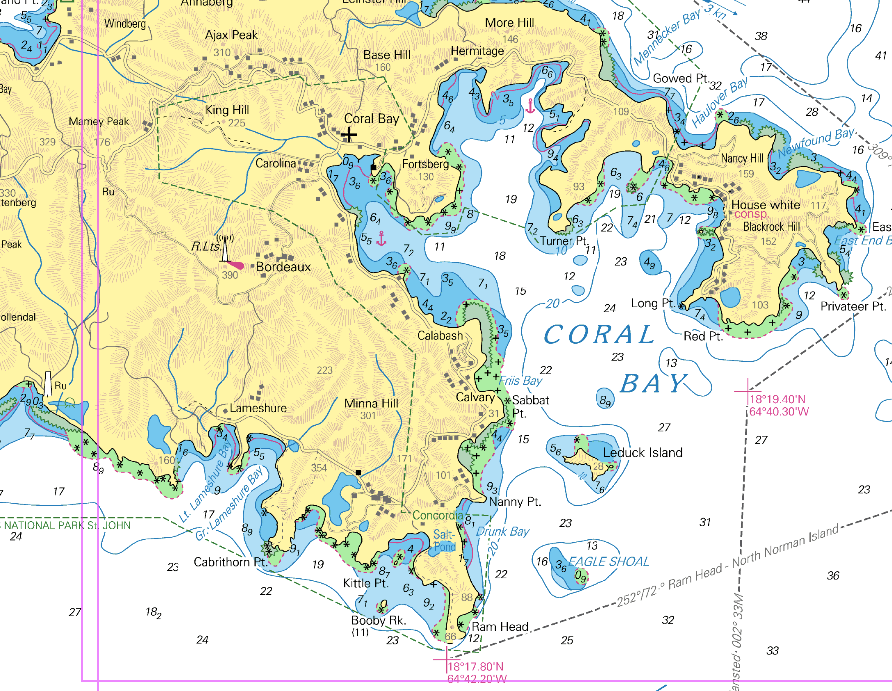 Coral Bay and some of the south shore of Saint John

We really do not know the south side of St. John as well as the north. In fact, we have not even been over there with Bear yet. There are surely other cool things over there, including a number of snorkel and dive spots on the NPS map.

Carvel Rock snorkeling – short hop north of St. John for what some consider the best snorkeling in the USVI

Christmas Cove – USVI marine preserve with snorkeling and Pizza Pi, a floating pizza restaurant; we could overnight here or just hop over for the day from Cruz

It is not too practical to just go over to the BVI for the day by the time we check in, check out, and then check back into the USVI. But you could take a ferry to Jost or we could easily go for a night or two. There are two points of entry that we would make use of, either Jost Van Dyke or Soper’s Hole. While we could go anywhere, it sort of makes sense to target areas around one or the other. 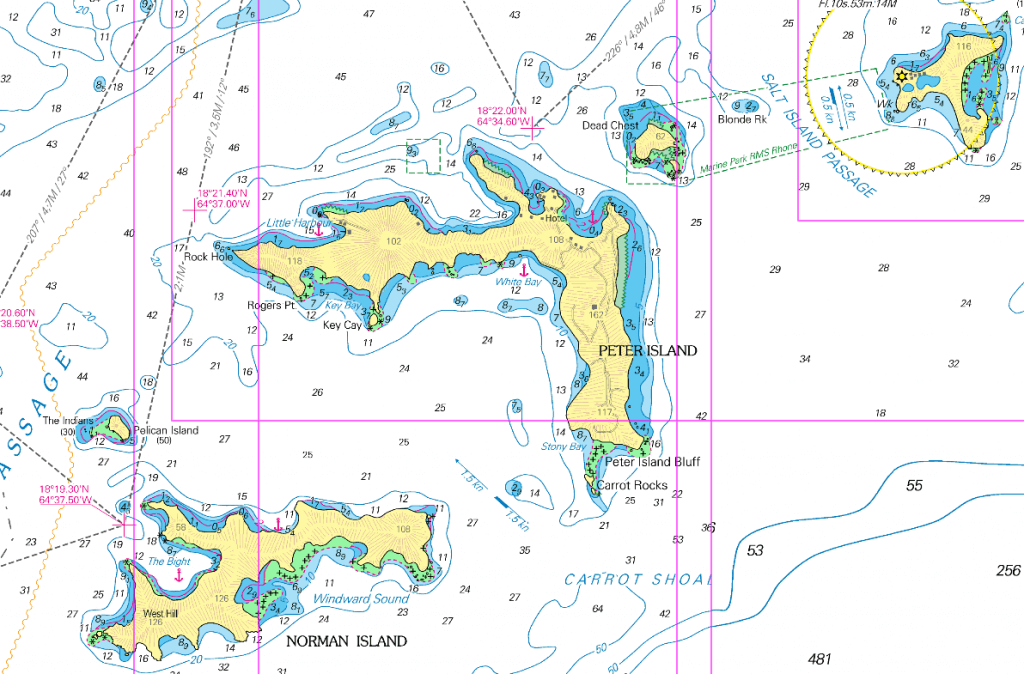 Norman, Peter, and Salt Islands in the BVI