Saturday morning we wore up early to get the Genoa bended on before the sea trial. We had plans to meet with Phil, our surveryor, at 9 am for coffee to get reacquainted and ask a few questions about what we would cover during the course of the trial. We met at Common Grounds, a great local coffee shop in downtown Branford, and enjoyed a quick meal with Phil while runners and other early risers swarmed around us.

When we met back at Bear, Hal, the broker, was there as well as David and Jeannie, the former owners. After we chatted for a bit, Phil said that we could go over some of the systems while still tied up at the dock and that David and Jeannie could come back later for the sail. We quickly got to work, going over the information that Phil had collected back in February during the initial survey. We discussed the more important repairs and safety equipment and then he jumped in the lazarette and began to tackle some issues he had found with the electrical systems. 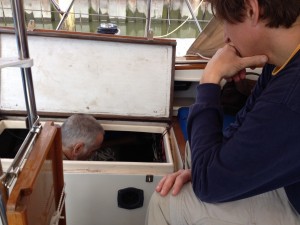 Phil checking out the batteries in the lazarette


Each step of the way, Phil gave us detailed descriptions of each system, how all components should function, what repairs may be needed, or replacements we should consider. He was a kind and generous teacher, willing to share his knowledge freely and easily, never losing patience with the multitude of questions we posed.

After determining that the vessel was ready to sail, we rounded up David and Jeannie, who have their new Nordic Tug docked about 5 boats down from us at the same marina. It should be mentioned that they are very reluctant sellers and we feel very sad for them to have to part with her. Jeannie had an accident about two years ago that nearly killed her and she is still recovering from her injuries. Because of this, they felt that they could no longer handle Bear, and sadly, have transitioned to a powerboat.

Once we were all on board, Phil asked David to captain the vessel, because of his knowledge of her systems and the waterway. We slowly motored down the Branford River, past a handful of marinas, including the Dutch Wharf Marina, a boatyard that specializes in wooden boats, where David’s father had kept his boat. As David steered, Jeannie and I chatted about the beautiful boats that lined the river, while Phil and Jeff continued the survey below. 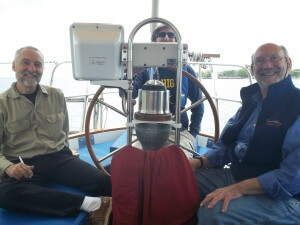 Phil, Jeff, and David during the sea trial

Out in the open water of Long Island Sound, we put up the main and genoa to check their condition and spent some time working over the engine. We also checked all of the navigational equipment, including the speed, depth sounder, and radar. 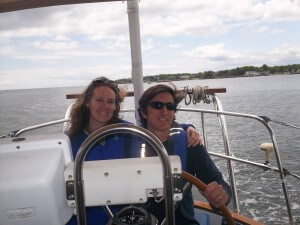 Proud new owners at the helm for the first time! 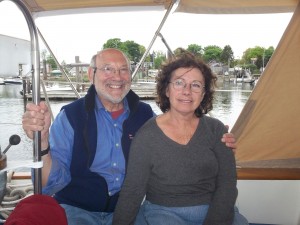 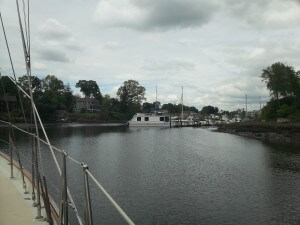 When we arrived back at the dock, the bilge pump clicked on (and the belt jumped off), which prompted Phil to check the head. Much to our dismay, water was coming in through the toilet! Ugh! After securing the seacock to stop the flow of some very nasty water, Phil determined that we needed to rebuilt the pump on the head. He then looked at the bilge pump and was able to fix the issue with the belt that we thought we had fixed the night before.

All-in-all the sea trial was a success, with only a few, mostly predicted, issues with the boat. Phil recommended that funds held in escrow pay to replace one of the batteries and rebuild the head. As he packed up to leave, we cut him a check for some of the best spent money we have ever paid. The sea trial proved to be a crash-course in bluewater cruiser systems, knowledge that would have taken weeks, if not months, for us to learn by trial and error alone.

3 Responses to Sea Trial and Tribulations