Replacing the Chainplates: Now or Later

It is nearly 9pm on Monday evening, and I just made it back to the boat after flying in from Peoria. My flights were not too bad, especially because I got a first class seat for the last leg into Jacksonville after I got bumped off my earlier flight. Bear seems to be in fine shape after spending the last couple days by her lonesome. I, on the other hand, am feeling ambivalent, missing Margaret, but excited about getting some work done here on the boat. 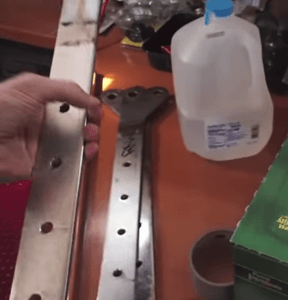 A couple of the chainplates on the nav station, with beer (Sierra Nevada Torpedo and water) 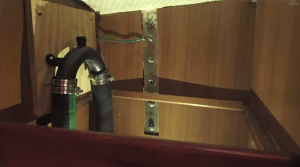 Our forward port chainplate before disassembly and removal

Margaret and I spent a bit of time over the weekend talking about what still needed to be accomplished before we splash in May and what we can hold off on until next winter. Amongst the jobs we discussed, nothing loomed larger than replacing the chainplates.

On one hand, we are contemplating just re-bedding the chainplates as they are for the summer season. We do not anticipate doing any serious offshore sailing other than a couple one or two night hops offshore this summer. In their present condition, there seems no reason to believe the chainplates and knees will not hold up to any of the conditions we are likely to encounter. And getting some new caulk on them will prevent any further ingress and accompanying corrosion. Moreover, we priced new chainplates from Port Townsend Foundry, where most Tayana owners seem to be buying new external plates from, and it would be over a grand for the six side and one backstay chainplates. With our budget already tight, we could certainly use another few months to save up for that purchase. Finally, the lead time on the chainplates are anywhere from 4-6 weeks. That would mean more time away from Margaret and chores I should be taking care of in Peoria as I would need to come down to St. Mary’s again in late April to install the chainplates in the three weeks before we plan to depart. 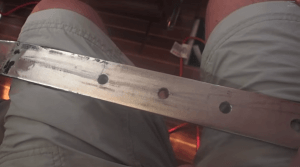 Our chainplates generally appear to be in great shape, like this one.

On the other side of things, we already paid to take the mast off the boat; replacing the chainplates now would save having to pull it again next winter. I also already put all the time and effort into removing the chainplates. Combining the effort of re-bedding the plates and taking them out again next year, I will surely end up spending a good week doing work that is, relatively speaking, a waste. Additionally, no matter how good the condition of the chainplates and knees appear, we are still going to worry a bit every time the wind pipes up this summer. 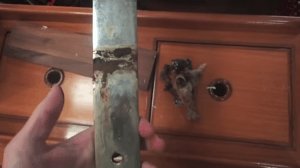 The backstay chainplate, which is probably the worst condition-wise.

Despite talking over the issue for an hour or so and then ruminating on it the rest of the weekend, we never came to a decision. We figure we have until next Monday to make up our minds because that will give us the full six-week lead time should we order the chainplates. 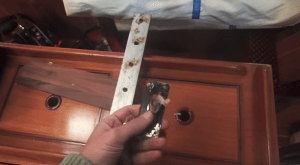 It was time-consuming to remove the chainplates, including removing the covers and breaking free of the caulk. 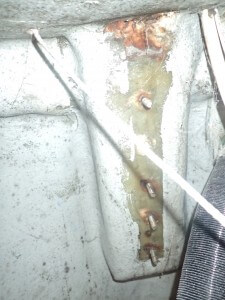 To tell you the truth, while all the issues listed above are definitely impacting our decision, my nervousness about replacing the chainplates is also weighing on the choice. I have read enough about the process of switching from inboard to external chainplates (fixing the knees so we can go with the new internal chainplates seems like even more work and a less desirable outcome) to know what we have to do, namely fill the void behind the knees with epoxy and drill new bolt-holes through the stainless backing plate of the current knees and out through the hull, before attaching the new chainplates with butyl tape. It might not sound like much to many of you, but it all worries me, especially the part about drilling some holes in the hull. What is more is the idea of doing this for the backstay chainplate, whose knees – or at least the bolts coming out of them – seem to be in the worst shape of all (with the possible exception of the aft starboard knee, where the top bolt sheared off from corrosion). There is virtually no lazarette access to the canoe stern of the Tayana. In fact, as I explained on the video about removing the stern chainplate, I actually had to put an inspection port in one of the cockpit lockers in order to merely reach – arm totally outstretched – the nuts on the chainplate.

I know putting off the work for another year is not going to make it any easier, but I entertain a hope – misplaced surely – that I will become more comfortable with the boat and, even more so, boat work over the coming year and, therefore, be better prepared for the job at that time. More rationally, I also worry about having to complete the work so soon before we are set to sail off for the summer, which is an adventure that we have been looking forward to at least since we finished our last summer cruise. If I screw up or have problems while replacing the chainplates this spring, it will mean delaying and shortening our time aboard this summer. 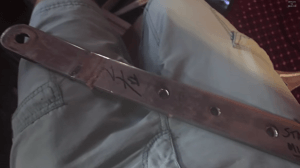 In case we had any doubt about the chainplates’ age, the Taiwanese characters from the Tayana yard were still on all of them.

So, we continue to debate what to do. We will be sure to let you know our decision come next Monday.

2 Responses to Replacing the Chainplates: Now or Later