Today was a fairly good day. The sunshine and comfortable temperatures certainly helped things, but what really made it was the knowledge that I am definitely on the mend. My throat is still somewhat sore, and I have an occasional cough. However, after the last few days, I can live with it. Margaret has recovered some too, but she is, unfortunately, still suffering from our cold more than I am. In addition to the fine weather and improving health, we also made some progress on the boat today, even though we still only worked for about four hours. And, to top off everything else, our two large orders came in today, delivering us our much-needed materials.

The first order arrived by USPS this morning, so we had more parts – mainly hose and plumbing fittings – when we went to the boat. I dove right into replacing the hose out of the manual bilge pump. Margaret and I then tested the pump, and everything proved to be in working order. As anyone who has ever dealt with a Whale manual bilge pump knows, the pump is fairly simple and easy to rebuild, and the same can be said for the hoses that come off it in either direction. But not having a working manual bilge pump, especially with our really slow electric bilge pump, made me really nervous. I am happy to know that the entire system is once again up and running in perfect order. What will make me even more pleased will be to install a high water alarm and a second manual bilge pump somewhere in the cabin. Both are on our list of things to do this offseason, though I am not sure the latter will actually be completed by the time we splash given how many other things we also really need to take care of.

After working on the pump, I turned my attention to removing the hardware that we are going to rebed. During our survey, there was a very small area of elevated moisture around our aft starboard dorade box. Our excellent surveyor, Phil Gaudreau out of Connecticut, and I also noted that there was a single rusty drip along the interior of the hull inside the galley cabinet, right next to the seacock that gives me so much trouble. At the time, we thought the drip had come from a small weeping leak at one of the stanchion bases. Since Margaret and I plan to annually rebed a portion of our deck hardware as part of our regular maintenance, we decided to start with this area of the deck, being that it is the only section showing any signs of leakage. 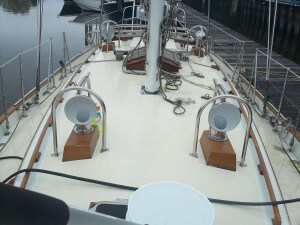 Here is an image of our two forward dorade boxes and vents.

Margaret had already taken the screws out of the grab rail around the dorade box earlier in the day, so I began to try and remove the stainless steel rail from the deck. Because I was worried about cracking or gouging the gelcoat and fiberglass by using a screwdriver or chisel to pry, I initially cut a few wooden wedges, thinking they would be a better option. Probably because I used a standard SPF (spruce, pine, fir) 2×4 for the wedges rather than a hardwood, when I hammered the wedges in with my rubber mallet (one of my favorite tools that seems to have hundreds of uses on a boat but far fewer ashore), the stainless steel just bit into the wood rather than the wood exerting any leverage on the caulk. Next, I changed course and brought out the heat gun, which was left on Bear by the previous owner. I have been looking forward to using the heat gun for the first time, but have yet to have a real opportunity. The gun proved up to the task as I employed it, two carefully placed screwdrivers, the rubber mallet, and some patience to break the caulk seal and get the rail off. Let me tell you, it sure felt good when that first seal eased apart. Even better was managing to make it happen without damaging any of the fiberglass.

Next, I turned my attention to the screws that held on the dorade box. Three of the screws came out rather easily, but the third was not only somewhat varnished over, but also appeared a bit stripped. After cleaning the screw head off as much as possible and using a rubber band over the tip of the Phillips screwdriver, I still could not get a good enough purchase on the stripped screw to turn it. So, I broke out the Dremel, hoping to incise a new, straight channel in the screw top, allowing me to use a flathead screwdriver. Given the angle and limited space for the Dremel, I had my doubts that it would work. But, fortunately, I succeeded in making the slot and then was able to gingerly back out the screw.

At about that point, around about 3:30, Margaret started to feel really lousy. So, we headed over to the grocery store to get some fresh veggies for a dinner stir-fry before I dropped her off at the hotel and then returned to the yard by myself. Over the next hour, I began cleaning the remainder of the caulk off the deck and stainless steel, anticipating the rebedding after we get some butyl tape. While doing so, I started to think more about the findings from the survey alongside some of our experiences on Bear over the summer and the evidence in front of me. When we returned to the boat last week, there were a few drips coming from the outer edge of the cabin top, just outboard of the dorade box. And, today, the screws holding the dorade box in place seemed to have little or no caulk on them. I am starting to think that some water might have been slowly seeping in through one or more of those screw holes, and, after rotting some of the core – causing the elevated moisture readings – getting in the headliner somehow, perhaps through a hole from a screw from our wooden grab rail. Then, the water could seep downhill and emerge at the edge of the cabin top. Obviously, we will have to investigate more tomorrow. 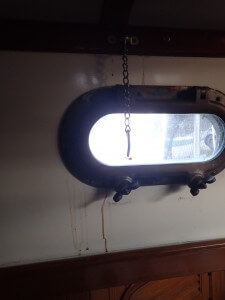 You can see the couple drips that greeted us last week

While thinking about the possible source of the elevated moisture readings and the very minor leaks we have seen, I turned to cleaning up our tools, securing a tarp over the area of deck I was working on, and, finally, closing up the boat. It was beautiful at that point in the day, with the sun setting over the marsh and silence descending on the boatyard. I am optimistic that Margaret and I will both feel a great deal better still tomorrow, and we will be enjoying that same scene together, satisfied that we put in a long day and accomplished much. By that time, I might even finally feel like having a beer again.

Be sure to watch our video of the day’s activities, if you are interested. 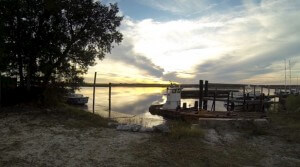 Sunset over the marsh from St. Mary’s Boat Services