Day five was a big day for exploring. In the morning, Jeff took Sasha and David to Dive Abaco after listening to the Cruiser’s Net. While they were gone, I tidied up the boat a bit and made some breakfast tacos. When Jeff returned, we read for a while on the trampoline and took in the beautiful morning sky. The previous evening we had discussed our need to reprovision the boat, and Jeff and I decided that we could take care of this chore while they were off diving. So, we headed to shore and spent the next couple of hours walking around the business district of Marsh Harbour. 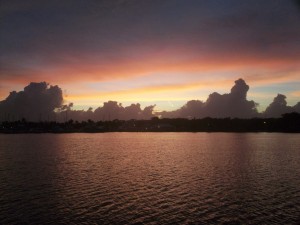 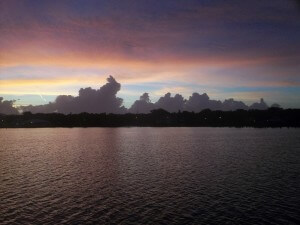 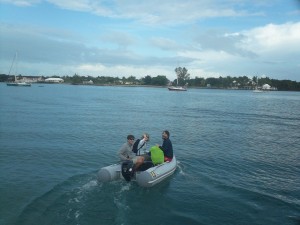 Our first stop was at Bristol’s liqour store, which is about a 5 minute walk from the Conch Inn dingy dock. They have a huge selection of liqour, beer, and wine, some priced well below what we would pay in the U.S. and others priced as if it was liquid gold. After drooling over some tasty looking rums we picked up a big bottle of Baileys and headed over to Maxwells. On the way we got lost, but got to see a much more lively Marsh Harbour than on our previous excursions. Locals zipped around in little cars, music played, and people met up outside of the laundromat. I asked a kind stranger for directions, but not before we had gone about 1/2 mile out of our way! At Maxwells we stocked up on fresh veggies, salsa, chips, and cheese. I also hunted for clothespins to secure our damp clothes to the lifelines to dry, but they were currently out of stock. 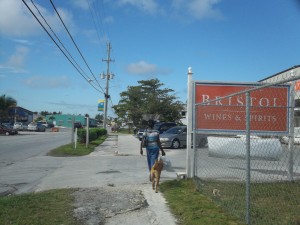 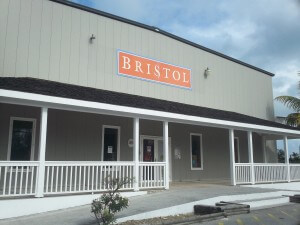 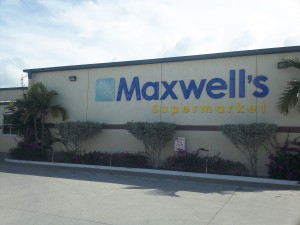 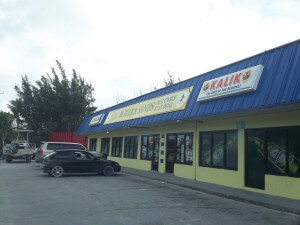 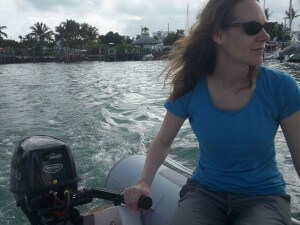 Driving the dingy back with our booty!

On our way back to the boat we walked past a road side stand where the purveyor would prepare you a conch salad to go. The man effortlessly removed the meat from the shell and diced it up ceviche style, tossing the shell onto the rocky shore below. A small crowd gathered around to get a sample of this local tradition.

Our last stop was at Double R’s to pick up a few gallons of drinking water. This was a wise move as we were loaded down with bags at this point in our trip and only had to hobble a short distance across the street with all of our booty to our waiting dingy.

Back on Spontenatity, Jeff and I looked around the harbor at the array of boats anchored nearby and discussed their shapes and designs. After a short discussion, we decided to go and knock on a few hulls, hoping for an invite aboard. We had guessed that one of the boats was a Westsail 32, one of the boats on our list, and if we could get onboard one here, it might save us a trip across FL when we returned to the states.

The first boat we pulled up to was a well-used Southern Cross 31 – the same boat design that we had looked at in Georgia the previous week. We rapped on the hull and woke the 60-something single hander from his siesta in the cockpit. While he did not invite us onboard, we did share a few stories about the boat that we saw and about his adventures in the Bahamas. Though our encounter was brief, it put the condition of the Georgia boat into better perspective.

The second boat we approached was the Westsail 32. The owners, Rita and David, were busy below changing the oil. But, after exchanging a few pleasanteries, they invited us to come back over in 20 minutes for a look at the boat. We took them up on the offer and got a quick tour of the cockpit and cabin as well as some advice on simple modifications they had made to make better use of the small space. We sat down with them in the salon and told them a bit about ourselves and our sailing dreams and they shared freely their experiences, both good and bad. I felt like I was hanging out with old friends, just as I had read about in many books and blogs, the way that cruisers bond quickly and deeply.

We surely would have liked to have taken them up on their offer for cold beer, but we were already running late to pick up Sasha and David from their dive. We bid Rita and David a quick fairwell, but not before getting their blog info. You can follow their journey here.

We picked up our rightfully grouchy friends, who had been waiting (im)patiently for us at the dingy dock for about an hour. We thought for sure that we would have seen the dive boat coming while we were aboard s/v Whisperer, but clearly that was not the case. Back on the boat, a quick and delicious lunch calmed all tempers, and we decided that we would sail to Settlement Harbor on Great Guana Cay.

The sailing was awesome! The wind was warm and the sky and water showed brilliant shades of blue and green. We worked together as a team to hoist and trim the sails and navigate into the small, protected harbor. Unfortunately, as novice crew, we showed our skills, or lack thereof, when we tried to pick up our first mooring ball. I tried to follow Mark’s directions and use the hook to point at the ball so that Jeff could see where to manuever the boat. I missed the ball on the first pass so we came back around for another try. This time I grabbed it easily but we were too far away for me to pull it in and I had to decide whether I was going in the water or the pole was going overboard. I chose the latter and then realized that someone was going to have to go overboard to get the pole. As we debated on deck about who would jump in, a sweet young guy from the boat next to us, who was already in the water, swam over, picked up our pole and helped get us on the mooring. In return we tossed him a couple of beers! Jeff ended up going in the water anyway to be sure that our bridle was secured properly. 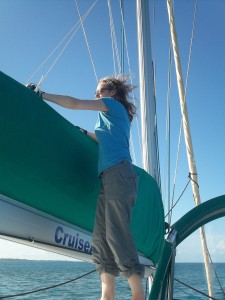 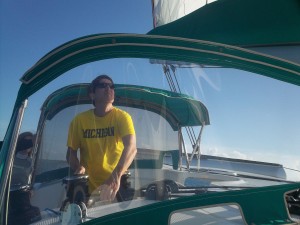 Hauling up the main

As soon as we felt the boat was safe, we hopped in the dingy and zipped over to the public dock, eager to check out Great Guana Cay, which is home to about 150 residents and an internationally known environmental catastrophe, Baker’s Bay Resort. We avoided the resort area, instead making a beeline for Grabber’s, one of two party bars on the island, where we had some tasty food, including a mozzarella and tomato salad, conch fritters, and potato wedges. The atmosphere at Grabbers was very relaxed, with a small bar lined with 20-30 somethings, an in-ground pool with patio seating, bar games including bags and hook, and sand volleyball courts. Situated right on the beach, the location was ideal. I should also mention that the place was teaming with cats, a plus in my book. Cute black and white felines, both kittens and adults, played around the feet of customers, perched on the roof, and frolicked playfully in the sand. Overall, a great place to hang out for a day, kick back with their signature cocktail, available both on the rocks or frozen, and enjoy paradise. 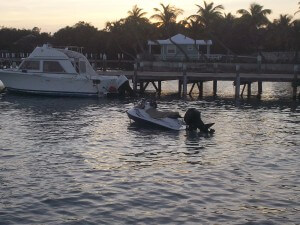 Check out the engine on that bad boy! 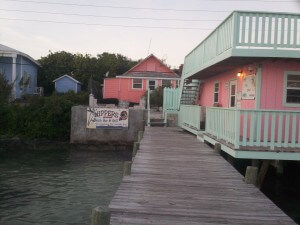 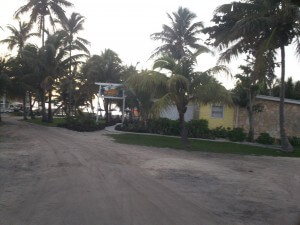 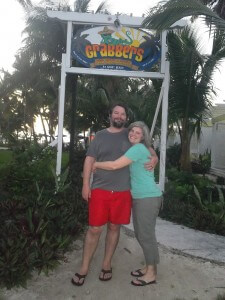 Sasha and David at Grabbers 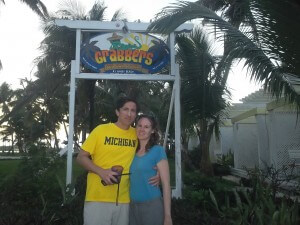 Jeff and Margaret at Grabbers 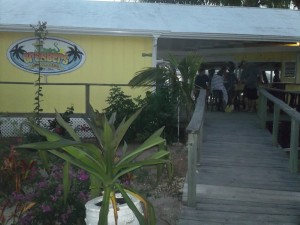 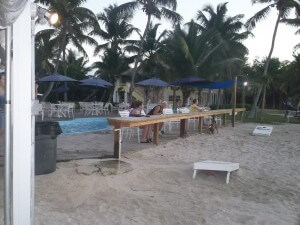 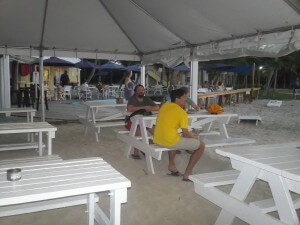 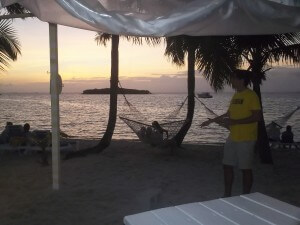 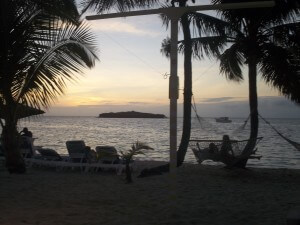 Our next stop was Nippers, which was located on the Atlantic side of the island. If you follow the colorful signs from the docks you will have no trouble finding the sprawling complex, with a three tier patio, two-level pool, indoor dining room, and souvenir shop whose floor is covered in sand. Nippers is a world famous bar, known to cruisers and landlubbers far and wide. They host a weekly pig roast that draws hundreds from around the islands to gather on their beach and party like rockstars. This youtube video will give you an idea of the vibe. This colorfully painted bar was home that evening to an equally colorful cast of characters, though we were driven away by the ravenous mosquitos before we had a chance to trade stories with anyone. The blood suckers were so bad that we did not even have a chance to finish one drink! We laughed on our way out realizing how appropriate the bar name was given our experience. 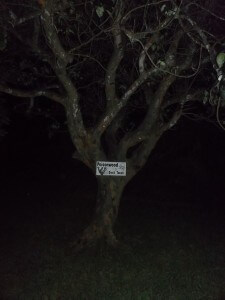 Poisonwood tree on the path to Nippers 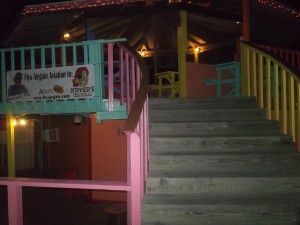 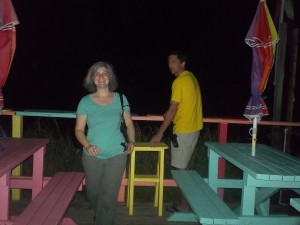 Running away from the mosquitos! 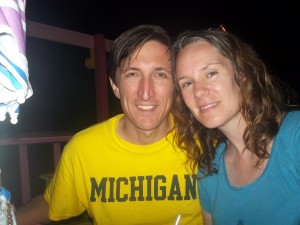 We are not as tipsy as we look! 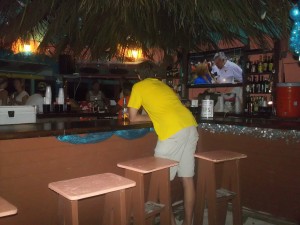 Jeff trying to pay for our drinks so that we can escape the blood suckers! 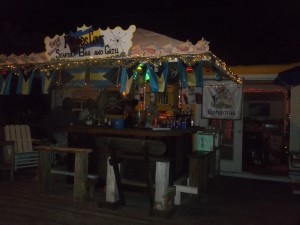 On our walk back to the dingy we stopped at a new roadside beer and sushi hut called Kidd’s Cove Seafood Bar and Grill. The owner, Forrest, and his mom – both very nice people – chatted with me for about 20 minutes about the logistics of starting and running a business in the islands. They were just putting the place together with simple 2×4 bar stools but I am sure their place is going to be a great success. Stop by the next time you visit Guana Cay.