The Go Power! package is great in that it includes the panel itself, the charge controller, and almost everything you will need to hook it up, but we did find that a few things are lacking in the kit. If you are considering purchasing a package from Go Power! or are preparing to install one, you might want to pick up a few things in addition to what is included so that you can best complete the installation.

First, and maybe most importantly for boaters, you will want ring terminals for 8 gauge wire so that you can attach the ends of the leads from the charger securely to the battery. We did not have these, so, at the moment, we just have the wires wrapped and tightened around the battery terminals, which is clearly not the way to go. We will be rectifying that at the first available opportunity, when we get to Cape May. 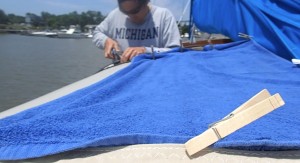 We covered the panel with two towels while we were hooking up the wires, per the instructions.

Also important for boaters installing the panel on a bimini or anyone putting the panel on another non-rigid surface is some form of backing panel. We used quarter-inch corrugated plastic (like in a lawn sign), though you might find something else to better suit your needs. Regardless of what you choose, you should be sure to use something to extend the life of your panel; the promotional material and instructions we saw did not mention the need for backing the panel, but a call to the Go Power! technical support line confirmed that some form of backing was recommended.

Third, you might find that you need more wire than Go Power! includes in the kit. They recommend that the entire run from the panel to the controller and on to the battery be no more than 25’. However, we could find no good place to install the charger closer to the battery, so we ended up with a 27’ run. Consequently, we needed to pick up an extra twenty-four feet of wire (12’ x 2). While the instructions indicated that 10 gauge was the smallest wire one would want to use, Go Power! included eight gauge wire with the package. So, we purchased eight gauge wire to finish off the run and figured we would have less power loss because of it.

Feeding the wires from the controller to the battery.

Fourth, the fuse that Go Power! provides with the kit is installed in the middle of a short ten gauge bit of wire. Since we have eight gauge wire everywhere else in the installation, we want, as we figure most people will as well, eight gauge wire for the fuse, which is installed in the run from the charger to the battery. We will have to procure this somewhere along the way as well, which should not be too difficult.

If you have any problems installing the panel and controller, we highly recommend calling Go Power!’s technical support line. They were extremely helpful when we called.