Energy Needs and Solar Aboard

We have been talking about getting solar for some time. However, we wanted to get comfortable with our energy needs aboard Bear and learn something of her electrical system before we dove into purchasing and installing some charging system that was not right for us. After two years, we were more than ready for some solar, but we were still not sure we knew exactly what our system would be like in the end. So, we decided to start with a simple and relatively inexpensive 80-100 watt package, including panel and charger, and continue to build and configure from there. With Margaret doing most of the research, we settled on a Go Power! GP30 100 watt package, which we picked up from Defender for about 650 dollars (for more about installing this system, see our post here).

I should start off by saying that I know very little about marine electrical stuff. The entire process of installing the solar charger taught us a lot about our electrical system and also pushed our meager skills and knowledge to the very limit. Now, we are enjoying a little more energy aboard and delighting in watching the amps go into the battery on the LCD display. We are also already thinking about how we will expand our charging system and change some of our other gear to better meet our energy needs in the future. 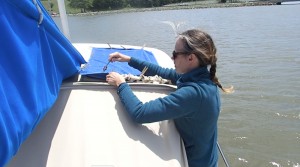 Margaret affixing a towel to the panel to block production while we hook it up.

We now realize that in the future we will want a more functional solar (and possibly wind) charge controller than we have. Our battery setup is a bit odd in that we have two 8D AGM batteries as our house bank. We use the number one battery as our starting battery and, thus, have a battery switch that allows us to run off one or the other battery or both in parallel. Ideally, we would like our controller to charge both batteries at the same time, which is not possible with the controller that comes with the Go Power! system unless we kept the two batteries in parallel all the time, which we find unacceptable. Instead, we wired the controller solely to the number two battery, which we typically (though far from always) isolate and run as the main house battery when we are at anchor, leaving the number one in reserve. With some additional wire, we could hook up our number one to the controller as well, but the controller would only charge that battery when the number one was topped off. 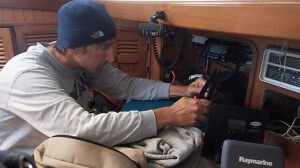 Stripping the wires for the charge controller.

Over the rest of the summer, we will continue to pay attention to both our current energy deficit with the solar charger and the amount of amp hours we would ideally like to have each day aboard Bear. Over the first two days with the solar panel, we have averaged about a 5.2 amp yield from 10am until 3pm and some fraction of that during the rest of the daylight hours. This turns out to somewhere in the neighborhood of 40 amps over the course of a sunny day. However, we have already noticed that the amount varies depending on how much shade the panel sees over the course of the day. For instance, yesterday we had a long period in the heart of the early afternoon where we were only yielding in the low 4s because the boom was partially shading the panel. 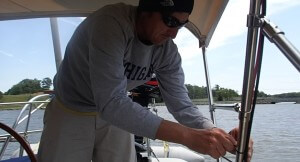 Trying to make the ugly wires as inconspicuous as possible. We will be feeding them through the bimini support in the future.

Going forward, we will definitely want to at least double our energy production at anchor, which could be met simply by adding another panel. However, we will probably increase our energy usage in some ways as we have access to more power. For instance, today Margaret and I went in to shore to use our Dremel for about a hour. Perhaps in the future we would want, need, or expect to do that work using the inverter. On the flip side, our biggest energy draw (an astounding 18 amps!) on the boat, by far, is our Combi-Cold refrigerator. While a new reefer will run us in the neighborhood of 2500 dollars, it will purr along constantly at, on average, maybe two amps. While the cost-benefit analysis suggests we might be better just keeping our current refrigerator and taking the money we would have spent on replacing it to add additional solar or wind, we are both more keen on efficiency rather than generation even if it is more expensive. And, in addition to the refrig, there are still a few more low-hanging energy savings that we can and will make over the next couple months. 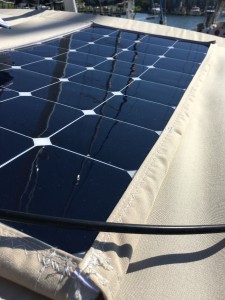 The beautiful new panel, humming along.

In the end, we still have a lot more to learn about how our energy usage will develop as we move towards more full-time cruising. And, we will surely gain more knowledge about both our electrical system and our options for energy savings and energy generation. But you will probably be seeing another solar panel and a new charge controller on Bear sooner rather than later.

9 Responses to Energy Needs and Solar Aboard