Sometimes the best things happen when you get thrown off schedule. Our trip from Baltimore to Annapolis didn’t go quite as planned, but instead, we got to check out an elite anchorage and explore a fairytale-esque island. Some things you just can’t plan.

We woke up in Gibson Harbor to a beautiful sky and lovely weather. Our goal for the morning was to check out Dobbins Island, an island with steep cliffs and wooded paths, which we had passed on our way into this protected anchorage the night before. As we motored through the narrow channel, I read aloud the guidebook description of Dutch Ship Island, as it is referred to by the locals. The north side of the island has a small dock and a long stretch of beach, where we pulled up our dingy.

The mystery of the island revealed itself to us as we hiked through the cut trails to the top most lookout. The south side of the island looks out over the Magothy River from dramatic cliff tops. It was clear from the litter, mostly beer cans, that the island is a favorite hangout, where one could imagine bonfires on the beach and serious star- gazing.

At the east end of the island, which is privately owned, but graciously open to the public, the foundation of a large home is under construction. Jeff and I explored the site and wondered how many stories the house would have to be to see above the treetops. Perhaps in a few years we will sail back and check it out. Surely, by then, this gem will be closed to the public.

Back aboard Bear we set out sights on Annapolis. Vicki hoped to catch the 8pm bus, again, and we were determined not only to get her there, but to also be able to explore the city a bit before she departed. On route we passed by the Sandy Point Shoal Lighthouse and under the Chesapeake Bay Bridge. 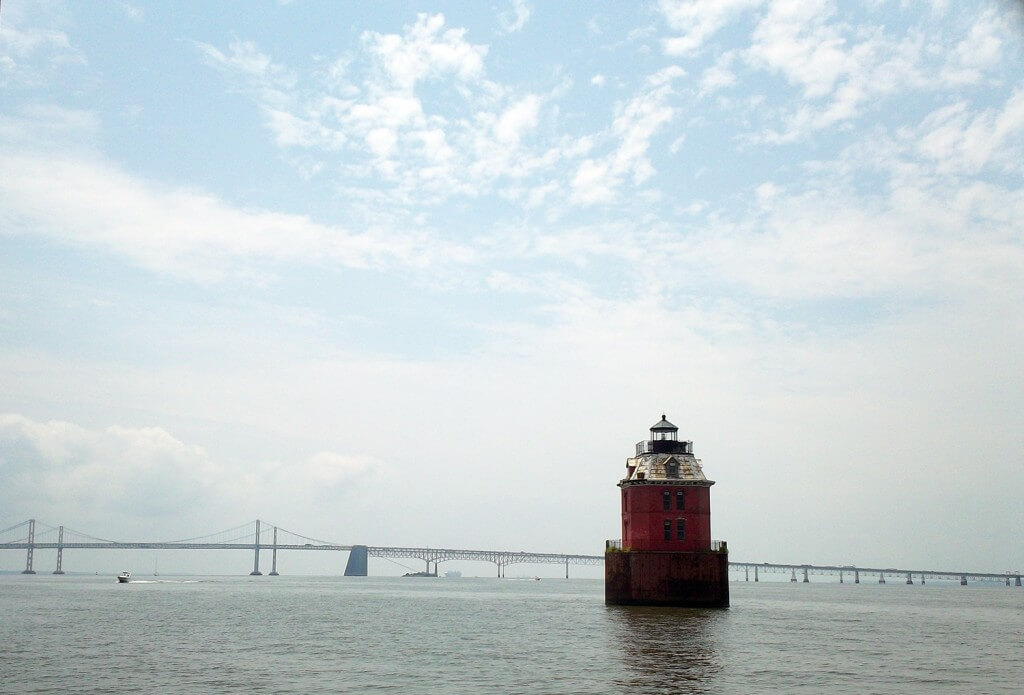 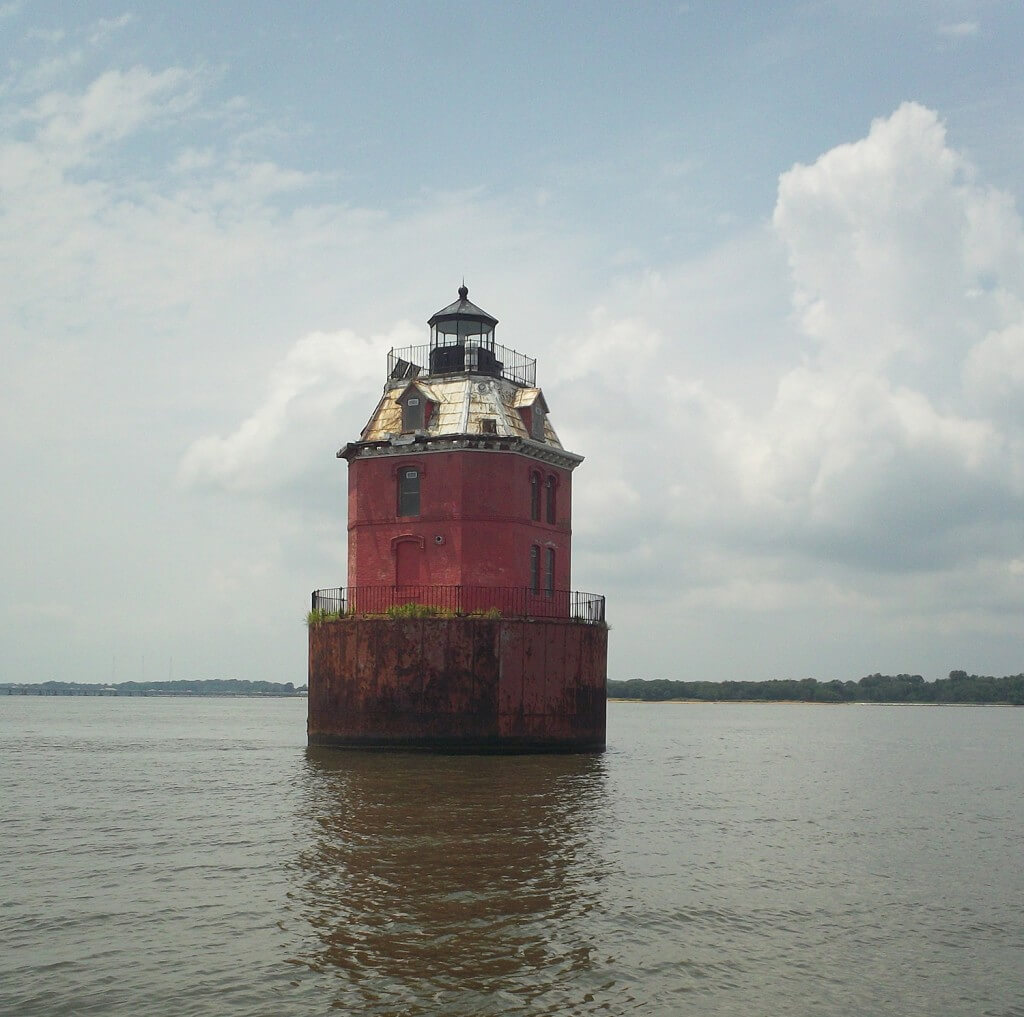 As we came into the Severn, we were dazzled by the number of sailboats out on the water. Numerous sailing classes were being taught to kids as young as 6 or 7, making our approach to the mooring field a bit circuitous. 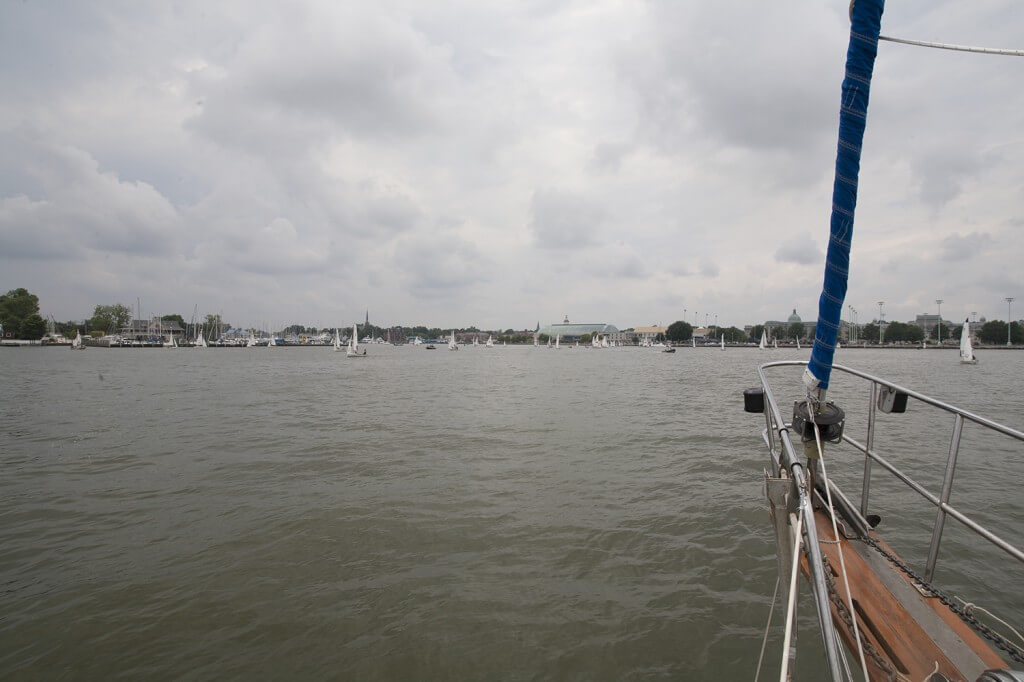 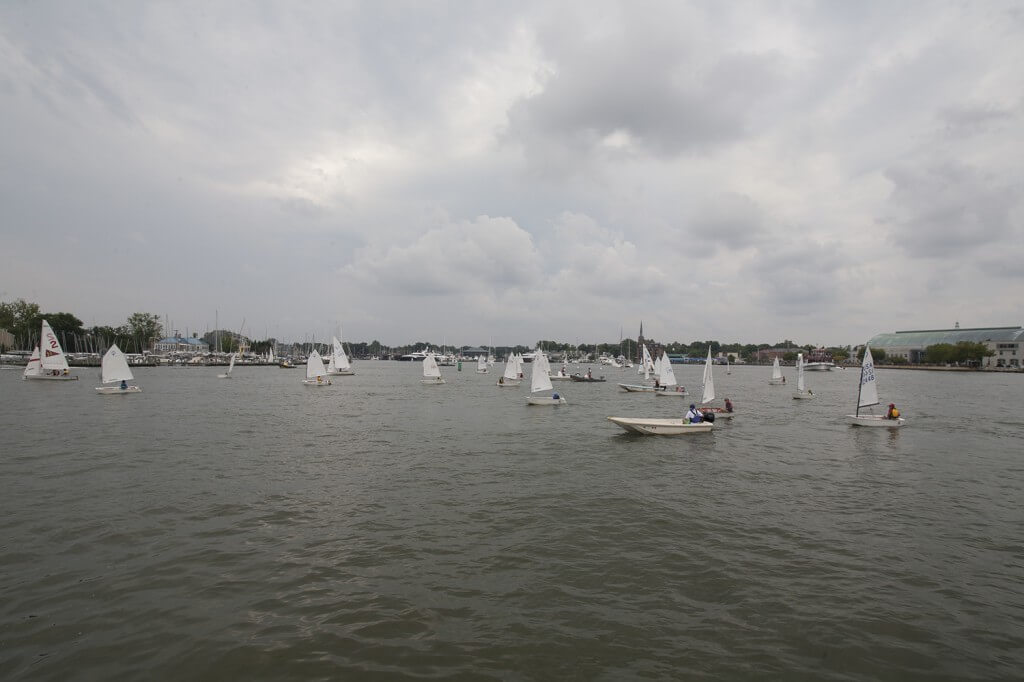 After a quick pass through the field, we decided that we would pick up either mooring 28 or 29, depending on if we missed on our first attempt. With Jeff as the bow and me at the helm, we came upon the first ball a bit fast and Jeff attempted to hang on to the line, to no avail. We learned a good lesson here though. In his attempt to stop the forward motion of Bear, a 24000 lb. vessel, he severely hurt his ring finger on his left hand. Though we successfully picked up the next ball and breathed a sigh of relieve at our arrival, Jeff was not able to enjoy the moment, instead leaping down the companionway stairs in an effort to find a lubricant to help him remove his wedding band before his finger swelled. It was a good choice, as his finger ballooned to twice its normal size in a matter of minutes.

After all of the commotion with the mooring, we called over the harbormaster to pay for our stay and ask some advice about getting Vicki to the bus station. Sadly, he told us that he did not even know that Greyhound had a station in Annapolis. He did encourage us to stop by the visitor center, where surely, someone would know how to locate The Dog.

Our next line of business was a pump out, followed by showers at the harbormasters office. I cannot explain to you how fabulous a shower feels after a few days of working hard aboard a boat in the heat of the summer. There were smiles all around and a unanimous desire to get an adult beverage.

We rewarded ourselves with Painkillers at Pusser’s, a bar with its roots in the British Virgin Islands. This lovely concoction consists of Pusser’s Rum, coconut milk, a variety of fruit juices, and a dash of nutmeg on top. On the menu it comes in varying strengths, from a 2 to a 4. Vicki and I got 2’s and Jeff got a 4, perhaps to help ease the pain of his finger. We toasted to a successful day at sea, and shared our favorite sailors toast with Vicki: To The Wind That Blows, The Ship That Goes, And The Last Who Loves A Sailor. 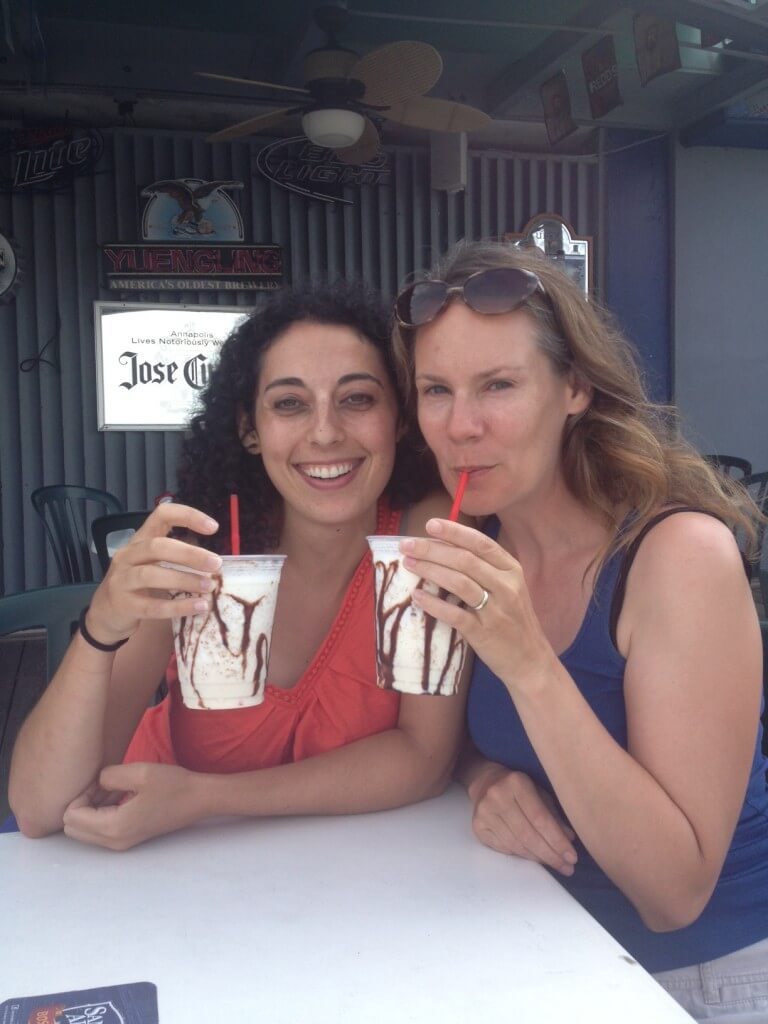 Time passed quickly as we enjoyed another couple of rounds and finished off a card game from the night before. With just an hour left before Vicki would need to catch the bus, we explored the streets of Annapolis, peering in the tourist haunts and ice cream shops. At Church Circle we found a nice navy cadet, who despite his love of the Buckeyes, helped us read the bus route signs and direct us to what ultimately turned out to be Vicki’s ticket out of town.

As the bus pulled away, we waved farewell, with hopes to have Vicki aboard again someday soon. Hand in hand, Jeff and I doubled back to find one of the ice cream shops that I had coveted earlier. Ice cream, as I am sure many of you know, makes everything better.