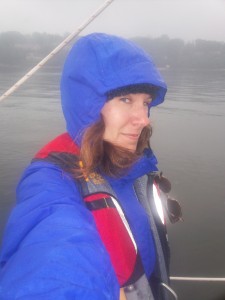 After trying to set the anchor five times, we picked up our first mooring ball of the trip, at the Hempstead Harbor Club. Our very dirty decks after trying to set the anchor five times!

For $45 a night, you get a secure mooring, launch service until 9:30 p.m., and access to their clubhouse and showers. Yes, that last word is the icing on the cake. Shower! Feeling exhausted from the fight with the anchor, and the stress of the fog, we decided to hunker down for the night on the boat, and grab the launch in the morning, for a shower and a chance to do a little sight seeing. 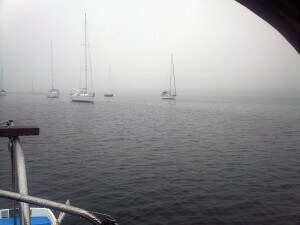 Fog in the morning at Glen Cove

In the morning, with the harbor still blanketed in fog, we went to shore where we took some rather mediocre showers and went on a long walk into town. 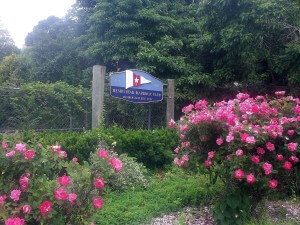 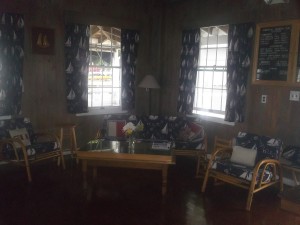 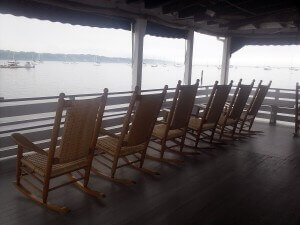 Front porch of the clubhouse, looking out over the harbor

On the roughly 2 mile walk to town we passed a few marinas, a peculiar wooden ship replica, and a beat down industrial area in the midst of a major reclamation project. Jeff on the fake boat replica The town of Glen Cove is home to a smattering of awesome-looking ethnic restaurants, including a few Peruvian pizza shops! We meandered along, rather aimlessly, until we felt we had reached the pinnacle store in town – the Lamborghini dealership! Unimpressed, we sauntered back to Bear, where the fog had begun to clear, allowing us to set sail for points west. We dropped the hook a few hours later between two yacht clubs in the busy Port Washington harbor. Having been sidetracked by the weather the previous day, we were eager to check out the town, do some laundry, and reprovision. On the first day of our stay, we packed the dingy to the brim with laundry and rowed over to the town dock to “park” for the day. The nearest Laundromat was 1.8 miles away. Crossfit-style, we carried our three large bags of laundry, two computers, and our wary bodies through the quaint downtown, which was teeming with aggressive and impatient drivers. Once we arrived at the Laundromat we were confronted with the usual dilemma – sit and watch the suds go ‘round, or venture out in search of wifi to get some work done.

We choose the later but were sorely disappointed to find no convenient coffee shops in the area. Instead, we devised a plan for Jeff to go and get the dingy and bring it to a closer city dock, while I began the reprovisioning at the local Stop and Shop.

I made a quick detour into the Home Goods store, as we need some throw pillows and blankets to make the salon more comfortable, but I have been slow to buy these things as I know that I will be recovering all of the cushions, thus changing the color scheme of the boat. The cushions are currently a deep red hue that I plan to replace with something lighter. However, I don’t want to buy anything that matches the current décor as it most likely will not match the renovations. Serious problem, I know.

After a rather epic trip to the grocer, Jeff and I toted the bags across the street to the dingy, and, while I waited at the dock, protecting our grub, Jeff ran across town to pick up our laundry. It is days like this that feel like work. But, at least it’s an adventure. Jeff checking on the dingy as we leave the dock

The next morning, we rowed in again, and spent the better part of the day at the Dolphin Bookstore and Cafe. They had a great selection of children’s toys, books, gifts, and games. The cofffeeshop offered plenty of gluten-free goodies, including paninis, blondies, and brownies. Our “desk” at the Dolphin Bookstore and Cafe Post-work walk around the duck pond

But our true adventure for the day came when Jeff accidentally dropped our oar paddles overboard when climbing back into the dingy. I managed to grab one, but the other one sank to the bottom of the harbor. It sank! Who makes our paddles that sink! 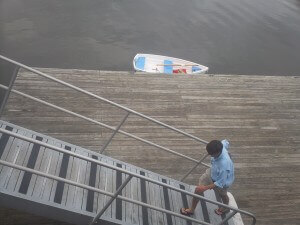 Retreating from the site of the lost paddle

Jeff felt bad about this, but there wasn’t much to do except try to figure out a solution. We could not possibly row with one oar, canoe-style, out to Bear. She was anchored too far away and a storm was blowing into the harbor. We called West Marine, thinking we could get a spare, but much to our surprise, they had closed at 5 p.m.. On a Friday!

As we walked around looking for other options, we came across a fishing store that rented kayaks. Lying in the corner, a bit dusty, was a broken paddle. We offered to buy it, seeing it as a last resort. The owner took pity on us and told us we could borrow it until the morning.

As we considered the logistics of rowing back in building winds, we decided to call the launch services and see if they would tow our dingy back out to our boat. To our delight, they picked up our cub, propped her on the bow, and zipped us out to Bear just before the skies opened. Best $20 we spent that day!

2 Responses to Detoured! Pesky Fog and other Shenanigans!