Chesapeake City to the Sassafras

Our original plan was to leave Chesapeake City sometime in the early afternoon so that we could make it down to the Sassafras River. However, we decided to watch the US v. Belgium World Cup game in the afternoon instead. By the time the game was over, it was six in the evening. At that point, our options were to either stay another night in Chesapeake City or make our way to the Sassafras, knowing we would arrive in the dark. 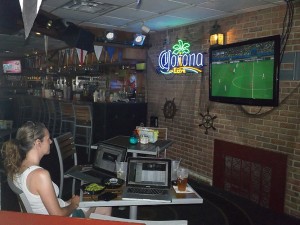 Watching the US lose in the World Cup.

I had been by the place we intended to anchor, just south of Ordinary Point, during my Chesapeake trip three years previous aboard my Catalina 22. Consequently, I was familiar with the area and was fairly certain we would have no difficulties coming in without light. And, though there is nothing wrong with Chesapeake City, we did want to see something new and get a head start on finding a place to hole up for the week of July Fourth. So, we pulled up anchor and were underway by 7. 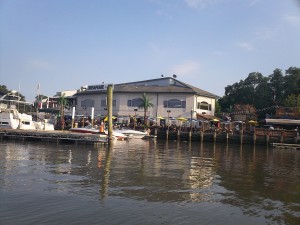 Heading out of Chesapeake CIty – kissing the bottom with the keel as we left.

Of course, by the time we left, the current in the upper Chesapeake was working against us and there was no wind to speak of to speed our trip south. Still, we continued under power making a little over five knots. With some calculating, we realized we would not make it in until after 11pm. But nothing could dampen our mood as we finally cruised down Chesapeake Bay, something that had been a goal for the past month and a half. 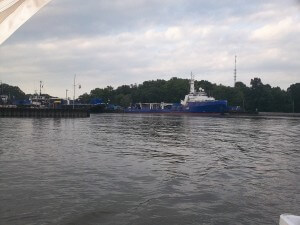 Pilot boats along the C&D.

As night descended upon us, we stayed just to the left of the channel, keeping out of the way of any commercial traffic that might be transiting the area, headed for the C&D Canal. No shipping passed us, but a few other recreational boats, including one Sea Ray towing another boat, neither of which had any lights on, seemed to have the same idea as us, and we had to dodge these north-bounders. We avoided any collisions, and, before too long, were out there all by ourselves, enjoying the challenge of picking up buoys and otherwise navigating in the darkness. 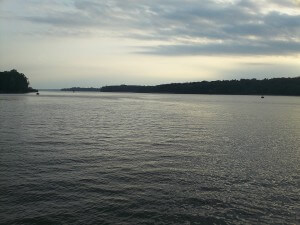 As we passed out of the C&D Canal and into the Chesapeake Bay officially.

At Grove Point, we finally made the left turn into the Sassafras, staying more than far enough off the tip to avoid the shallower water. With Margaret on the bow with the spotlight looking for crab traps and other obstacles, I set the autopilot on a direct course for the red “2” buoy that marked the bend in the river around Ordinary Point. It would be the only aid to navigation for the next five miles. The night enveloped us even more as we could see only a few lights along the shore and the many stars above.

As we slowly traversed the lower Sassafras, we both stood on the bow, chatting, looking around, and just hanging out arm in arm, once again happy that the autopilot was humming away. It was a magic hour. But, soon enough, we put the spotlight on the buoy and aimed for the mouth of Turner Creek, another three-quarters of a mile down the river, where we intended to anchor. As we got closer, I could see an anchor light set off from the few house lights on land, giving me something easy to aim for. 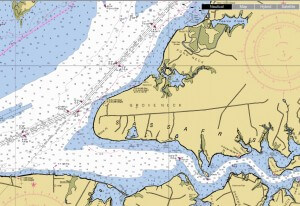 When we were within a few hundred yards of the anchored boat – what turned out to be a catamaran – we dropped the hook. Backing down on the anchor and checking we were not moving by GPS, since it was hard to line up anything on the shoreline in the dark, we successfully completed our first inland night voyage on Bear. For me, this felt like an accomplishment on par with our Sandy Hook to Cape May trip; it certainly built our confidence in our navigation skills, teamwork, and ability to handle Bear.