Since returning to Peoria, a few people have asked me what the best part of our summer aboard Bear was. I have given a variety of answers and hemmed and hawed a few times, as there were so many great experiences. But I would not equivocate if someone asked me (and I am not sure why they have not) what was the best bar we went to. That would be Backstreet Pub in Beaufort, North Carolina.

On a sort of alley just a half block from the waterfront, Backstreet Pub is one of the few great sailors’ bars on the ICW between Norfolk and the Florida line, and the only one that I would say is not to be missed. Passing yachtsmen have left burgees and life rings with their vessel’s name, conversation often turns to yarns about the water, and there is an unmistakable salty feel about the place. 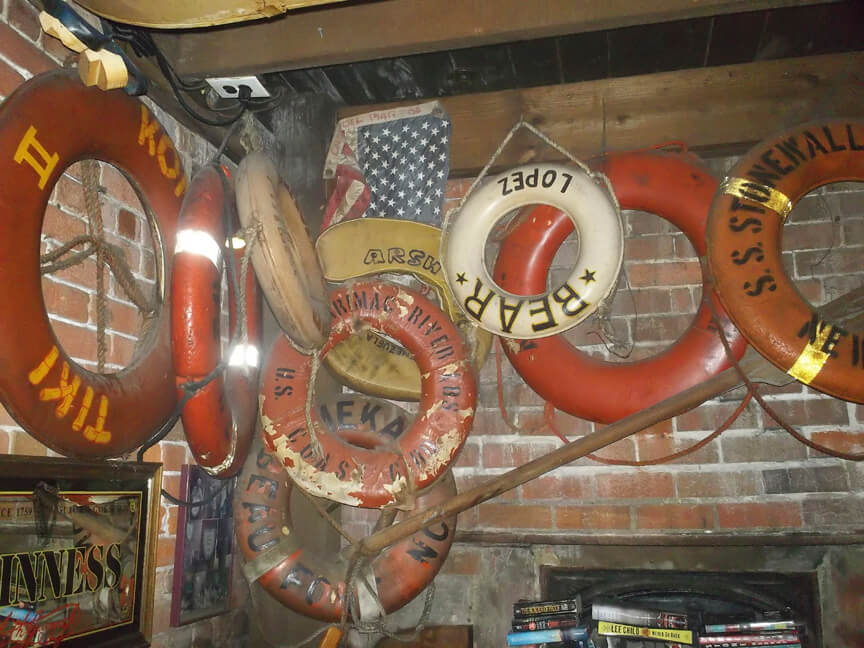 Life rings hanging at Backstreet Pub. The Bear one is not ours!

But Backstreet Pub is clearly more than a watering hole for those passing through on boats. It is also a serious locals’ hangout. Folks stop by on their way home from work, and some, by the level of their midday intoxication, seem to have skipped their job altogether so they can hang out on the patio in the sun. Dogs lounge about and have no qualms about coming behind the bar, where a stockpile of bones is waiting. Gossip flows readily, and everyone seems to know and genuinely care about each other. 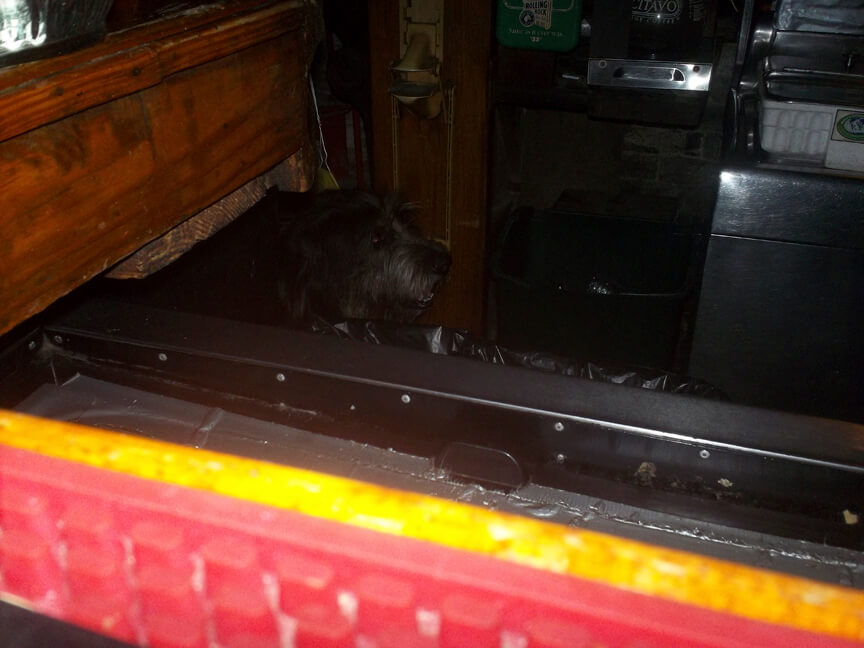 Pooch sneaking underneath the bar to get a bone

When Tim and I first came ashore, we made it our first stop and instantly struck up a conversation with the bartender and father and son sitting at the bar. The bartender was entertaining us with stories of working a memorable, and final, two weeks offshore aboard a dredger. She could spin a tale, but she instantly gave the floor to the son, who was around 40, when it became clear that this was his first stop back in the States after traveling across Asia, including to Tibet, with a family of four and a film crew over the past year. While a bit reticent, he shared a few of his experiences with us. Characters with interesting stories can make a bar, and we quickly found that this place had them in spades.

While Tim went outside to smoke a cigar, and promptly met half the town, I stayed inside, made friends with a few of the dogs and barflies, and studied the beer selection, which was the best we had seen since at least Norfolk. A die-hard Bass Ale fan, Tim was happy to see they had it on tap. But Backstreet’s cast of beers went far beyond premium macrobrews with a host of North Carolina and out-of-state craft offerings on tap and in bottles. What’s more, the beers were reasonably priced, and they always seemed to have something on special. Over the couple days we were there, I worked my way through the IPAs and then moved into the porters and stouts. 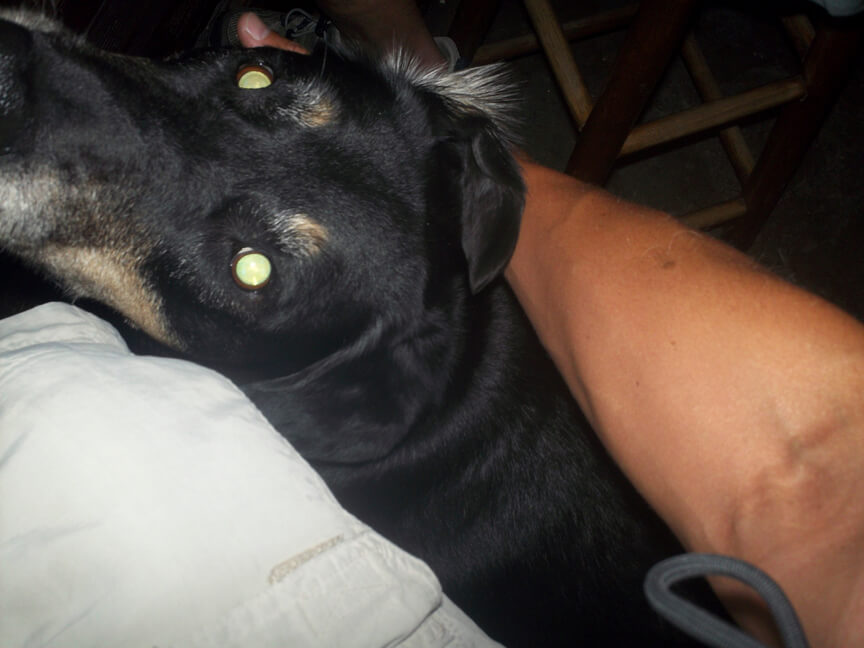 One of my new Backstreet friends

One of the bartenders made it a point to always have free snacks on hand for her customers. But when we really got hungry, she pulled out a host of menus from most of the nearby restaurants. Tim and I ended up ordering some sandwiches from the Royal James Café, just down the alley from Backstreet. We even picked up dinner for the bartender, which she appreciatively answered with a round of beer. Later, I saw someone out on the patio with a few hors devours from home, and another person ordered a pizza at one point.

To top it all off, the bar regularly has live music, typically bluegrass, folk, classic rock, and funky jam bands of various sorts. Often, the bands setup in the loft, which helps keep the crowd spread out, but does little for the noise. Fortunately, the patio – and the alley – provides a refuge from both the crush of patrons and an overly amplified band while still allowing one to enjoy the music, brews, and camaraderie. On Wednesday nights, Backstreet Pub has a regular hoot, welcoming musicians from the local area and, when we were there, as far away as New Bern. There were 8-10 people playing acoustic guitar, banjo, mandolin, fiddle, and various percussion instruments, rocking some covers and a few originals, watching each other for the key changes and timing, and respectfully allowing everyone to get a chance to really jam. 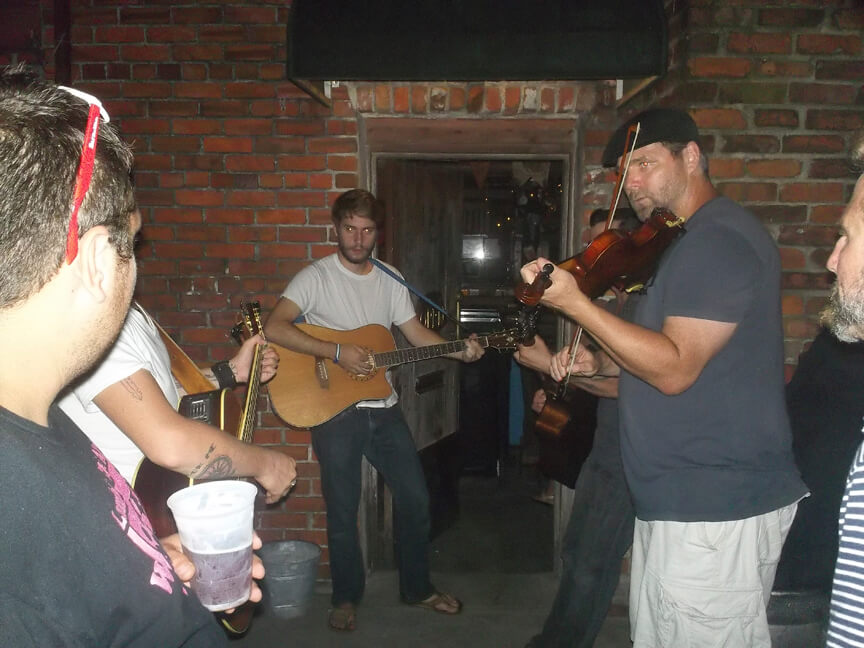 Just writing this review makes me want to head back to Beaufort for a couple more days, if only to spend some more time at Backstreet Pub. But there really is no doubt we will be back with the town’s nice anchorage and dinghy dock and location right off the ICW and just off one of the best inlets on the coast.

One Response to Best Bar of the Intracoastal Waterway, Summer 2014