Anchoring Aboard Bear: Our Rocna and a Nasty Squall

The instructions included with the Rocna say that you need to be careful when using it because the anchor can set so quickly that unsuspecting crew might be jolted. Margaret and I had a good laugh at that one while still on the mooring in Annapolis. Then we headed across Chesapeake Bay to St. Michaels, anchoring with the Rocna for the first time in the narrow confines of Fogg Cove. Choosing a tight spot between a channel marker, another anchored boat, and the docks of the Chesapeake Bay Maritime Museum, we dropped the hook and, while idling backwards, felt ourselves come to a sudden stop. The experience was not dramatic enough to pull us off our feet or really even justify the warning in the instructions, but it was noticeable compared to the slow drag and set that we were used to with the Bruce. 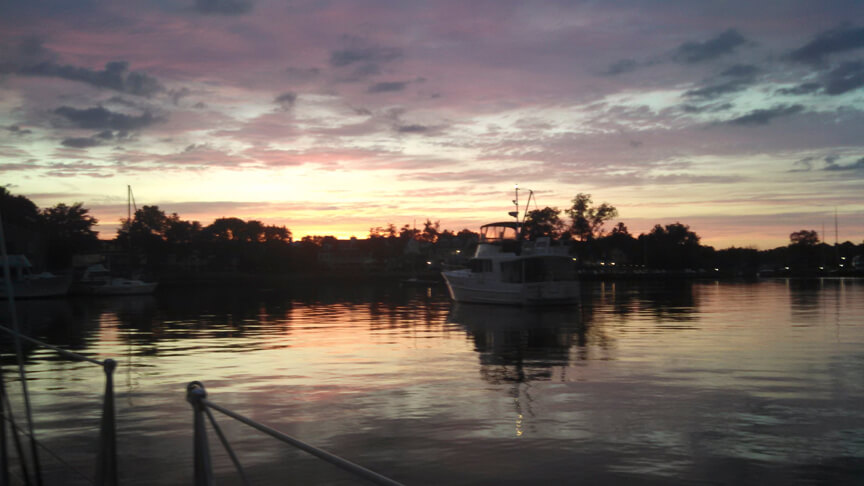 Our first night at anchor with the Rocna in Fogg Cove, St. Michaels, MD

Over the coming weeks, we became more and more enamored with the Rocna. The new anchor continued to set on the first try every time except once, off Tangier Island. After a few sets, Margaret stopped hesitating to back down on the anchor at 2600 rpm, no longer fearing it would pull out. Slowly, I began to trust the anchor more, sleeping more soundly and worrying less when we were ashore for a few hours. As we moved further south and started encountering the strong tidal currents of the Carolinas and Georgia, I became even more pleased with our purchase. Through high winds, storms, and countless tide changes, we never dragged our anchor or even seemed to reset it when winds or current suddenly reversed us. Instead, it just seemed like the anchor continued to stay buried, pivoting instead of popping out and digging in again. 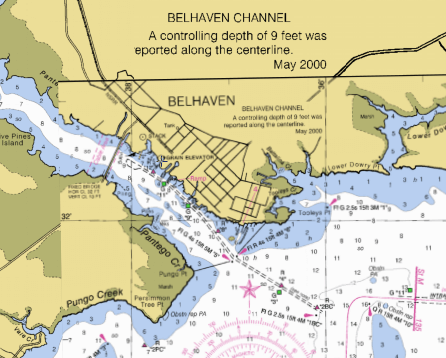 The biggest test for the Rocna came a few days south of Norfolk, when Tim and I anchored up off Belhaven, North Carolina. We set the hook in Pantego Creek, above the town and about two hundred yards from the bridge. The radar showed some nasty thunderstorms in the area, so we stayed aboard waiting for them to pass through. Shortly after I put on our bridle anchor snubber, the southwestern horizon began to darken. As the storm approached, cloud-to-ground lightning and roiling clouds in all shades of black and grey charged towards us. We battened down the hatches and hoped it would pass to the east of us, which actually looked like a distinct possibility. But the rain began to pelt us, and we knew we were in for at least some excitement. Originally, we stayed in the cockpit, remaining relatively dry under the bimini and dodger as the rain and wind lashed us. But within fifteen minutes, the wind had picked up significantly and started to slash at us from multiple directions, driving the rain under the canopy and causing us to dash below, closing the companionway behind us. 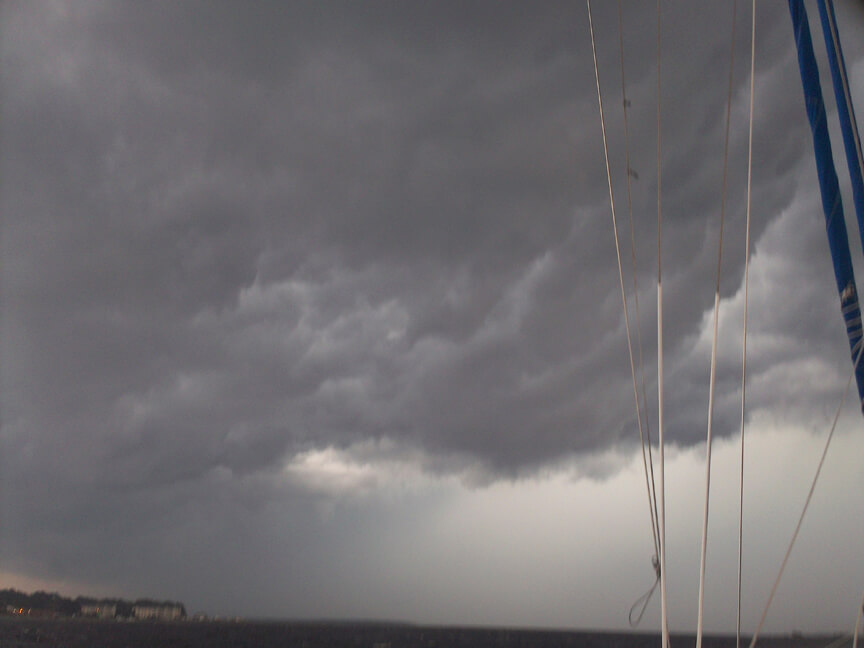 The storm then kicked up a few notches more. While we held on, the wind whipped the boat in every direction, and we completed at least one full circle around the anchor. As we gripped the handholds, the boat violently rocked and, occasionally, kept us heeled to one side or the other. At one point, Tim, a relative newcomer to sailboats even yelled, with more concern than terror in his voice, across the cabin to me, “I think we are going over.” At that point, we were probably only heeled at about 15 or 20 degrees, but Tim’s concern reflected just how vicious the squall was. Each time it seemed like the storm must have given us all it had, the wind and rain notched up a bit more. During one of these upticks in intensity, after just having been spun around like a child blindfolded before the piñata, the rain and wind combined to destroy all visibility. The lights of the bridge and any outline of shore we had been able to make out, however intermittently, were now no longer visible at all. Unable to see anything and buffeted by the winds, I grabbed the keys and pulled open the companionway, thinking we were surely dragging, probably right down on the bridge. Getting soaked at the top of the stairs, I hesitated for a moment trying to glimpse anything through the torrent. After a moment or two, the lights of the bridge weakly appeared off our stern as the rain and wind meagerly. Ten minutes later, the storm had finally subsided after thirty minutes of real fury. As we looked around in the peaceful rain of the aftermath, we were shocked and relieved to see we were in the exact same spot, though the buoy that was tied to our anchor trip line was nowhere to be seen. 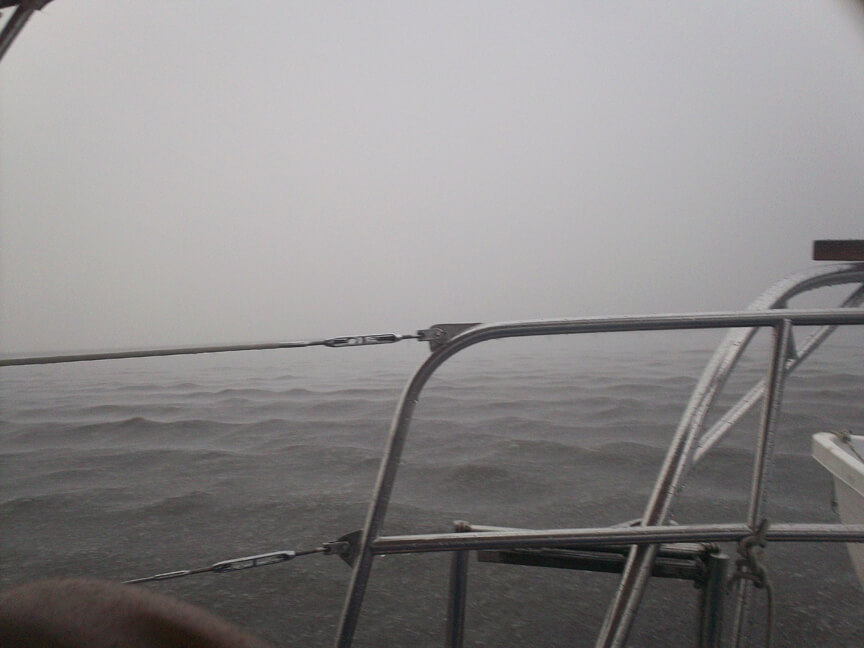 Not the worst of it (I was not idly taking pics then), but still pretty low visibility

As we sat in the cockpit and waited for the last of the rain to move off, we heard weather warnings for the Pamlico Sound, just a few miles to the south and east of us. On the VHF, the National Weather Service was alerting boaters of storms packing 65 knot winds and spawning waterspouts. Later, ashore, we ran into a couple who had come in to the Belhaven town docks in a trawler just as the storm hit. We swapped stories with them and heard that the parking lot just off the hospital – a few hundred yards from where we were at anchor – had sustained a direct lightening strike, knocking out power to part of the town. Back aboard in the evening, another storm, coming from the same direction as the first, brought massive lightening displays, including a strange hissing accompanying some of the flashes, but we fortunately escaped the brunt of that one.

While I have road out a couple comparable storms at anchor, I have never experienced the constant, intense and circling wind shifts that we did at Belhaven. And though we will never know whether Bear would have held to the Bruce, I was thankful we were secured by the Rocna. My confidence in the anchor increased even more the following morning when we raised it to get underway. As the last ten feet of chain came aboard, so did our trip line and buoy, wrapped multiple times around the rode, attesting to the intensity and confusion of the previous afternoon’s storm. 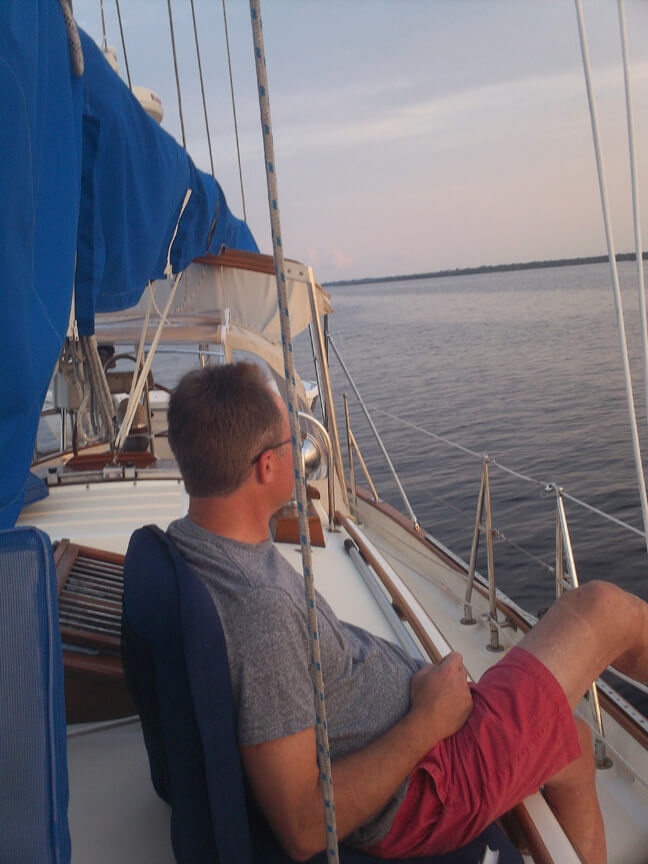 Reading the cruising forums and sailing blogs, it becomes clear that a large proportion of the people who try a new generation anchor could never imagine going back to their older CQRs or Bruces. Without a doubt, I am in that category. And, if you are at all considering a new generation anchor, I encourage you to make the purchase now; you will not be disappointed.

2 Responses to Anchoring Aboard Bear: Our Rocna and a Nasty Squall