By the time we took a mooring buoy on Spa Creek in Annapolis, Margaret and I had decided we would be buying a new generation anchor sooner rather than later. While the Bruce that came with the boat was adequate, we hoped that a different anchor would set easier and put our minds even more at ease. The one thing that made us hesitate on the purchase, besides the price, was the sheer number of designs out there. Unable to just pick up a couple different models from the store – not too many places stock anchors in various sizes, especially of more than one new generation style, plus we did not have a car – figuring out what type would fit on our bow roller was a bit daunting. But settling on an anchor and making a plan to purchase it was high on our very long list of boat repairs and upgrades to accomplish in Annapolis.

Unlike the claw or plow style anchors, the new generation anchors are meant to dig into the ground rather than grab or furrow some portion of the bottom. The Bügel, patented in 1986, and the Spade, introduced in 1996, are the two anchors that really began the revolution in design, and all the new generation anchors owe a great deal to both of these. There are probably dozens of different new generation anchor designs out there, but here in the states, Margaret and I were basically choosing between the Spade, Rocna, Manson Supreme, and Mantus anchors, just because that is what is readily available. 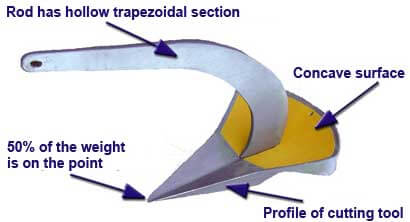 The Spade is the most streamlined design of the four and would probably fit on our roller without a problem. Probably because it can be accommodated on most boats, most West Marine stores stock a full complement of the Spade. However, I had picked up the impression by skimming countless anchoring debates on CruisersForum, reading articles in the sailing magazines and online, and having a very helpful conversation with the anchoring guru at the Defender outlet store in Connecticut that the Spade, although an excellent anchor, was marginally more likely to drag than the other designs available. 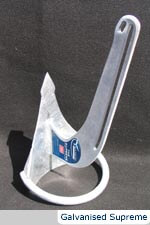 The Rocna, Manson, and Mantus all look quite similar with a large concave fluke and a roll bar to help the anchor orient itself correctly when setting. However, this same roll bar raised the possibility that it would not fit on our bow. In the end, though, the shape and size of the fluke was actually the thing that caused the most problems in fitting one of these anchors on our Tayana 37. With little difference between the designs and general agreement in the sailing community – at least as much agreement as you can get on an anchoring topic – that they were all equally effective, the decision between the three came down to price, availability, and fit.

For the size we were looking at – a 55 lb. Rocna, 65 lb. Mantus, and 60 lb. Manson Supreme – the Mantus and Rocna were comparably priced at around 600 dollars while the Manson could be had for about 150 more. Between the price and the fact that the Manson did not offer a template, allowing us to make sure the anchor fit before we bought it, while the other two did, it was easy to eliminate the Manson Supreme. When a quick phone call over to the Annapolis West Marine confirmed that they had the Rocna we wanted in stock, our focus narrowed even more. We did, however, feel a little remorse about moving away from the Mantus because the company is very supportive of the cruising community, often giving away anchors as promotions and reaching out to bloggers that we respect with free swag. Of course, we did not feel too bad considering Mantus had not offered us a free anchor!

To make certain the Rocna would fit, I asked my folks to print out the template and bring it with them when they visited us in Annapolis. One afternoon shortly after they left town, I put the template together and tested it on the roller where it seemed to fit without any issues. Now, besides commandeering a car to pick up the anchor at West, all we had to do was convince ourselves that we really should go ahead and pull the trigger on this purchase. 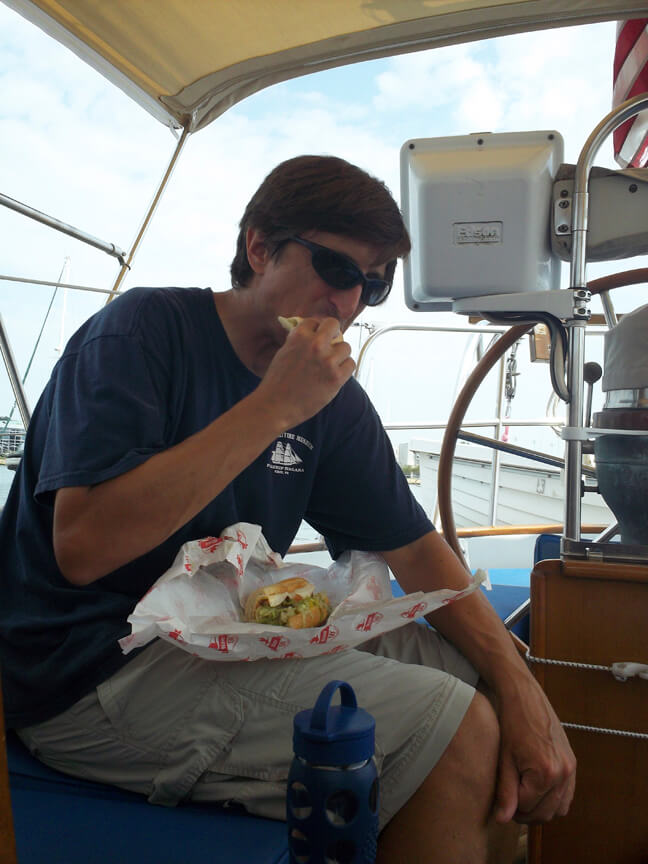 A day or two later, our friends Shawn and Brian were the first to roll into town for our summer party. Leaving them to settle in at the house, Margaret and I immediately took off in their minivan to get groceries and alcohol for the weekend. I dropped Margaret off at the supermarket and brought up directions to what looked like a very large liquor store. When I pulled into the parking lot, I realized that I had, conveniently and completely unintendedly, arrived right next to the West Marine. After stocking up on boxed wine, craft beer, and lots of liquor, including a bottle of Pyrat Rum for only 20 bucks, I headed next door and purchased the Rocna. 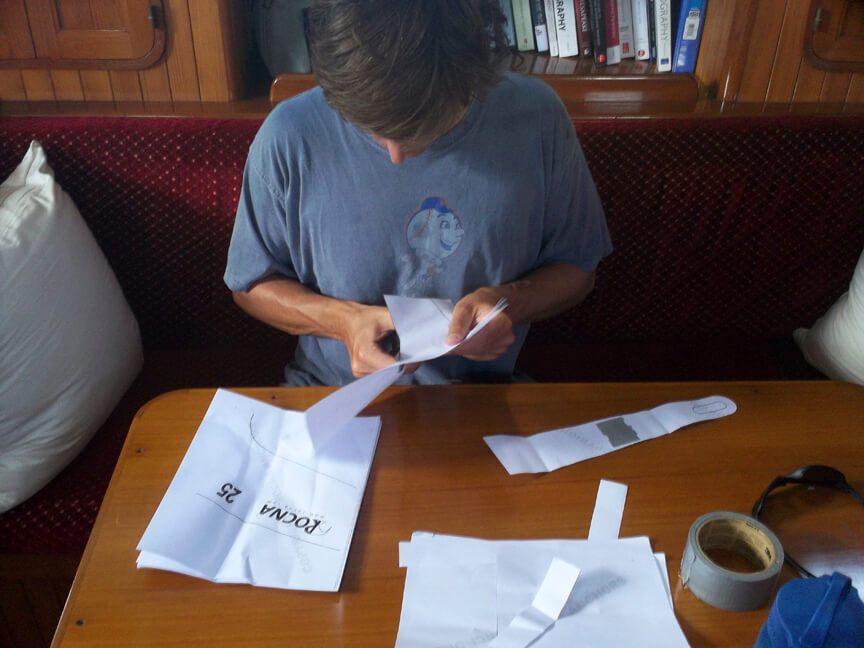 Putting together the template

Following the crazy party weekend, I put the anchor on the bow roller with the help of Jason, another friend in town for the party. It fit well, but the left side of the fluke rested against our bow sprit, causing us some consternation. But after a little discussion amongst the crew, we decided the anchor was fine, which proved to be the case as we made our way another thousand miles south to Georgia. 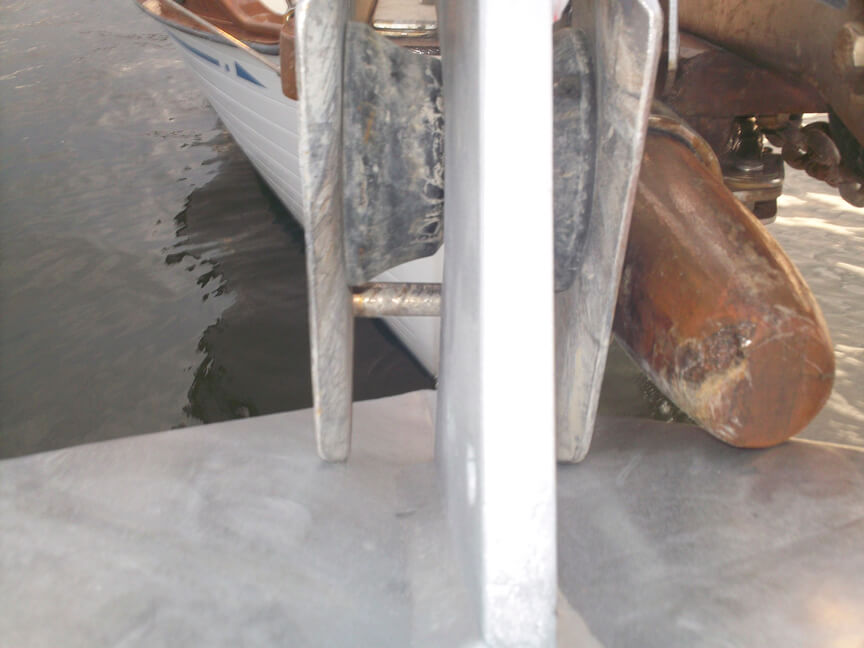 The Rocna on Bear, resting against the bow sprit 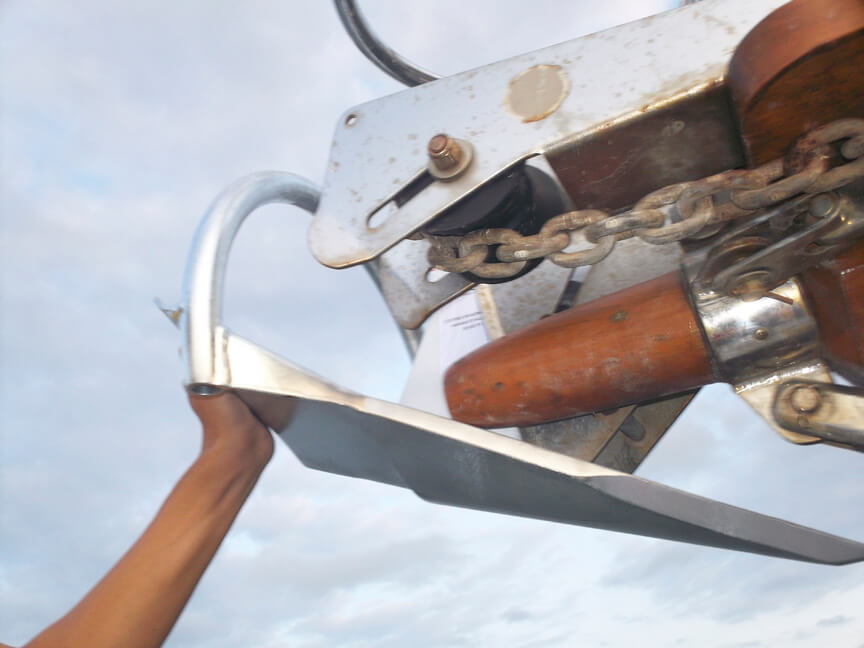 Another shot of the Rocna against the bow sprit

Next time, I will discuss our experiences with the Rocna, including an epic storm Tim and I rode out at anchor off Belhaven, North Carolina. I also plan to post about our anchoring routine and technique as well as describing the anchor snubbers that we use. If you missed the first post in our anchor series, you can check it out here.

2 Responses to Anchoring Aboard Bear: Choosing a New Generation Anchor