All Work and Some Play

It has been a busy few days here on Bear. We had some mechanical issues that needed to be addresses and a lot of work to do ashore at the library, where we are able to get free wifi. 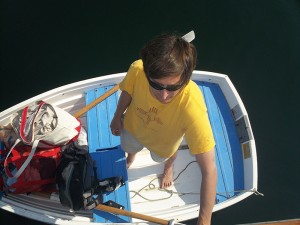 Packing the dingy to head ashore 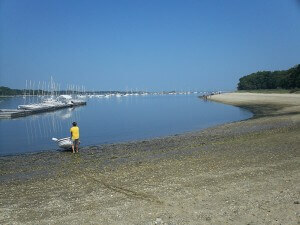 Jeff pulling the dingy ashore – you can tell by the lines in the sand we have been here a few times before! 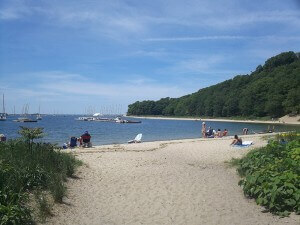 The dog/dingy beach busy with sun bathers and dog walkers 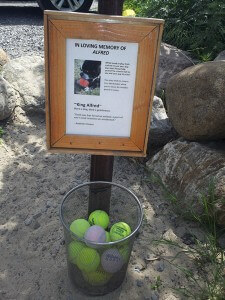 The most fabulous memorial to a pet we have ever seen!

Jeff and I are both teaching online classes this summer to supplement the cruising kitty. While we have had numerous challenges with the boat since the shakedown cruise, we have also had quite a few successes!

When were arrived in Port Jefferson on Friday our faucets were not running properly. Rather than streaming water, they were spitting at us. A quick peek at the water pump showed us that the diaphragm was torn and was allowing water to spray out of the pump. More on our adventure to get a new pump here . On Sunday, we decided to tackle the removal of the old, and installation of the new, pump. 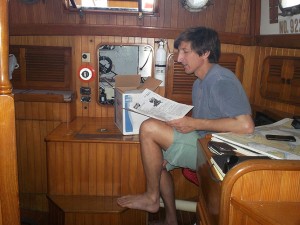 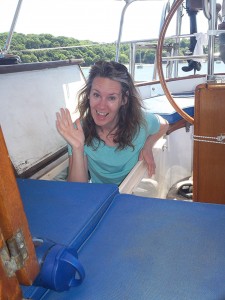 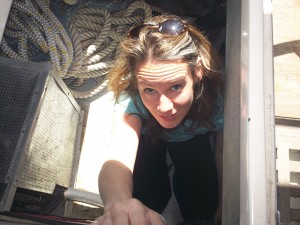 I climbed down into the lazarette to check on the hoses while Jeff removed the screws. 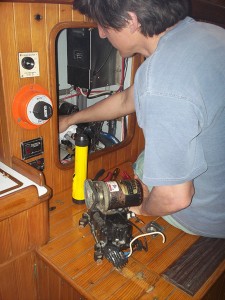 Within a couple of minutes we had the new unit in place. 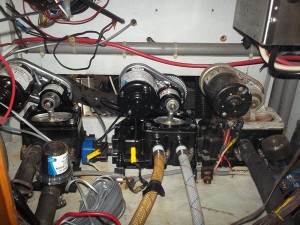 Unfortunately, our faucets were still spitting water, but we could hear a hissing noise coming from the new pump. In a last ditch effort, we removed the hoses, and reconnected them, this time tighting the o-clamps as tight as possible. With our fingers crossed, we turned on the faucets. Voila! Glorious streams of water, flowing freely. Success #1

We had another problem with the head! On our second morning in Port Jefferson the handle of our new manual head would not stay depressed. We concluded that our waste tank must be full. Though we had not yet lived aboard for a full week, the previous owners had her hauled in a hurry and probably did not have time to do a pump out. No problem – or so we thought! We hailed the pump out boat on the VHF, which runs Friday-Sunday in Port Jefferson Harbor during the summer months. Two young folks came by on the vessel and tried to help us open the deck fill cap to no avail.

We sprayed it with WD-40, tried to pound it with a rubber mallet, doused it in PB Blaster, tried to shrink the cap with Endust spray air…nothing was working. The following day Chris, from Branford Landing Marina called, to check in and see how we were fairing on Bear. (We were both very touched by this kind gesture). I took this opportunity to ask him for suggestions on how to get the cap unstuck. He recommended that we remove the entire deck fill fitting and replace it. The following day Jeff crawled down into the lazarette, undid the hose from the fitting, and we took turns pounding at it with a hammer. 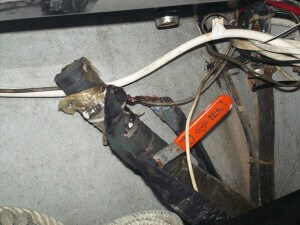 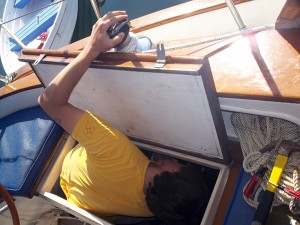 But it still did not move. Finally, Jeff was able to drive a small flat-head screwdriver under the fitting, followed by another, and with the sealant broken, hammered the fitting up from below. 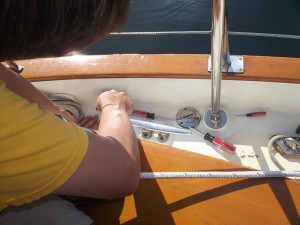 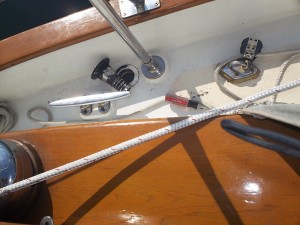 Success #2! Jeff spent the afternoon cleaning up the hole in the deck and mounting the new fitting while I did laundry at the Harbormaster’s Annex.

Later that afternoon we pulled up the anchor and headed over to the manual pump out floating dock in the harbor, as the pump out boat would not be running again for several days. It took me two tries to steer the boat alongside the dock but I figure I will be a pro at this with a little more practice. Jeff jumped onto the dock with our lines and got us secured. 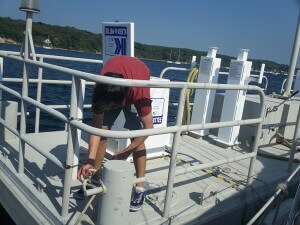 On the pump out dock, there were two hoses available to hook up to our deck fitting. The first one we tried, which had a see-through section on the end, did not create any suction, so we screwed on the other hose and I began to pump. 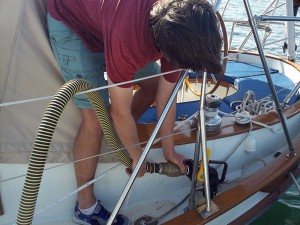 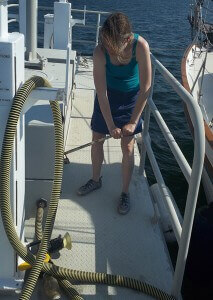 Without the viewing device, we were not sure if the pumping was creating the suction needed to cleaning out our tank. After about 10 minutes of manual pumping Jeff tried to unscrew the hose. Holy grossness! A volcano of poo-filled water erupted from our deck! Luckily, Jeff was able to avoid the worst of it by screwing the hose back in place. I suggested that he go below and pump water into the head while I continued to pump. After another 5 minutes, he released the hose again, and the water burped out a bit, but quickly subsided. Needless to say, we are a bit puzzled about our pump out and still are not sure if we completely emptied the tank. This did, however, seem to fix the problem we were having with the head. So for now, we are pleased to have a working toilet again! Success #3

Not really a broken system, but irritating to Jeff nonetheless, was the length of his hair. It kept falling into his eyes while he was working, so I told him I would cut it for him when we went to shore today. At the end of a long day of work in the library, we went to the Harborfront Park, where Jeff wet his hair in the kiddie water fountain, and I set up a barbershop at a nearby picnic table. 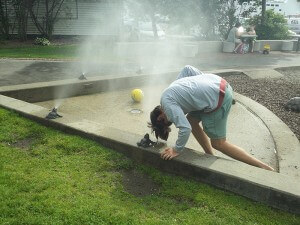 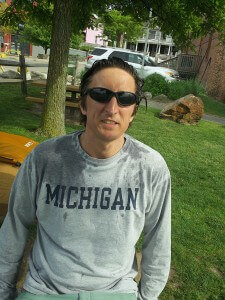 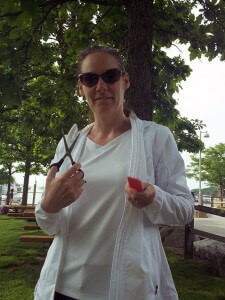 Our haircutting drew a small crowd of onlookers who all stayed a safe distance away from the weirdoes with the scissors! 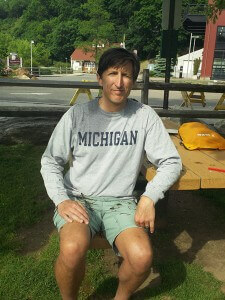 And a few random images from the last couple of days – it wasn’t all work! 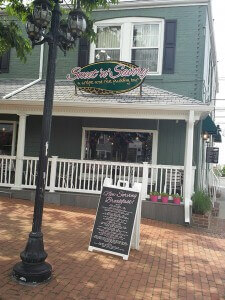 Sweet and Savory the rice pudding/crepe place that makes gluten-free crepes and waffles! 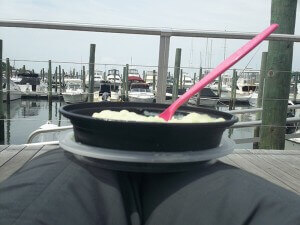 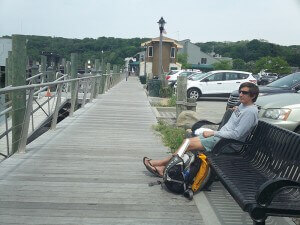 Lunch on the dock at Port Jeff Harbor

Funny boat names abound – Atease is pictured above – Is this At Ease or A Tease? The star-spangled font has me confused 🙂 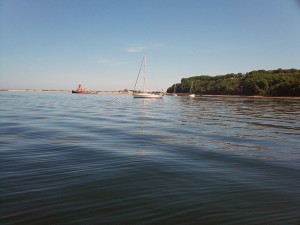 A beautiful evening in the anchorage 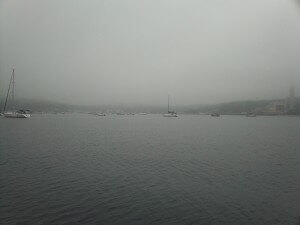 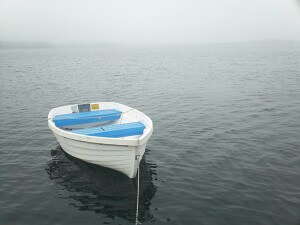 Our dingy, off the stern, on a foggy morning

Cruising Guides to Long Island Sound and Other Resources