A Cruiser’s Review of Annapolis

Annapolis bills itself as the sailing capital of the world with good reason. Regattas, junior sailing, and Wednesday night races, not to mention the regular cruising and day-tripping traffic, crowd hundreds of boats into Spa Creek, which is very much both the town’s center and its main thoroughfare. There are also at least five yacht clubs in the city along with dozens of businesses catering to sailors, numerous marinas, the National Sailing Hall of Fame, and the United States Naval Academy. It seems that everyone in town is a sailor, and locals and visitors alike come down to the waterfront to eat lunch, take a short break, and just while away the time looking at boats.

There are also less obvious ways that Annapolis lives up to its reputation as a welcoming place for sailors. Every street end in the town is a public dinghy dock and they even have sturdy, well-kept floating docks at the head of Ego Alley and just beyond the western edge of the Naval Academy property. After encountering so many towns where there are few, if any, public places to land a dinghy, these accommodations make Annapolis feel incredibly friendly. Moreover, they allowed us to zip around quickly, explore different parts of town, and never worry about the safety of our dinghy. 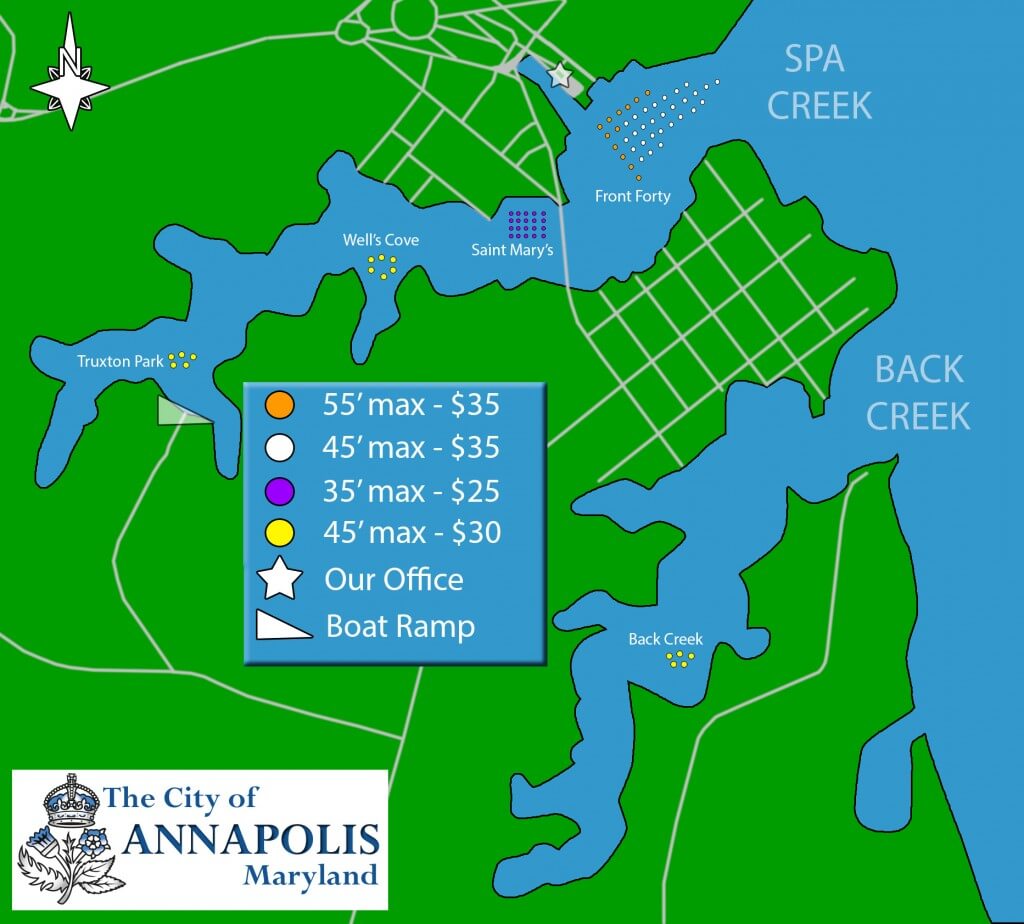 The Annapolis mooring field is also in excellent shape. While I would rather be anchored out in such proximity to town, I appreciate the order and security the mooring field brings to what would otherwise be a chaotic situation with people anchoring on top of one another and derelict boats marring the waterscape. And, although I have yet to stay anywhere other than the mooring field, there is some room for anchoring above the bridge in Spa Creek, in Back Creek, and in Weems Creek (including the Naval Academy’s moorings, which are open to the public when there is not a major storm brewing). We have also heard lovely things about the coves off of South River, below the Severn and not too distant from Annapolis. With the cost of mooring ($35 per night, $210 per week in the main field) comes use of the private bathroom, showers, and laundry at the harbormaster’s office. While the facilities are a little small, the place is rarely crowded and fairly clean. We luxuriated in the hot water and relished having fresh sheets and clean clothes throughout our entire stay. Another thing we indulged in while in Annapolis was frequent pump outs. With a city owned, free pump-out boat, an empty holding tank was just a VHF call away. And, we found the employees of the harbormaster’s office – including the folks who ran the pump-out boat – to be pleasant, helpful, and outgoing.

Many of the private businesses in the area go out of their way to make cruisers feel comfortable. And at no place was this more true than City Dock Coffee. Every day, sometimes for hours at a time, Margaret and I would take up one of the back tables in the coffee shop, slowly sipping our coffee and using the free WIFI. In fact, I would usually awake before Margaret, take the dinghy into City Dock, work until Margaret called me, and then go pick her up and return. Never once were the employees anything but friendly and obliging, and we got to know them all a bit as our stay stretched on. As other customers came and went, many of them would come over, introduce themselves, and chat about boats, recognizing our backpacks, clothing, and squatting as the sign of cruisers.

Annapolis is also such a neat town with lots to explore by dinghy and foot. One day we toured the capitol and its grounds. Another day we dinghied up Spa Creek (and another up Back Creek), eventually tying the boat at a walkway and exploring some of the trails and parks before returning. Walking down any block would turn up interesting architectural elements, funky touches, nautical treats, and historical traces. There are also a host of neighborhoods within walking distance beyond the main tourist area along the waterfront and Main Street, including Eastport, West Street, and West Annapolis (and probably many others, but these kept us more than busy). Bars and restaurants abound, and so do quiz nights (we took advantage of two) and happy hour specials. We already have a couple places we wanted to check out but never even made it to. 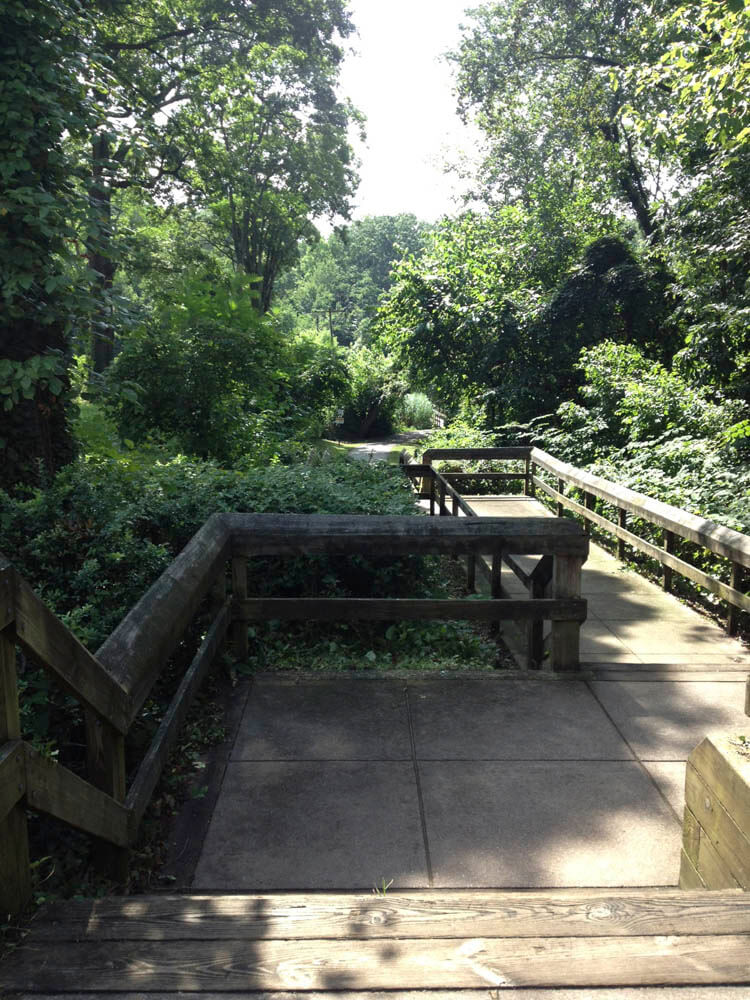 Some of the trails we explored up Spa Creek 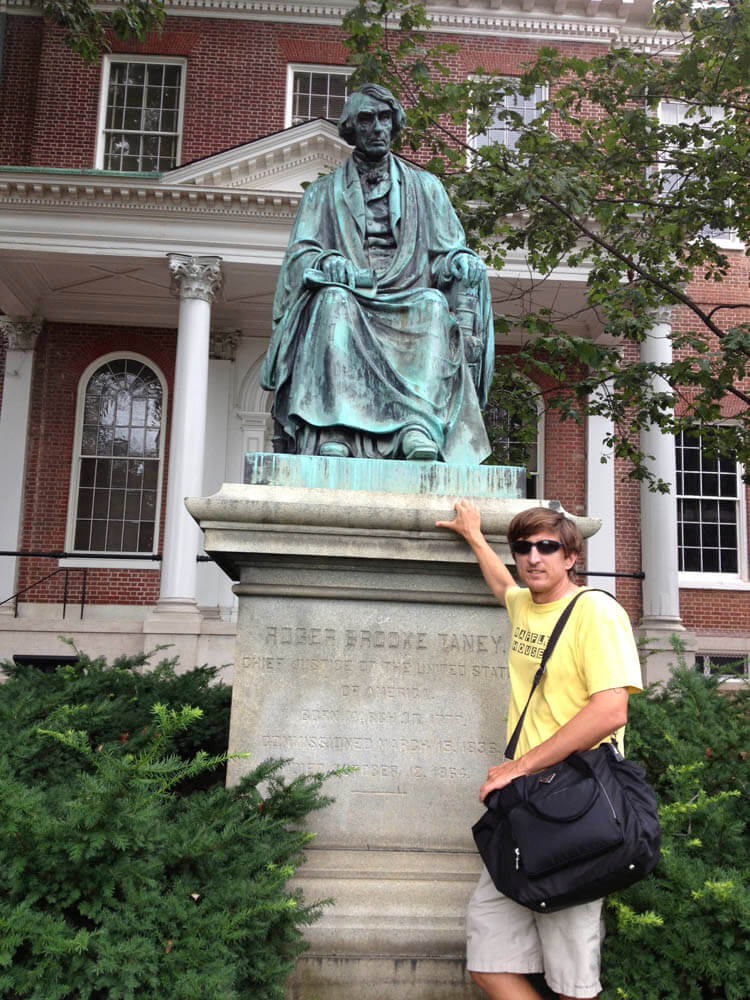 With the Roger B. Taney statue, astounded that Maryland celebrates the man behind Dred Scott 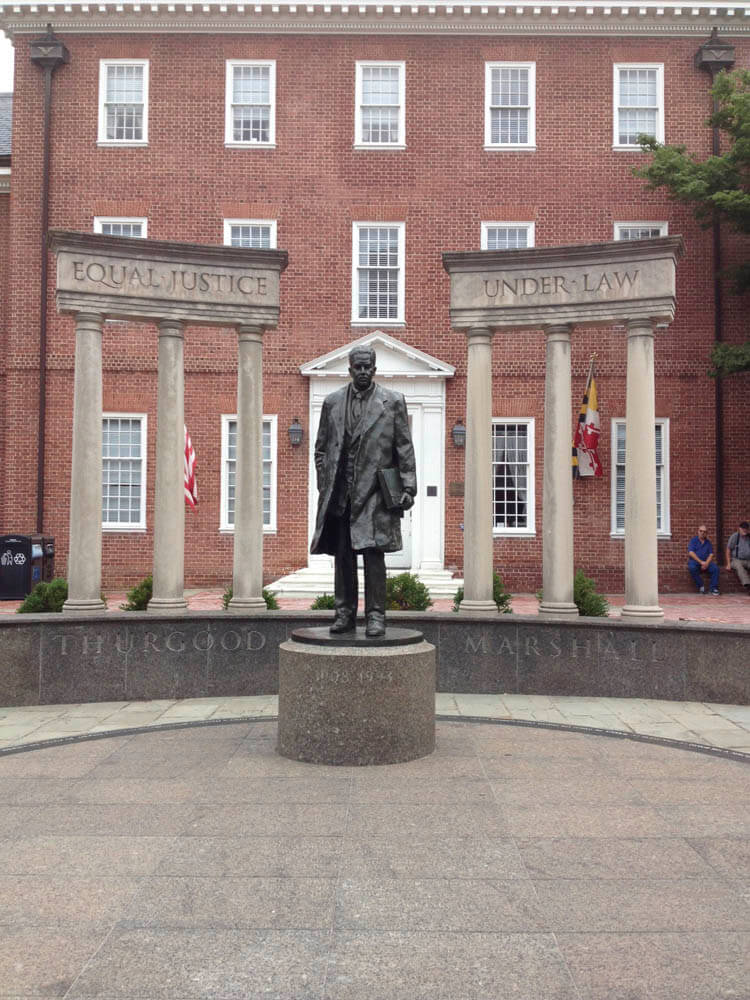 Thurgood Marshall, on the opposite side of the capitol building from Taney 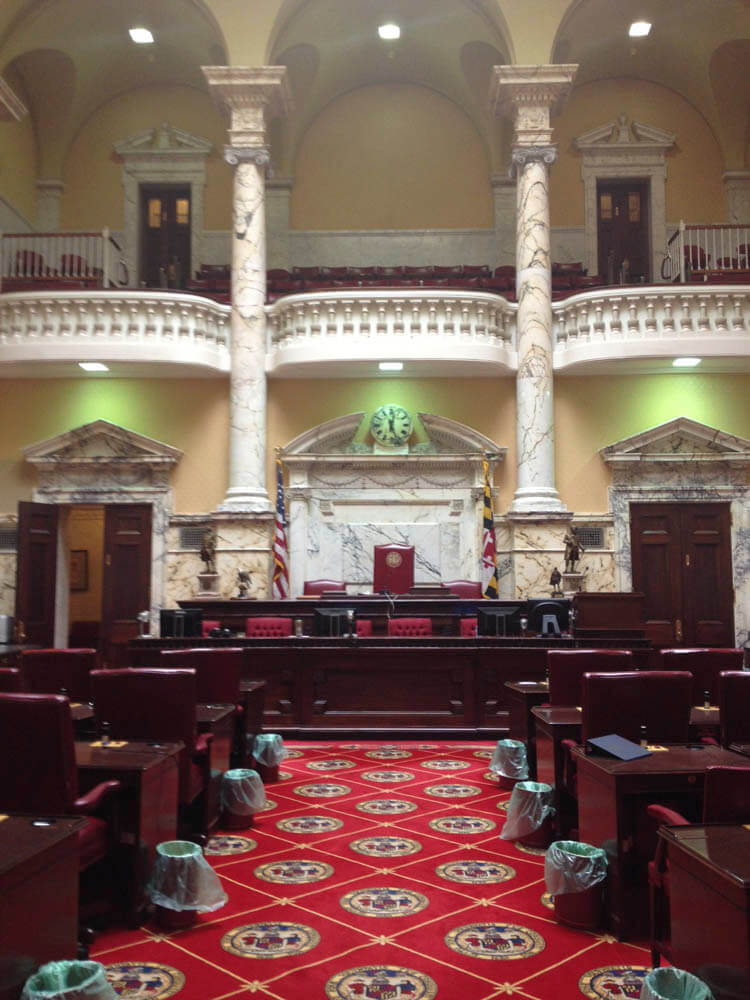 In the legislative chamber inside the capitol 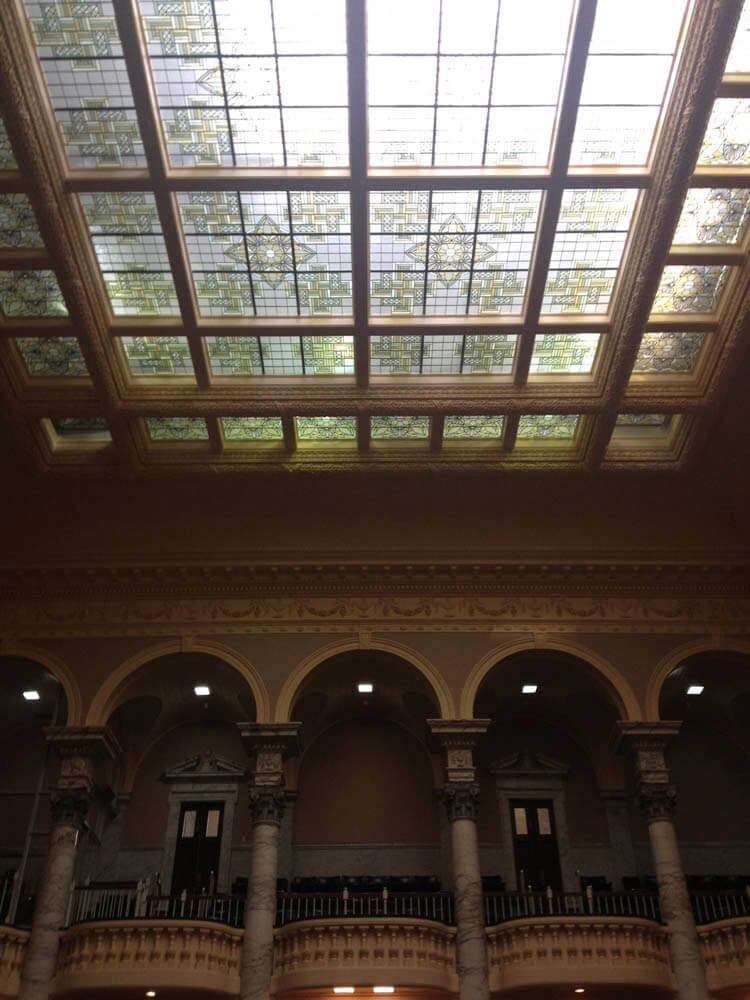 A beautiful atrium inside the capitol 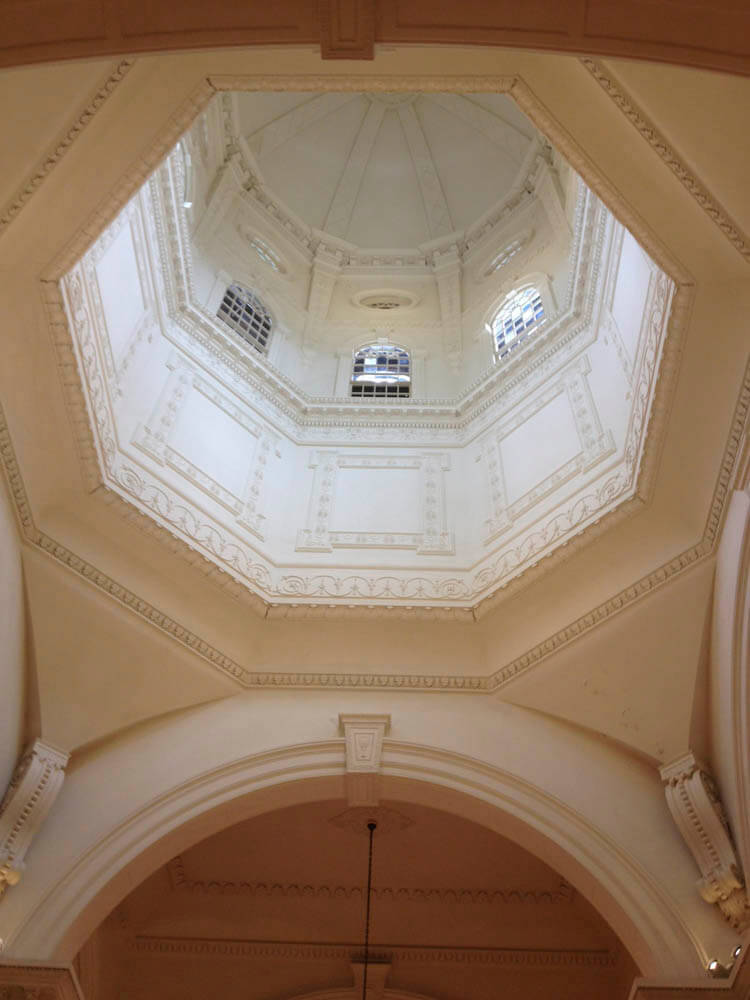 And the dome inside the capitol

Of course, Annapolis does have its shortcomings. For instance, there is no substantial grocery store within walking distance of the water. Fortunately, we had visitors who drove us to the supermarket, but otherwise we would have relied on the farmer’s market, some expensive speciality shops, CVS, and a few quickie marts. Likewise, West Marine is several miles from the waterfront. There is a fairly good public transportation system, but as any cruiser knows, bringing a week’s worth of groceries or a 55 pound anchor on the bus is a bit of a hassle. The town is also rather expensive, especially when you tack on the cost of the mooring. But these are all minor complaints about an otherwise wonderful place. 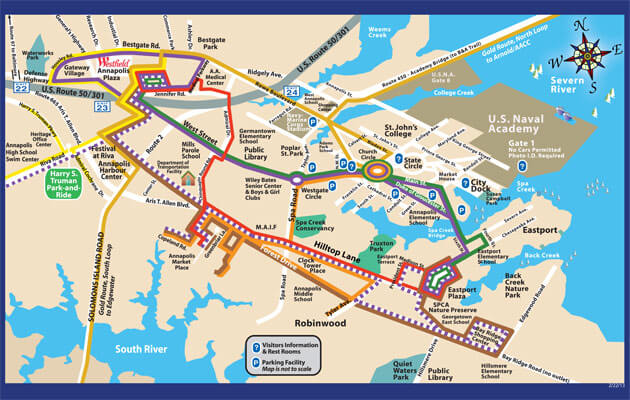 Annapolis public transit map, from the City of Annapolis website

Though other towns abroad and even in the States might argue with Annapolis’s attempt to proclaim itself the sailing capital of the world, it does its best to live up to its moniker. We enjoyed ourselves immensely and cannot wait to go back for a spell.