After getting off So Bella, we crossed the yard, waited another fifteen minutes while the broker took care of more important things, and then finally headed out on the dock to see the Valiant 40 we had also come to take a look at. Margaret and I were both fairly excited about this boat. On Yachtworld, it appeared to be in great condition and the list of equipment – including a new mast and boom – seemed impressive. I had even written in our notes that I thought this boat represented the best value of the Valiants for sale under a 100,000 dollars. Adding to my excitement, the broker explained that this was the owner’s third Valiant and that he was in the process of completing a refit, based on his experiences with the other two, in anticipation of a circumnavigation before health concerns forced him to sell. Unfortunately, it did not take long for the boat’s actual condition to overcome my optimism. Stepping aboard, I spied rusting screws – when there were screws at all – attaching the vents, hatches, ports, and just about everything else; I actually wondered whether someone had mistakenly used non-stainless steel screws. Looking back over my notes now, I see I wrote that many things “need love,” “look tired,” “need rebedding,” or “need replacement,” and that was all before I headed into the cabin. If there was something good about the boat at this point, it was that the broker had decided to leave us alone, telling us to stop by her office when we were done. So, I had lots of time to take in the sorry condition of the boat. Underneath, there was clear evidence of leaks everywhere: the puddle in the engine compartment (and the rusty equipment down there to go with it), the water ingress around the chainplates, and the disgusting sludge on the salon cushions under the side hatches (that the broker had told us were recently installed). 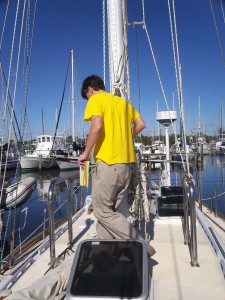 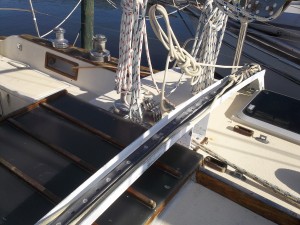 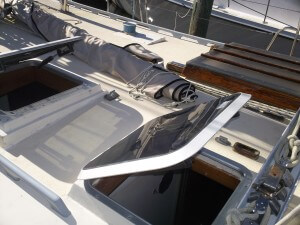 On the positive side, the engine looked solid and the mast and boom looked brand new. There were also a few pieces of equipment still in boxes or uninstalled and off the boat, such as a Garmin chartplotter and the windvane. But most everything that was installed looked like it had been done sloppily in the past year or was practically original and in desperate need of replacement. The only thing worse than a boat that has not been cared for is one that is in the middle of a half-ass refit. 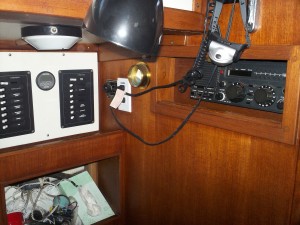 We both came away with added admiration for the Valiant 40 design. The proportions of the cabin seem thoroughly comfortable and appropriate. It seems a lot of thought went into the design and layout of the cockpit, shrouds, winches, and the like. And she felt solid and seaworthy underfoot, even given the sad state of her current condition. At that point, we could not wait to see some more Valiants and, especially, climb aboard Equinox, another Valiant 40 on the hard in the same yard.

And now I should say that I just went back over the Yachtworld photos for this boat, and it still looks stunning. I think someone will pick up this boat after it has languished on the market for another year or so, put in the labor she deserves, and come out with a beautiful vessel ready to cross oceans. It is just not going to be us, at least nowhere near the price she is listed at.

We had plans to look at three boats on our way down to visit Jeff’s folks and this boat seemed to be the best fit in terms of size and price. Like Goldilocks and the three bears, I imagined that the Southern Cross would be too small, the Passport 42 too big, and the Valiant 40 just right. This Bob Perry design has a great layout, with, as Jeff stated, perfectly proportioned sleeping accommodations, galley, salon, and cockpit. While this boat does not have the beautiful joinery of the Passport or Baba, it does have well-crafted, smartly designed spaces that evoke a sense of reliable utility.

As we approached the slip that held Suwendejen, formerly Arcturus, I was a bit startled to find a boat needing some TLC. The toerail greeted us with peeling varnish and the ports were filled with spider webs, which suggested this boat had not seen wind in quiet a while. As I made the conscious effort to ignore the cosmetic issues topsides, I made my way around the boat, photographing each of the pertinent areas that we might want to review later. The Valiant is a known “performance cruiser” and I wanted to take in all of the elements that have given this design such a strong reputation. Afterall, more Valiant sailboats have circumnavigated than any other design*. The cabin top and decks appeared in pretty good shape despite this boat being manufactured during the infamous Uniflite blister years. While there were a fair amount of blisters, we know that these are purely cosmetic, like acne. As the boat was in the water, we did not get a chance to look at the hull, but one can only imagine that this too was freckled with ugly pox. After documenting the decks and cockpit, I descended the companionway steps and was reminded of the Yachtworld ad by the black and tan throw rugs on the sole. I was hopeful at that moment, as the images from the listing showed a beautiful interior, though I thought it odd that the boat would have been sitting long enough between viewings to have accumulated cobwebs. 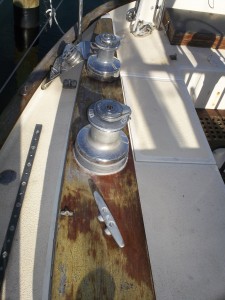 As I opened the ports, daylight crept in to reveal some of the serious issues disguised in the listing. Not only did the ports have crumbling gaskets, but many showed evidence of leaking in the form of brown stains on the walls and gooey drips on the settee cushions below. The salon has two straight settees on each side with a bulkhead-mounted table that folds down, using the mast as a support brace. However, the table revealed further concerns as it scraped against the hatch as I tried to pull it down and became wedged against the mast before reaching a position parallel to the sole. With this information we can assume that either the boat has suffered severe warp due to water damage (we know it suffered hurricane damage) or the mast, which was replaced as a result of said damage, has been installed incorrectly or is just a bit larger than the original mast. While this was not the boat for us – at least not at this time – it did make me long to find a Valiant 40 with issues we would feel comfortable tackling and a sticker price in our range. This boat made us wonder if the Valiant reputation commands a higher price than other boats her size or if this owner was not yet ready to let her go and priced her high intentionally. Only comparison shopping (or perhaps a Q&A with Stanley Dabney) will answer these questions.

Also see Jeff’s addendum to this post on Suwendejen.

More images from our viewing (click image to enlarge): A few images from Yachtworld.com listing: