The Pekin Wiggles on a “Tight-Assed River”

Living in Peoria over the past year, Margaret and I have explored a good deal of the town and surrounding area, including many natural areas. Because of my love of the water, the place that has fascinated me the most (other than maybe the inside of the region’s many dive bars) is the Illinois River. Even before I arrived, the Illinois particularly interested me because of the canal at its northern end that, when it was completed in 1848, effectively connected the Great Lakes to the Mississippi and assured Chicago’s place as one of the gateways to the west. John McPhee also wrote a delightful essay about the river for the New Yorker a while back, called “Tight-Assed River” that explores the Illinois and the barge traffic that still plies it regularly. Since we arrived in town, we have been down to the river to watch this spring’s flood rise and fall, search out retired riverboats at a marina in Chillicothe, take in sailing races off the Illinois Valley Yacht Club, and just investigate and enjoy its waters as much as possible.

This past Monday, Margaret, our good friend Taylor who was in from out of town, and I went in search of the Pekin Wiggles. Detailed in “Tight-Assed River” (that eventually became part of McPhee’s book, Uncommon Carriers

, and is really not to be missed), the Pekin Wiggles is a narrow stretch of river from just two miles south of Pekin (about 10 miles south of Peoria on the opposite bank) to the railroad bridge at the southern edge of that town. As McPhee beautifully describes, the Wiggles is the most difficult piece of water for tug captains navigating their barges on the Illinois. As you can see in the map below, heading north, the river makes a slight turn to the left before sweeping over ninety degrees to the right and very quickly heading left ninety degrees. To make matters worse for someone pushing a 1200-foot series of barges, just after the last turn is a railroad bridge with a narrow center span and an occasionally wicked crosscurrent. As McPhee explains, the successful captain puts the bow within a couple feet of one piling on the bridge (from the pilothouse at the back of the barge string, guided only by his eyesight and information relayed by a spotter on the bow) and, by the time his craft threads the opening, the stern ends up a foot or two from the opposite piling. 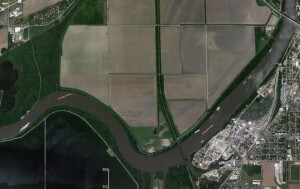 On our trip down to Pekin, we never quite found the Wiggles, in part because none of us had recently reread McPhee’s work. However, we did have a great time driving along the still inundated river, getting out to explore the Pekin waterfront, and eventually stopping at Kuchie’s on the Water, a bar on the river in Creve Coeur, for a late lunch and a few drinks. I am not quite sure it would have been possible to get a good look at the Wiggles as there does not seem to be any roads that get near the river there, but Margaret and I are already talking about trying to attempt another look. 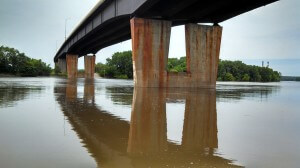 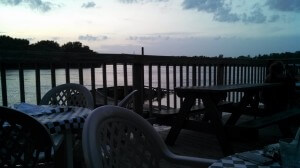 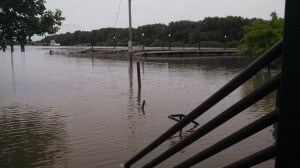 This was only at about flood stage. It had been ten feet higher a month or so before. 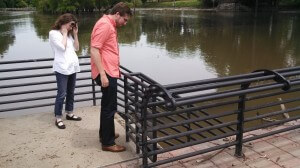 While to my mind, the Illinois River is not quite as exciting as a piece of saltwater, it is a beautiful, interesting, historic, and well-travelled waterway that is also part of the Great Loop that is so popular amongst trawlers and other motorboat voyagers. We intend to keep exploring it in the coming months and years until we set sail.