When we woke up in Still Pond Jeff asked me when I wanted to get going. My immediate response was “now”. It had been a very rocky evening, and with no plans to go ashore, there was no reason for us to stick around any longer. Plus, we were heading to Rock Hall, which would be a long haul as we had to head South past the channel entrance and then double back to avoid a large shallow area filled with crab pots.

The sail itself was rather uneventful, though we did bash our brains out for a long portion of the trip with winds on our nose at 16+ knots. I am realizing that it is a rare occasion that winds blow east or west on the Chesapeake and that if you are sailing on any type of schedule, you will often be confronted with the uncomfortable options of bashing into the wind or adding many extra miles to your trip by tacking across the Bay to find favorable winds.

As we approached Rock Hall, Jeff reminded me that when he was there previously he had found a place that let him bring his dingy to the dock, and use all of their amenities, for $20 a day. This sounded fabulous, as it had been a couple of warm days since we had our last free shower at Skipjack Marina Resort, and we were ready for a little pampering.

As we came into the narrow channel, we realized that new moorings had been placed in the spot we planned to anchor. While we tried to call the marina who owned the balls to no avail, we watched another boat maneuver around us tenuously, as though watching for our cue on where to find good holding and swing room. After much discussion and a few investigatory trips through the field and around the perimeter of the channel, we decided to drop to hook just at the end of the new mooring field. Once we were content with our anchor we watched as the other boat followed suit.

As Jeff could not remember the name of the marina that he visited on his last trip, we decided to pack up the dingy, and go exploring. Though it looked a bit different than he recalled, with some new dock space and slips, we ended up at the Haven Harbor Marina. And it was just as glorious as he recalled. For $20 we had use of showers, an in-ground pool, shuffleboard, the day room with wifi, and perhaps best of all, bicycles. With our borrowed wheels we were able to explore town, stop for lunch, and make an important run to the liquor store.

While tooling around the waterfront, we stopped at the Harbor Shack for lunch, a waterside bar and grill with a lot of character and a huge menu. Aside from the pesky flies, our food was decent, and but the atmosphere made the place. Jeff pointed out one of the bar signs that showed a female pirate with a full treasure chest and the text which said “You can have my chest, but leave my booty alone!”. Oh, pirate humor. 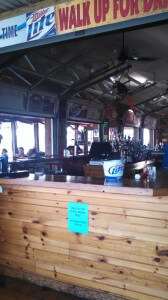 A quick tour through downtown revealed a quaint Main Street decked out with festive flags from the recent holiday. The mural below shows the importance of the water to the community. More Southern than Northern, this town reminded us of the blurry border that runs through Maryland. 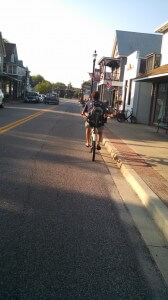 Jeff riding in front of me down Main St. Rock Hall, MD 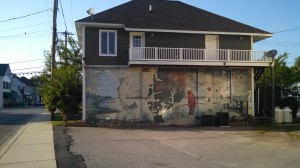 Back at the marina, Jeff pummeled me at shuffleboard, though I think I did pretty well for my first attempt at the game. 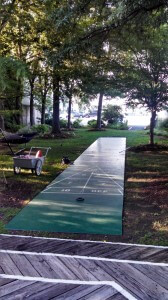 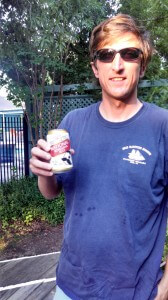 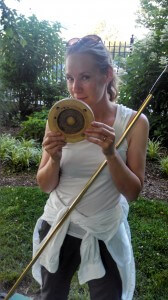 Then we headed for a dip in the pool where a couple of kids had made up a newfangled game of catch in which one would leap into the end of the pool and catch the ball mid-air for points. It was fun to watch them show off for strangers and to simply enjoy the freedom of childhood.

One Response to Still Pond to Rock Hall