Sore Throats and Other Issues, Along With Some Progress!

Margaret and I have been running into difficulties unrelated to the boat. Of course, we still have lots of frustrations born of Bear too. But the last couple days, both of us have been feeling fairly under the weather.

The sickness began on New Year’s Eve when Margaret complained of a sore throat in the morning and then took a long nap after we returned from the boat. The following day, she was feeling a bit better, but I also awoke to a sore throat and mild achiness. By the second, a day that we had intended to take off from boat work, hang out with friends who had stopped by in St. Mary’s, and explore Cumberland Island National Seashore, I was running a fever and was not interested in leaving bed. Margaret was only slightly better and lounged around our hotel room and took care of me before heading out to dinner with our friends. 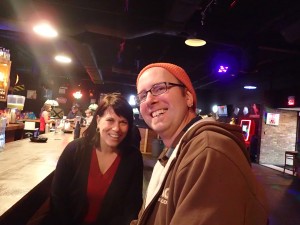 Our friends Jason and Amy, out with Margaret at the bar attached to our hotel

Although I awoke much better today, neither of us felt great. Margaret thought we should take it easy, but I insisted we get some boat work done, considering the large number of jobs we still have to complete and the ever-receding time we have left here in southeastern Georgia. We ended up spending four hours working, but now our condition has regressed a little. Each day, I keep hoping, and almost expecting, that we will wake up and be perfectly fine. Hopefully that will be the case tomorrow morning. 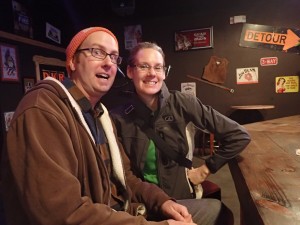 And Margaret, looking chipper, hanging out with Jason and Amy

As far as the work on the boat, we are moving along but still encountering lots of obstacles and frustrations. Our biggest issue is that two orders of materials that we placed have yet to arrive. Both should be here on Monday, giving us a big boost. In the meantime, we have been tackling some woodworking, electrical, and plumbing issues as best we can. But we continue to lack the foresight to get all the materials together before we start to tackle a project, which usually means we get a few steps further along on a task before we realize we need another tool or part before we can proceed. I tend to get far more frustrated than Margaret with our slow, incremental progress, but as Margaret continually reminds me, we are working, accomplishing things, and learning a lot.

Today, we initially decided we would simply service two winches, imagining that this would be a manageable task that we could undertake on deck in the sunshine. Moreover, I had serviced the port genoa winch last spring without a real hitch, so I thought I understood the task completely. Unfortunately, and what should be, by now, unsurprisingly, we encountered some problems that quickly derailed our plan. On the way over to the boat, we picked up some mineral spirits, which we would use to help clean the old, gunky grease off the various winch innards. Arriving at the boat, I spun all the easily accessible winches – the three on the mast are covered by the shade cloth – to ascertain which ones needed work the most. Our starboard staysail winch turned a bit slower than the others, so I figured it was a good candidate. As I began to take the drum off it, I realized it was not the same brand as all our other winches, meaning we did not have the instructions for servicing it. And, within a few seconds, I realized it was put together far differently than the Barient winches we did have the instructions for. So, we instantly decided to tackle the starboard genoa winch and the port staysail winch, both of which are the more familiar Barients. However, I could not get the cap off the top of either winch. Suddenly I remembered that the instructions called for the use of a spanner wrench, which we did not have. The previous year, the cap was loose enough for me to get off with just a screwdriver. So, with that, we put aside the winch project and added a spanner wrench to our list of things to pick up when we head down to the West Marine in Jacksonville in a few days.

Other frustrations awaited us as we began other projects, only to find that we needed another part or tool. So, before long we were heading out to Lowe’s, which is thankfully just a few miles down the road from the boat yard. After picking up some items and returning to the boat, we both got down to work. Margaret managed to tackle a few woodworking jobs, and I finished replacing the valves and some hose on our freshwater system. After the earlier problems we encountered, we both left feeling like we had made some real progress.

Tomorrow, if we are both feeling well, we will install our new water filter (I think we have all the parts!), continue with the woodworking, and make progress on a few other tasks. Tonight we are just relaxing in the hotel room, sipping tea for our sore throats, and getting caught up on new videos by Sail Life, White Spot Pirates, and a few other folks.

Sorry there were not more photos in this post. However, you can check out our video from the day.

2 Responses to Sore Throats and Other Issues, Along With Some Progress!