On Our Way Home from Strictly Sail

We are on I-55 heading south from Chicago, and it is snowing and slushy, and we already stopped to buy a gallon of wiper fluid because we ran out. Yes, we are on our way home from Strictly Sail, where sailors of the Midwest go to get a moment of respite, refresh their memories of summers past, and rekindle their dreams. In the midst of our boat search, we did not need much help dreaming this winter, even though the weather in Illinois has been horribly atrocious. But we did have a fabulous time at the show. These are our immediate impressions, jointly composed in the car. 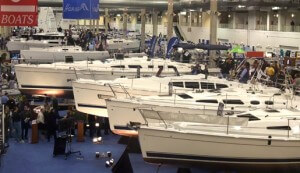 Inside Navy Pier at the Strictly Sail Boat Show

We attended the 11:45am seminar together, going to Lin Pardey’s Controlling Cost While Cruising. For the next three seminars we split up. By the time the 4:45 seminar block rolled around, we were both a little tired of sitting in rooms, even with John Kretschmer and Bob Bitchin’ on tap. So, we called it quits and headed for the floor with all the booths. Between the two of us, we had sampled seven different seminars.

Lin’s seminar was simple, straightforward, and packed with great ideas to keep your budget in check. She had not only thought of ways to spend less money but also to save money depending on your cruising lifestyle. I plan on covering it in a future post, so I will leave it at that.

I have been reading more and more about rigging since most of the boats we are looking at will need some, if not all, of the rigging replaced. For instance, just yesterday I spent an hour or so reading about Dyneema Dux on 59 Degrees North. Moreover, Drake has been redoing his mast and rigging in his latest videos, heightening my interest in rigging even more. So, I was primed for the rigging seminar. Hearing Colin’s horror stories about customer’s rigging – and seeing his pictures – is sure to keep me up at night. But the seminar also taught me a few things and made me realize just how much more I have to learn.

After the seminars, we spent about two hours wandering the booths and buying a surprising number of things.

Mark at the Sailrite booth hands down wins my vote in this category. I walked up to the booth and asked him to explain to me the differences in the machines and their capabilities, and he very patiently covered all of the stitching techniques and accessories available for each of the models. He even did some demo stitching to assure me of the Sailrite’s ability to stitch through nine layers of Sunbrella material. I already wanted a sewing machine going into it, but now I am sure Sailrite is the one.

I have been getting some insurance quotes recently from the likes of Boat US and Progressive. The prices they came back with were not too outrageous, but I came away doubting they had any idea what I was talking about when I said we would not be living in a marina, but instead staying at anchor. That experience made me a little worried that we would somehow be violating the terms of our insurance policy. Contrast that with Pantaenius, who understood exactly what we were up to and had structured their policies around just the sort of cruising we intend to do. And, unlike the others I had contacted, we could continue being covered by Pantaenius if we decided to cross the Atlantic or cruise the Caribbean. Moreover, Cary Weiner, the president of the company, was the one who was so kind to explain their policies to us.

One of our main reasons for going to the boat show again this year was to get the free subscription to Bluewater Sailing Magazine by simply attending any seminar and filling out a contact form you earned yourself two free issues. It was a better deal last year, as we received a full year subscription. But hey, free is free, so I am not complaining.

Jeff: A Spice Above, gourmet dips (I wanted to say my Raymarine catalogs, but Margaret said that was not in the spirit of the category)

There were two guys there with about thirty party dips in all different flavors. They gave me a bunch of pretzels and let me sample them all. I chowed down for a while. And, what’s more, the dips were delectable. However, they were also five bucks apiece, so we did not buy any.

It gives me hope that we will be able to pay for our cruising for a long time to come. And it makes me excited to think about learning a new skill that I can use to help other people continue their sailing adventures. Though, I will have to get over my gag reflex at a whiff of diesel fuel if I want to become a marine mechanic.

Jeff: To make sure that we have our surveyor look closely at our decks

Now, this might not seem like a particularly profound piece of advice, but it was given to me by Larry Pardey. Margaret and I had the pleasure of chatting with Larry for a bit. It really was one of those moments that I will long remember for a host of reasons. He seemed decidedly old. Recognizing that made me a bit melancholy, as it was apparent that this great voyager probably does not have that many sea miles left. In those few moments we shared with him, I also fully realized just how much he and Lin have inspired me and so many others, and I was almost overcome with gratitude. And, while he was genuinely interested and inquiring about our plans, I felt I also caught a glimmer of wistfulness, as if he was both so pleased to see another couple chasing their cruising dreams at the same time he would give anything to be starting all over himself. 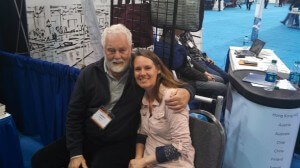 Thing We Most Want to Buy Now

See above about the Sailrite machine.

I tried on a few PFDs and have yet to find a comfortable fit. Hopefully we will get to a West Marine and be able to check out more options soon. Jeff says I need to order some catalogs.

Jeff: there really was not anything I came away desiring

Sure, there was a lot of stuff that I kind of wanted, but there was nothing that I felt like I really, really needed, or even really, really desired. After we get a boat, I am sure that will all change, but for the moment, I am content to just learn and gather information. Of course, I did get an expensive Christmas present from my parents at the show: a 100-ton captain’s license course with sailing certification from the Mariner’s Learning System (and some deck shoes).

Thing You Now Really Want to Learn to Do, Partly Inspired by the Show

One of the seminars I attended was Safety At Sea that I anticipated would tell me a bit about medical issues while underway. Unfortunately, that subject was not discussed, instead the focus was on gear, communications, and equipment. I want to be sure that one of us on board has the training to deal with any medical emergencies that we may have while cruising. And, since Jeff does not like needles or blood, I guess that person is me.

Jeff: I want to become a rigger

As I explained above, I have been studying up on rigging recently. And I have also recognized that knowing how to replace the standing rigging on our boat would save us a ton of money. Being able to do other people’s rigging would also be a skill that could help us pay our way while we cruise. I would like to find a job working as a rigger, learning the craft being my main remuneration.

We are now on the home stretch to Peoria, and the weather has not improved in the least. Fortunately, the ride has gone smoothly as we talked over our experiences at the boat show and continued to think about the future.