Getting to Know Our Autohelm – Raymarine Type 2 Linear Drive Autopilot

I recently took apart our Autohelm – now Raymarine – Type 2 Linear Drive Autopilot to diagnose and correct a reoccurring issue we were having over the summer. Before starting to take it apart, I was a bit terrified of how complicated the thing would be on the inside and, ultimately, whether I would be able to get it back together, let alone fix it. But eventually I embraced the task, knowing I did not want to go through another summer worrying about whether our autopilot would continue to work and, if it broke, whether I would be able to fix it. The insides of the unit turned out to be a lot simpler than I had imagined, though I will not be certain I fixed the problem until we spend some time with the pilot on while underway.

Knowing how many people have these units, how complicated they appear to be, and how little information on them that is out there, I shot a video of me reassembling the unit, which should familiarize anyone who is interested with the insides of a linear drive autopilot. I also figured I would relate my experiences here and point to the Autohelm diagram that I found essential. 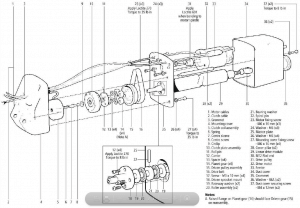 Last summer, we had two distinct problems with our Autohlem. First, on our way down from Sandy Hook to Cape May, our ball actuator joint sheared off. Fixing that was just a matter of finding, ordering, and then screwing in the new part. Our second issue was a little more nebulous and a lot more difficult to troubleshoot effectively. While running from a storm on the Magothy River, we encountered some problems with our steering after having just turned off the autopilot. The steering would work to starboard, but catch while turning to port, making it difficult to go left, but, more significantly, worrying us about the future of our autopilot and the potential for more serious steering issues. The same glitch reoccurred from time to time the rest of the summer, always immediately after we had switched off our pilot after a long haul. And once, while making the 60 mile trip from St. Michaels to Solomons, the autopilot just stopped working after steering us off course, presumably for the same reason (it definitely was not a compass or computer problem).

In St. Michaels, I had spent some time researching our problem and tried to take the unit apart. A pesky metal circlip (c-clip, snap ring, Jesus clip) kept me from getting at the innards that time, but it was at that point I decided I would disassemble the Autohelm this winter when I had space, time, and access to stores. And that is exactly what I finally got around to doing this past week. 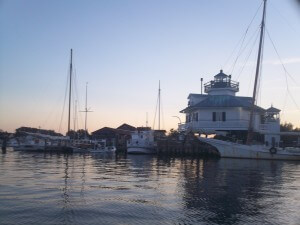 St. Michaels at sunset from our anchorage

Thinking I needed a special tool to open the circlip, I hunted around town at the auto parts, hardware, and, even, sewing stores. While I could find various tools for circlips, none of them had prongs narrow enough to fit in the tiny circlip on the Autohelm. I then spent about fifteen minutes trying to sort of pry it off, which eventually worked. If anyone knows where I can find a pair of snap ring pliers with very small prongs (about the size of a standard needle), please let me know.

After successfully opening the circlip, I was able to access a good deal more of the unit. However, I also had to remove some more screws and two roll pins to expose and take apart the entire autopilot. To get the roll pins out, I just supported the shaft of the unit with a piece of wood and used a punch and hammer to knock the pin out. You can see exactly what I am talking about in the video. 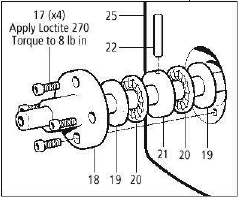 Close-up of the inner sanctum of the unit

Our Autohelm had a broken roll pin (#22 on the diagram) on the very inside of the unit. I doubted that was the source of our problem, though, because the broken pieces seemed secure inside of the hole. Moreover, I thought I could have snapped the pin myself when I was removing it.

Without any other obvious issues with the unit, I decided to call Raymarine’s technical support line, which I had read rave reviews about online. On the first attempt, they had me leave a voicemail because they were too busy assisting other customers. The recording told me they would call back within 10 business hours. After they failed to return my call by the end of the next day, I gave them another call. This time, I spoke to a real person who was also quite competent. We talked over the symptoms and discussed the inner workings of the unit. He seemed to think the broken pin could have been my problem, saying that the pin would probably not fall out, but a piece of it might have been extending out the side occasionally, obstructing the proper movement of the arm.

Though I was not completely satisfied with the explanation, we could find no other issue with the unit. So, I went to Fastenal to get replacement stainless steel roll pins of the proper size. It was my first trip to Fastenal, and I left wondering how I could have never been there before. If you are not familiar with the store, it is a fastener super center focused on customer service with outlets across the States. They did not have the odd metric roll pin in stock, but were able to order them to be delivered the next day. Once I got the new pin, putting the autopilot back together was a breeze, except the pesky circlip. But, first, I sprayed the entire arm – as the Raymarine tech suggested – with a graphite lubricant. Check out the video to see for yourself.