From Cape May, up the Delaware, and through the C&D Canal

After ten days in Cape May, we had mixed emotions the Sunday before we left. As we tried to take care of last minute chores like provisioning and cleaning out Chip’s Jeep, we also managed to fit in a couple things that we had been wanting to do all week: walk through the lovely streets of Victorian homes, check out the lighthouse, and play mini golf. All the while, I felt elated knowing we would finally be underway again. But, at the same time, there was an ever-present sadness at the thought of departing, something I really have not felt before or since on this trip. I am sure my melancholy had quite a bit to do with leaving Chip and Barbara and their wonderful hospitality, along with some regret at not having done a few more of all the fun activities that they had told us about. 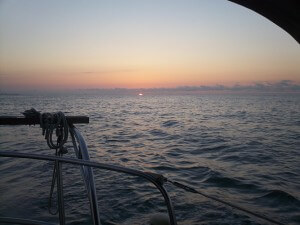 The sun just cresting the horizon off Cape May.

It was not until about 10pm that we finally returned to the boat and started readying her for the swells of the ocean and possible chop in the Delaware. The weather looked perfect for the following morning with no threat of afternoon thunderstorms and a building southeasterly breeze that would give us an added boost as we raced up the river with the current. But, as our preparations dragged on towards midnight, Margaret indicated that she thought we should wait until Tuesday so we would be well rested. With plans to pull up anchor at 4:30am, we were assured little sleep. Comparing the weather forecast for Monday and Tuesday though, I continued to press for our initial departure. Eventually, Margaret acquiesced, but I sure hoped we would not run into any weather or sleep related issues the following day.

Though the Cape May Canal would have cut about 15 miles off our trip, depositing us directly into Delaware Bay, we had chosen to go out the inlet and about ten miles in the ocean to the main channel into the bay. Our mast height is 56 feet and the mean high clearance of the bridge through the canal is only 55 feet. Though we would be passing through the canal at low tide, our other issue was our 5’8″ draft. We had read some warnings on ActiveCaptain that people had encountered only five feet through portions of the canal. So, we opted for the less worrisome, longer route around. With the greater distant, we would need to take full advantage of the flood current, which began at the mouth of the bay around 6am. Thus, at 4am, I was up and readying the boat, which took a little longer than anticipated when we had to tighten the alternator belt. Nonetheless, we had the anchor on deck just before five and were heading out the inlet shortly thereafter, with Margaret fast asleep in our port sea berth. 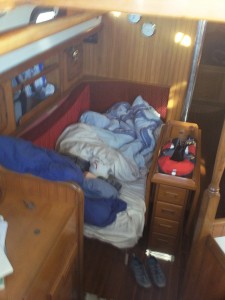 Turning south after passing the bell buoy outside Cape May, I pressed the “Auto” button on the pilot to hold our course. Without hesitation, the Amazon part did its job and steered us on our way. Relieved of the consuming task of steering, I watched the building dawn and, finally, the rising sun. I was also able to practice some coastal navigation, taking sights off the lighthouse and buoys with the hand-bearing compass. From time to time, dolphins came by to see what was going on, splitting off from pods that were nearly always in sight. At one point, I even called my Dad and chatted while an adult and two baby dolphins came right along side. It was a glorious morning, made all the more so by the freedom the autopilot provided. I even rolled out the genoa to take advantage of the couple knots of breeze coming on our beam. 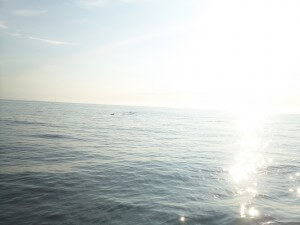 If you look closely, you can see some dolphins. Objects in the photo were closer than they appear! 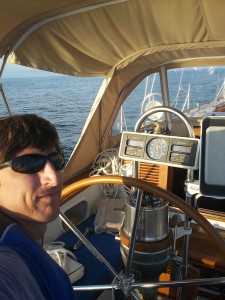 Rounding the “corner” into Delaware Bay, there were few boats about and no commercial traffic, which was a bit of a surprise. The only other time I sailed up the Delaware, big ships seemed to pass continually, causing a bit of anxiety. This time, I stayed vigilant, but only had to contend with a few container ships the entire day. Around 9, Margaret appeared on deck, and I related what I had seen just as we started to really catch the current, seeing speeds of around seven knots the rest of the morning. By noon, we were into the river itself, as opposed to the bay where it was often hard to see one side, let alone both at the same time. We had also started to get a little tired of the relentless trek north. So, we started playing cards, listening to Pandora, and making some goofy pictures. Within a few miles of the entrance to the canal, the wind had picked up substantially, putting an end to the cards and causing us to roll in some of the genoa. 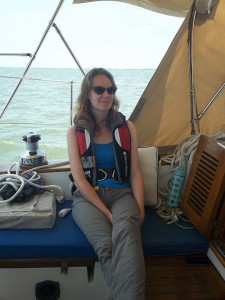 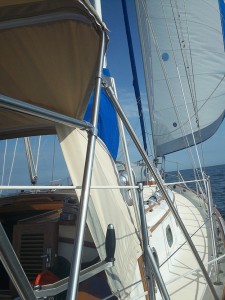 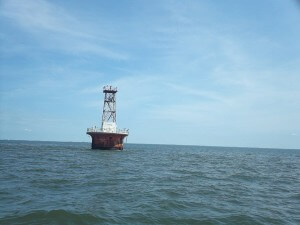 One of the many lighthouses that mark the Delaware River shoals. 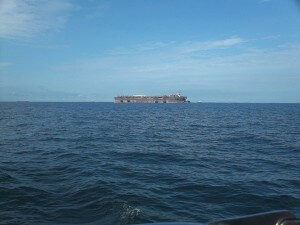 One of the few ships we saw along the way. 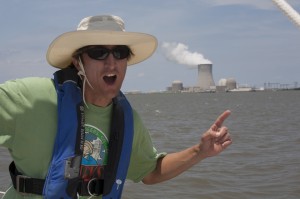 Slipping into the canal, Margaret took the wheel and we put away the sail completely, but still churned along at about 6.5 knots, pushed by the now ebbing Chesapeake current. By that point, I was fairly spent, and just splayed in the cockpit and thought longingly of cracking that first beer once the anchor was down. Inevitably, the miles passed under our keel, and Margaret turned the helm back over to me as we got into the outskirts of Chesapeake City. Chesapeake City is a misnamed little village three or four miles from the western, Chesapeake Bay, end of the canal. Located there are a few marinas and the only place to put down the hook along the entire length of the canal, in a small basin on the south side. It also happens to be right at the border between Maryland and Virginia. As such, it is the place where the Chesapeake and Delaware pilots change off. I had never had the opportunity of seeing a big ship in the canal, much less make the change here. But, just as we rounded the last turn, a huge ship loomed with a pilot boat alongside. While I got as far to the side of the canal as I dared, we watched – and photographed – while the pilots came down the Jacob’s ladder and into the moving pilot boat below. 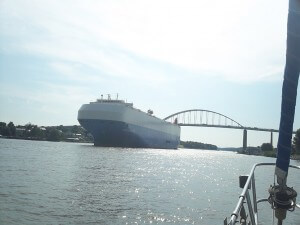 The large ship coming alongside in the canal. 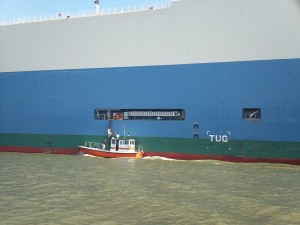 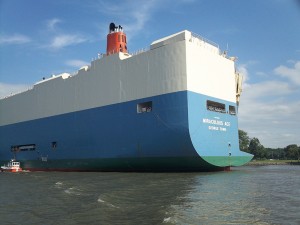 And the good ship passing by us.

After the ship passed by, we turned into Chesapeake City. Right as we entered the basin, an alarm started to sound. It took a moment or two before I realized it was only the depth alarm, telling me we had mere inches under our keel. Even so, we made it in without further incident and set the anchor in eleven feet of water at the far end of the anchorage. Within a few moments, I cracked a beer and jumped in the water in celebration. And not too much later, we polished off a dinner of chips and guacamole, and I went to bed followed, no doubt, by Margaret soon after.

One Response to From Cape May, up the Delaware, and through the C&D Canal