Today was a learning day. We acquired lots of knowledge and new skills. How did we have the opportunity to learn so many things you ask? Lots of things went wrong. Below you will read some of our mishaps and adventures that are now amusing and comical stories. But as you can imagine, in the moment, they were challenging and stressful, to say the least.

We awoke to a cold front that had crept in as we slept. Jeff had a pretty sleepless night as he worried about our Bahamian anchor and the racket of the traveler knocking around on its track. We had a quick breakfast in bed of Lara Bars and decided to dress warm and start our day. The forecast was for low 60’s and for a bit of wind, which was evident in the chop that lapped the dingy as we traveled from Punta Blanca to Cayo Costa. Dense sea grass in the shallow water of this area created a perfect feeding ground for manatee and on our way across the bay we almost hit one. Affectionately referred to as sea cows, manatees are slow moving sea mammals, which can easily become victim to fast moving boats.

About two-thirds of the way across the bay, on route to a small creek we hoped to investigate, the dingy engine died. Again. We tried to continue on to Cayo Costa by rowing, but the wind and the current were too strong. We turned around after Jeff had gotten quite a workout, and headed back to Sojo, amusing ourselves with a verse or two of Peter and Davy Rothbart’s awesome tune “Damn, the booty don’t stop”.

As Jeff struggled to row against the chop, one of the oarlocks broke. As you can imagine, this made our journey all the more difficult. We switched positions and tried to use the dingy like a canoe, with me at the front, rowing for direction and Jeff aft, rowing for power. Our efforts were futile and we ended up being pushed by the current past our anchorage to the point of Punta Blanca. In shallow water, we got out and began to walk along the shore, towing the dingy by rope. I asked Jeff is there was anything we should worry about as we walked along and he said to be sure to shuffle my feet just in case there was a sting ray laying camouflaged below the sand. This got me a little worried, as I envisioned a painful barb piercing my foot at any moment, so I headed closer to shore, hoping to walk along the beach. However, once I got to the beach, I found the sand littered with jellyfish. Ick! Having been stung by a school of baby jellyfish as a kid while on vacation at Virginia Beach, I had no interest in taking my chances with these sticky blobs. At this point, I hopped in the boat and Jeff dragged my pansy ass around the point before hopping aboard and rowing us, once in the protection of the anchorage, back to Sojo.

Back on board it was beer o’clock! Jeff cleaned out the dingy engine again and I packed up the salon for our passage down to Safety Harbor. We pulled up the two anchors without incident and chatted up a couple on a lovely little pilothouse on our way out of the anchorage. We saw many dolphins and birds on our way down the ICW, but very few boats crossed our paths. I proudly steered Sojo through the narrow and tricky lane to Barnacle’s, where we docked the boat, but not without incident. As we pulled up to the dock, Jeff explained to me how to steer and power the boat to allow him to work the lines. Being new to sailing, I am not sure how to describe what went wrong, but something went awry and Jeff began running around the boat, trying to steer and tie up singlehanded. Quickly we got things under control, set the bumpers and safely secured the boat, but not before Jeff broke two toes. He thinks he jammed them on the turnbuckle for a stay, but isn’t really certain. His toes were immediately showing signs of bleeding and bruising, but he was a tough cookie, and continued on with the trip. (It was more than 2 months before Jeff could run again.) 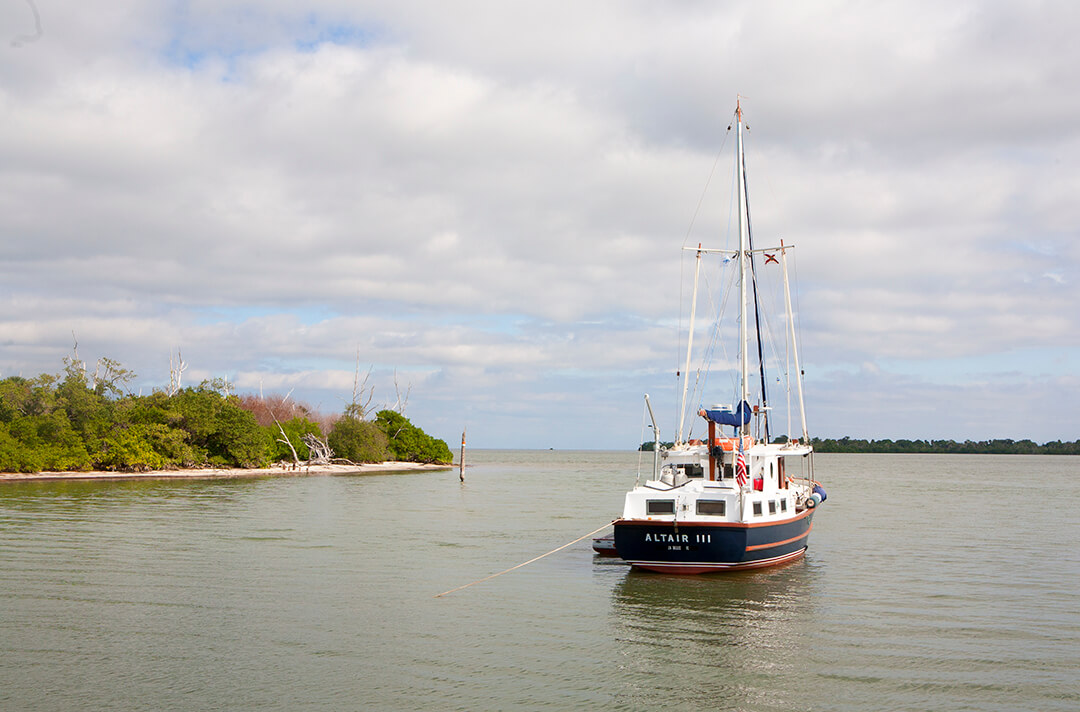 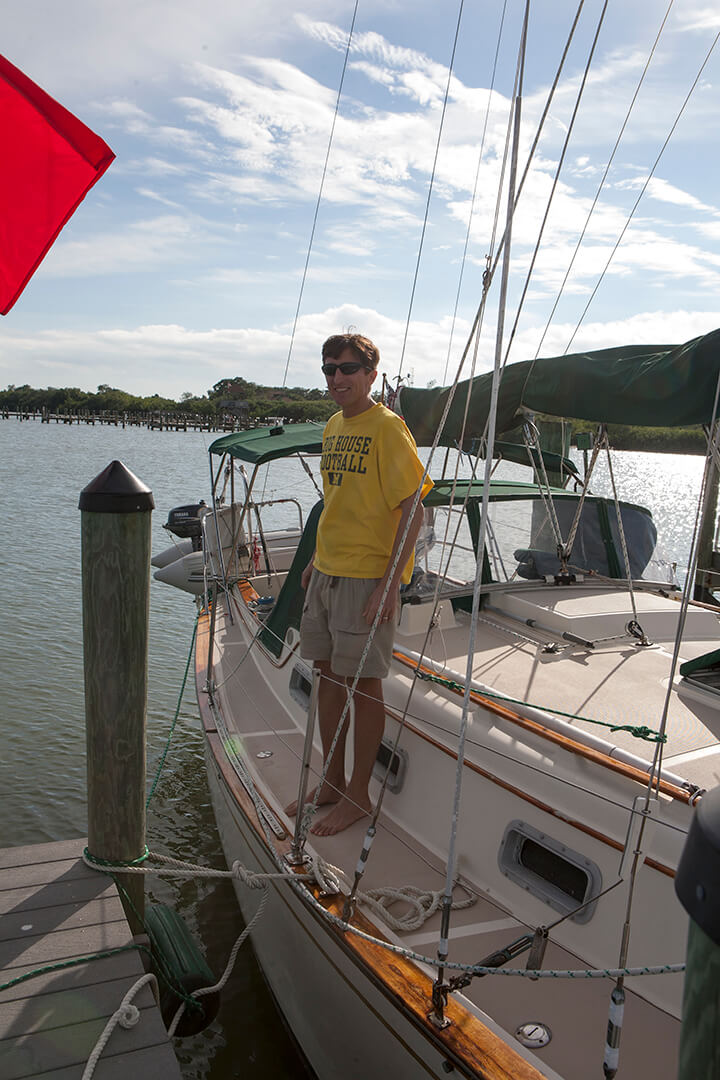 Jeff looking pretty relaxed for having just broken his toes 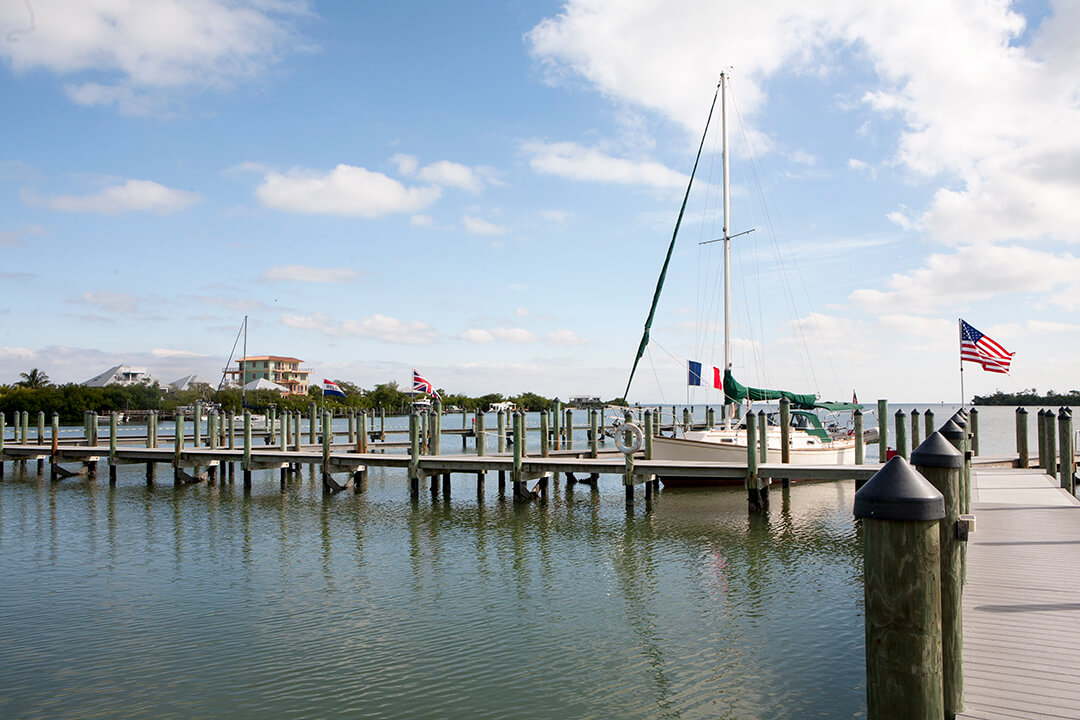 Sojo docked at Barnacles on Captiva 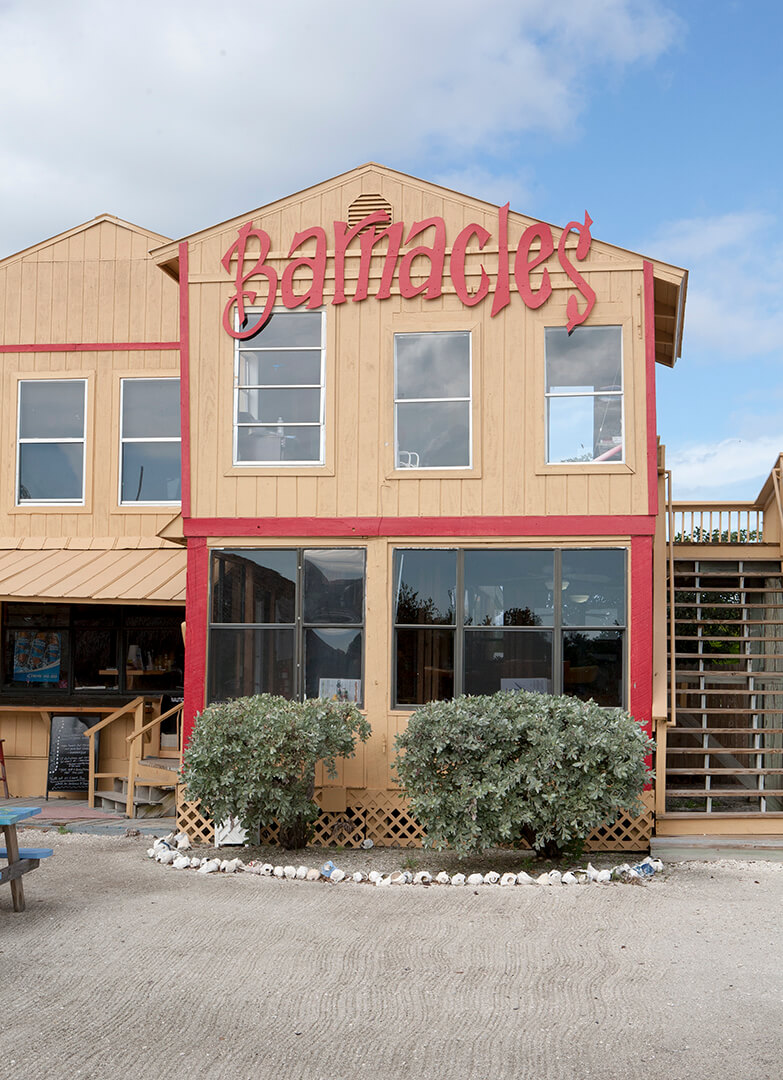 Barnacle’s Restaurant, formerly Barnacle Phil’s, is a kitschy two-story burger and seafood shack, near the waters edge. A thatched covering protects a half-dozen fancifully painted wood picnic tables out front allowing diners to take in a great view of the harbor. While we waited for our meal to arrive we ordered drinks and perused the dock and shoreline. The shell and pebble beach was dotted with undulating green blogs, which looked like a cross between zombie testicles and Green Slime. We decided that these must be some type of sponge, but have yet to determine their actual identity. As we dined on our tasty grouper tacos and sandwich with rice and beans we discussed the merits of Jimmy Buffet, whose music serenaded us at this island snack bar. 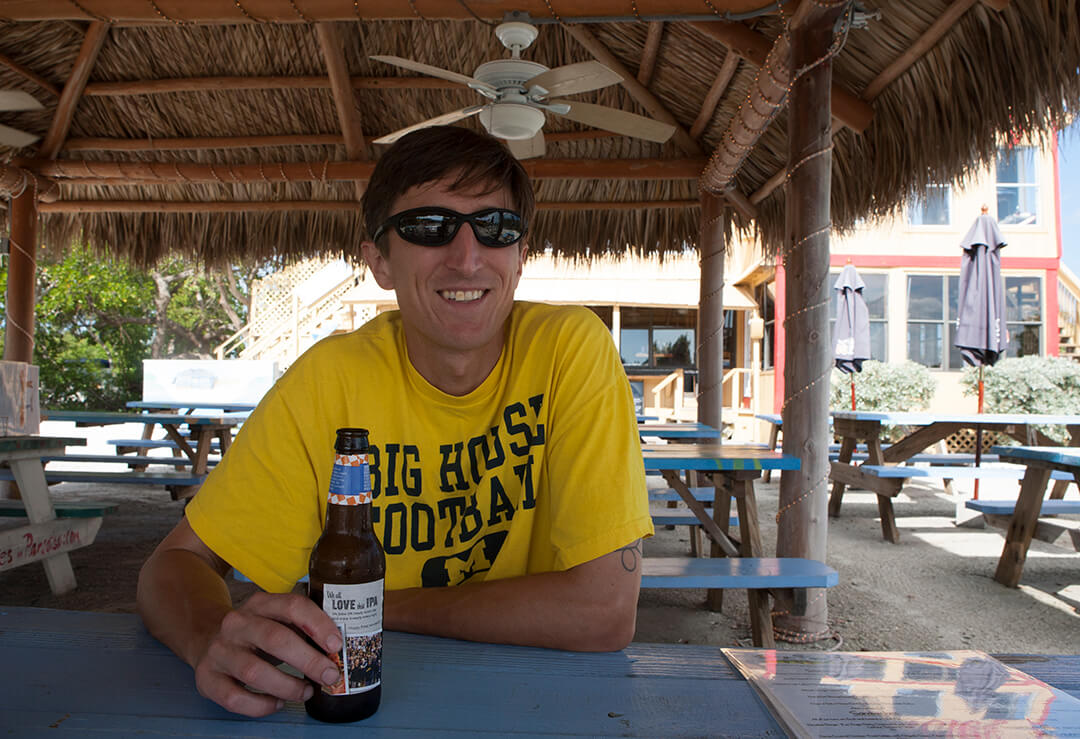 After lunch we took a short walk down to the airstrip (a fence-lined grass field) and watched a small plane take off. Next to the airstrip was a little real estate business with large placards outside covered in rental property information. One of the agents came out and chatted with us about a quaint cottage he thought we might like. It was situated right on the water, with a private dock and kayaks…sounded lovely! 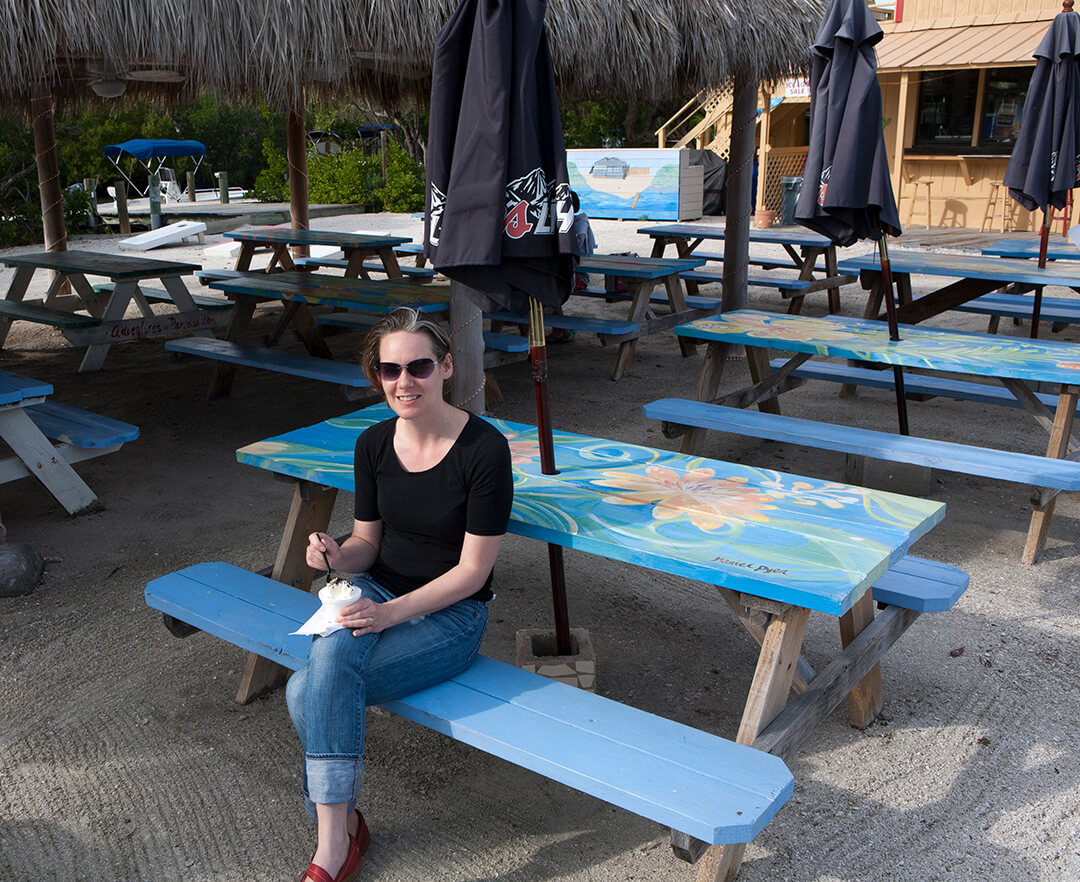 Back at Barnacles, we trekked upstairs looking for the ice cream-serving pirate. Sadly, no pirate was to be found, but the server made up for his lack of a costume with free sprinkles!!! After a nice visit to Safety Harbor, we decided we would head North again and find an anchorage off Gasparilla Island. As I had navigated us safely to Barnacles, I volunteered to get us back out. However, as we made our way slowly through the maze of markers, we were surrounded by traffic. Boats, both coming in and going out, made traversing the narrow channel feel like threading a needle. As we had come into the channel, the depth finder sounded quite often so I felt confident as it was sounding again that we would pass through without issue. Unfortunately, we were at lower tide and the edges of the channel were not forgiving. As we were passing an incoming boat, I suddenly lost the ability to steer. I asked Jeff what was happening and he said we had run aground.

Ugh. I felt pretty awful. I didn’t know what to do next, but I knew that panicking wasn’t going to help. Jeff began to devise some plans, including dropping an anchor to kedge off and prevent being pushed further aground by the current. We discussed this idea but we had some concerns as it meant having to put a line out into the channel, where traffic was pretty heavy. We decided to go ahead with this plan, as the alternatives seemed pretty bleak, and just after Jeff dropped the hook and started to tighten the rode on the winch, another boater came by and asked if we needed some help. We gladly accepted, as we wanted desperately to avoid having to call Boat US, who would easily tow us out, for a pretty penny ($400+). The friendly skipper tried to tie a bridle line to the back of his boat and tow us off, but we didn’t budge. After a few attempts a group of fishing boats made their way by us, rubbernecking like traffic on a busy highway. One of the captains of these boats also offered to help and he motored his flat bottom boat around to our starboard side and literally pushed us free. As he did this, the first boat that stopped pulled up our anchor and brought it out to us once we had found safe water. As he pulled up along side of Sojo we traded our anchor for a bottle of Mt. Gay. It was the least we could do to thank him for his assistance. 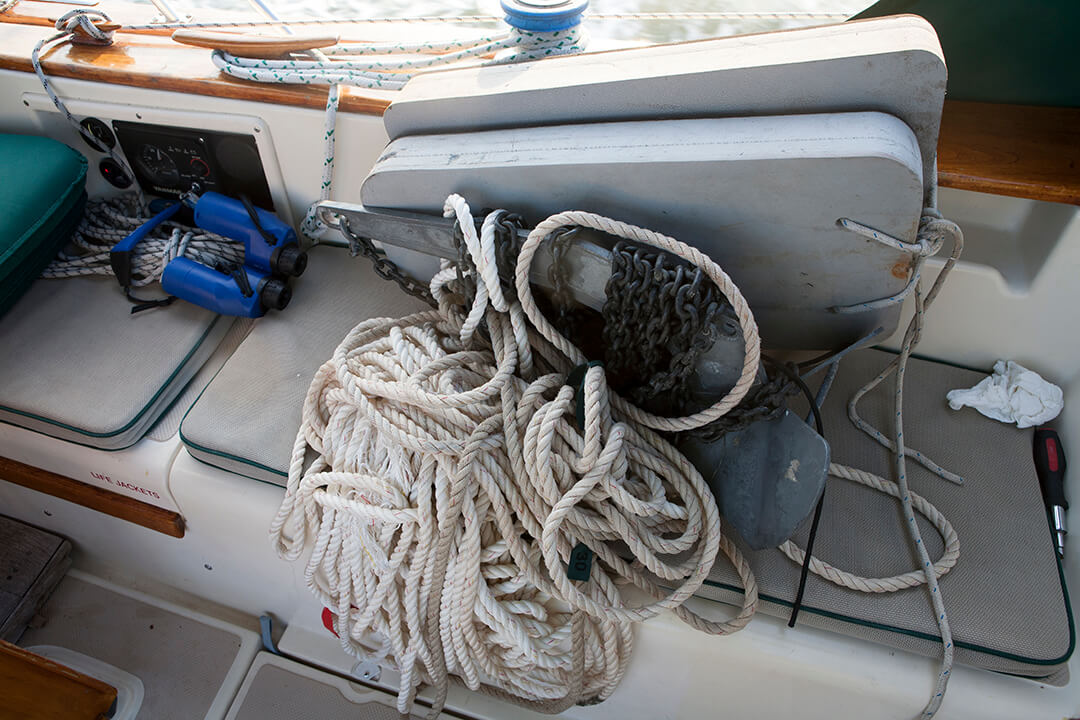 After the Mt. Gay trade!

This fiasco bit into our travel time and forced us to navigate through another very narrow and winding channel in pitch darkness. Coming into the channel from the ICW at night, we could not see how to continue past a set of old railroad tracks. I called Uncle Henry’s Marina and asked for assistance. After a lengthy explanation of the channel ahead, complete with missing marker numbers and sides of the channel to favor, we began to slowly and carefully maneuver Sojo through this boating labyrinth. With charts, headlamps, and a spotlight, we worked together to find our way along the precariously marked path to Uncle Henry’s Marina. Carl, the friendly and helpful afterhours dock hand, met us on arrival. As with most places we had visited on our charter, the marina was pretty vacant.

After enjoying long, hot showers we walked over to the North Village and grabbed dinner at Patrick’s Thai Bistro. We sat in the bar area (which has a copper topped bar) and ate a delicious meal. Back on Sojo we doubled up on blankets, put in earplugs to drown out the noise of the marina, and enjoyed a good nights sleep.