Our day began with a leisurely breakfast with Jeff’s parents in their beautiful North Port home. We had spent the night before riding around on their golf cart, drinking rum cocktails and searching for alligators on the golf course abutting their property. Marilyn and Jack (Jeff’s folks) had done all our provisioning for us, purchasing the list of foods and goods we had compiled plus a few special treats (Pyrat Rum rather than Mount Gay and homemade gluten-free chocolate chip cookies!)

As we drove down to the Burnt Store Marina, we passed through miles and miles of urban sprawl. I had never seen so many strip malls! When we got to the gate of the marina, we gave our name and got clearance to meander through a maze of condo lined streets toward our waiting vessel. Jeff went down to the dock first and met with Loretta, one of the crew for SWFY. She showed us where to get buggies to bring our provisions onboard and gave us a basic overview of the boat. Two trips to the car and 2 full buggies later, we had brought all of our provisions and luggage aboard. 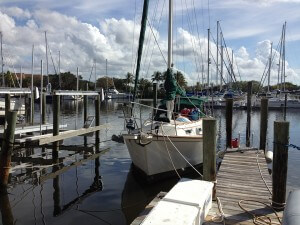 
We quickly began to arrange our things and investigate the storage capacity of the boat. She was a true charter vessel, with plenty of sheets, blankets and towels as well as a fully equipped kitchen. As we were still plugged in to shore power, we used this opportunity to fill the refrigerator and chill our beer and ginger ale and listen to the Bruce Springsteen channel on the Sirius radio. After we had sufficiently unpacked, we cracked a beer and enjoyed a snack of crackers and cheese in the cockpit while waiting for Mark, another SWFY crew to brief us on the systems of Sojourner, our Island Packet 31 yacht. The hour and a half wait passed rather quickly as we watched three manatees play and nibble in the shallow water 15 feet off our stern. 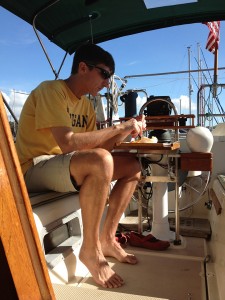 Waiting to Push Off

When Mark arrived, he asked permission to come aboard, which is kind of like knocking on a neighbor’s door. With lightning speed, he covered all of the systems of the boat, from the engine to the battery power to the head and bilge pumps. He showed us where the extra parts were stored and discussed which marinas most folks docked at. We told him we had no marina reservations and planned to anchor out for the 5 nights. He seemed pretty impressed by this and said that was more adventurous than the usual charter folks. We also mentioned that we planned to head out into the Gulf one day. He seemed pleasantly surprised and encouraged us in our plans. 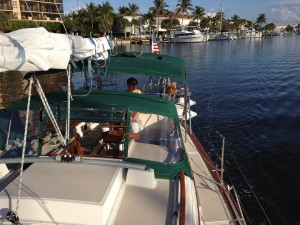 As the afternoon sun began to fall, we got underway. Heading due west out of the marina, with the setting sun in my eyes, I immediately understood how weather settles into the creases of a sailors face and creates a map of past journeys. When we set our navigation systems and engaged the autopilot, we erased the waypoints of the previous skipper and began to log our own squiggled record. We headed straight to Pelican Bay, arriving a few hours later to a dozen or so anchor lights guiding the way through the dusky sky. After Jeff dropped the hook, we settled in for an early dinner of scrambled eggs and fiesta corn with toast. The night air was warm enough, despite it being the second week in December, for us to have a few cocktails on deck and enjoy a star-lit sky. As the dark enveloped the bay, I took a few pictures of Jeff with a technique called ‘painting with light’ in which you set the camera for a long exposure and then introduce a light source, such as a flashlight, to create a controlled illumination of the subject. 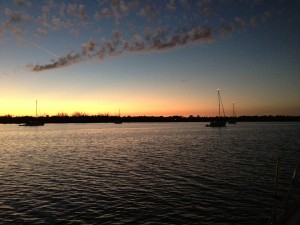 At anchor near Cayo Costa 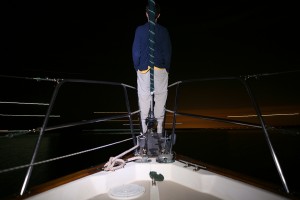 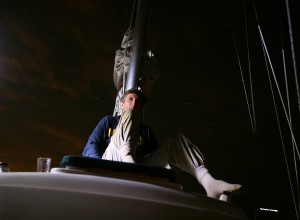 Waypoint: A set of coordinates that identify a point; used for navigation

Bilge: The deepest part inboard of a ship’s hull, where any leakage collects

Anchor Light: A single white mast light shown by a vessel at anchor during the night

“Anchor Out”: Term used to describe when cruisers anchor rather than tying up to a dock