Charts for a Year-Long Caribbean Sabbatical

Margaret and I are just eight months away from her 15-month sabbatical. We have pretty much decided – as much as you decide anything on a cruising boat – to head to the Caribbean. And, as we make our preparations, we are starting to gather the charts and guidebooks that we think we are going to need. As we begin to do that, I figured I would share the resources that we are looking at and also solicit recommendations.

I am solely going to look at paper charts in this post. In a follow-up post next week, I will go through the guidebooks that we are planning on having aboard. Our choices regarding electronic charts will have to wait for another post, after we have weighed our options a little more.

I should also say that we really have no set plan for where we are going when we head south, though both of us would really like to get beyond the Bahamas. The vague and incomplete plan at the moment is to make an offshore trip from Norfolk or Beaufort to the Virgins or St. Martin sometime in the fall. Where we would go from there is really anyone’s guess, but we talk about spending some of the late spring and early summer in the Bahamas on the way north. So, we are focused on the Lesser Antilles and the Bahamas, but want planning charts for the entire basin. We also figure it would be good to have a serviceable chart for Bermuda as well. 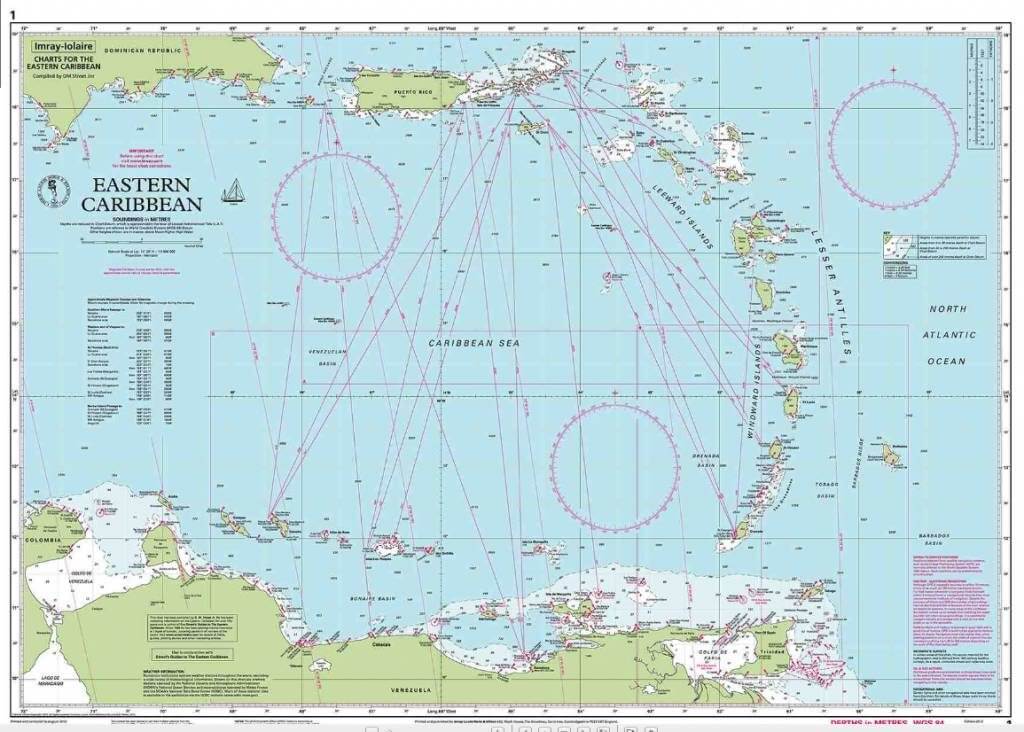 So far, the only chart that we have purchased specifically in preparation for this trip is the Imray Iolaire Chart 1: Eastern Caribbean General Chart. We had bought it from Amazon while we were still on Bear in Maine, and it was waiting for us when we returned to Peoria. Looking at the chart has already provided a lot of enjoyment, serving as the planning tool that we had hoped it would. 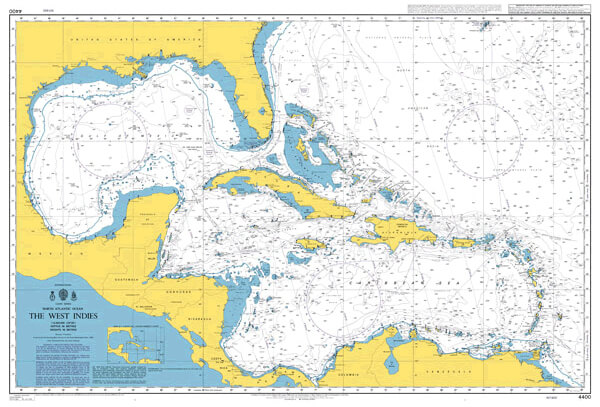 One of the things we have already decided by looking at the Imray chart is that we need other planning charts, namely one that takes in the entire Caribbean Sea. The Imray chart only covers from the southeastern corner of Hispaniola and the Gulf of Venezuela eastward. We plan to get British Admiralty Chart 4400: The West Indies soon. It covers the larger area, including the entire western coast of the Caribbean and Gulf of Mexico; essentially, it looks like every grade school wall map of the region. 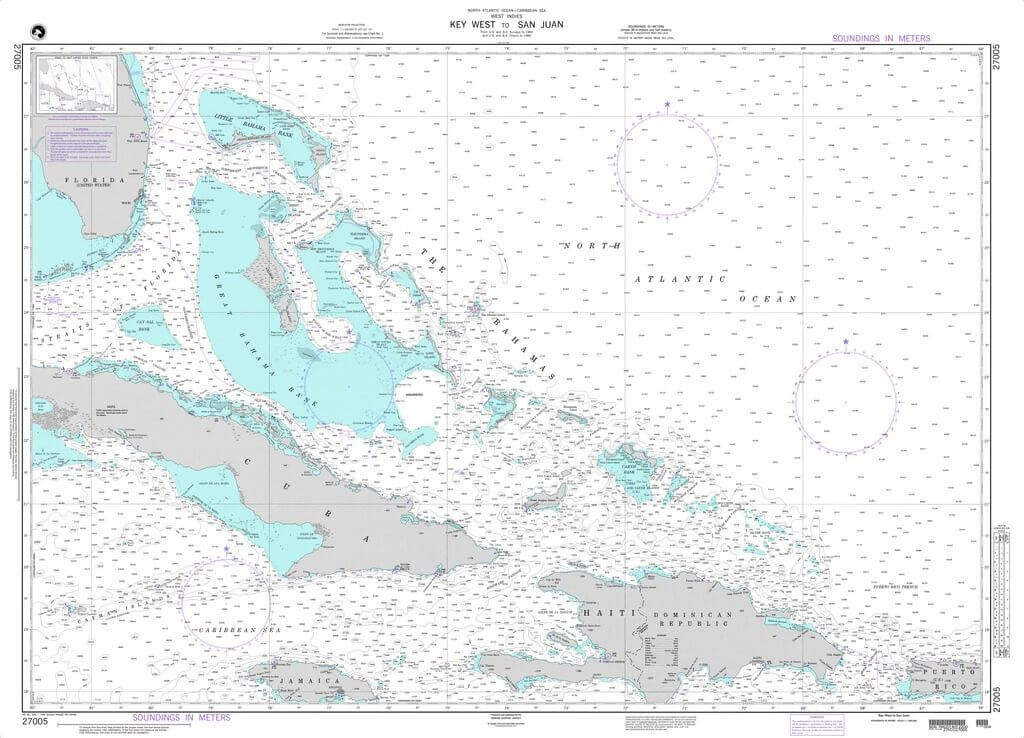 We also realized that we would like a chart that covers the greater Bahamas area, including Cuba, from Florida to Puerto Rico. We have an awesome free tourist chart of the Bahamas that we got from the Bahamas Tourism Department at a boat show a few years ago. It has served our dreaming well, but we figure it is time we take a little step up as we actually start planning. For that reason, we have already ordered the National Geospatial-Intelligence Agency (NGA) Chart 27005. Covering from Key West to San Juan, NGA 27005 is exactly what we were looking for.

For more detailed paper charts of the Caribbean, we are going to go with the NV chart kits 11.1 – Puerto Rico, 12.1 – Virgin Islands, 12.2 – Leeward Islands, and 12.3 – Windward Islands. If you are not familiar with these kits, each include a couple larger scale planning charts and then anywhere from a half dozen to 20 or 30 more detailed coastal and harbor charts. Together, the three 12-series kits cover from the Virgins to Grenada. And kit 11.1 includes the Dominican Republic east through the Spanish Virgins.

The three Explorer Chartbooks – The Far Bahamas, The Near Bahamas, and the Exumas

As I already mentioned we also wanted to ensure that we had a close-up chart of Bermuda, both in case we decided to venture there and in the event that we need to stop there when we go north and south. I think NGA chart 26341 will work for our purposes.

I should also say that we already have an older edition of the Maptech Charkit for Florida’s East Coast and the Keys. For that matter, we have a newer one for the Gulf Coast of Florida and the Keys (another charter purchase) and Norfolk to Florida from our trip down the ICW to St. Mary’s, Georgia. Those will certainly be useful for the return trip.

We will almost surely end up with more charts than what we have listed here; Cuba is a place we talk about going to a lot. And the ABCs, Columbia, Panama, and the rest of Latin America intrigue us. But the first three planning charts are going to help us think more about those and other possibilities. And the other charts are something we plan on using, or, at least, would rather have on board than not.

In the next post, I will discuss the guidebooks that we are considering purchasing or already have. And, please, if there are other charts that you would not head to the Caribbean without, please provide a comment below.

5 Responses to Charts for a Year-Long Caribbean Sabbatical