Life on the hook in Baltimore can be quite wonderful. This past summer, Margaret and I enjoyed ranging around town – and the coffee shops – in the mornings, then spending a relaxing few hours back aboard, before returning to the streets for happy hour and an evening of food. On the other hand, Baltimore also offers a full lineup of more high profile tourist destinations if you are looking for that. What you want to do in Baltimore might affect where you choose to anchor, as there are more local bar and restaurant options in Fells Point and Canton, but far more of the big attractions, like Camden Yards, the National Aquarium, and the USS Constellation right in or just outside the Inner Harbor. However, a dinghy or the water taxi will get you around to anywhere near the water. 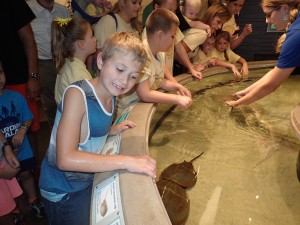 Lacking the deeper water that could be found south of the city and just next door to the good docks of Fells Point, the Inner Harbor was historically underdeveloped. By the late ‘70s, the area was dominated by abandoned factories and dilapidated warehouses. But in 1980, the city embarked on a bold redevelopment project, revitalizing the area with the Harborplace shopping mall, National Aquarium, Maryland Science Center, and, just beyond the harbor, Camden Yards as cornerstone attractions. Chain stores and restaurants, other tourist attractions, and a general renaissance followed. Today, the area is an attractive and fun place to shop and explore, especially for families. Nobody should miss the National Aquarium; everyone but the crustiest cruiser will find that the aquarium’s steep admission – forty dollars for adults – is fully justified by the open design, diversity of animals, and great interactive displays. For a slightly cheaper outing, tickets to see the Orioles play baseball in the stadium that revolutionized ballpark architecture can be had for as little as ten bucks. Touring the historic ships – the tall ship USS Constellation, submarine USS Torsk, lightship, and Coast Guard cutter – is also relatively cheap and very neat. Other attractions abound in the Inner Harbor, including the Ripley’s Believe It Or Not Museum, the Baltimore Civil War Museum, and the American Visionary Art Museum. Restaurants – including a giant Phillips Seafood and Hard Rock Café – are right along the waterfront as well.

If the glitz and crowds of the Inner Harbor seem a little overwhelming, Baltimore offers so much more. With a long history of shipbuilding dating back into the eighteenth century and a key point of entry for immigrants during the mid-1800s, Fells Point retains some of its waterfront character and still supports several rich immigrant communities. For history fans, the neighborhood also sports a rich and well-documented African-American past; among other things, it was here that Frederick Douglass lived, worked, and, importantly, learned to read during his teenage years before running north. Beyond the history, the real attraction of Fells Point is its many restaurants, bars, and shops. You won’t want to miss the Fells Point Maritime Museum, which is small and free, or other similarly small museums like the Jewish Museum of Maryland and Maryland African American History and Culture Museum. But you can fit those stops in while you stroll the streets, checking out the blend of old and new architecture, discovering hidden pieces of history, and finding cool items in the many boutiques, used record stores, religious shops, and all the other eclectic places around the neighborhood. 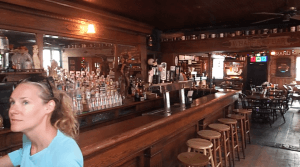 Margaret at the Wharf Rat; we actually stayed until it was packed.

While you are walking around Fells Point, check out the menus and specials at the numerous bars and restaurants. Though we did not come close to exhausting the possibilities, we found more than a few great places. Bertha’s Mussels – yes, the home of the bumper sticker “Eat Bertha’s Mussels” – sports a great atmosphere and even better selection of mussels and other treats. Although the mussels there are a couple bucks more than anywhere else in Fells Point, they are totally worth it. If you cannot pick one sauce from the half dozen or so options, go with a sampler. Alexander’s Tavern has a good bar menu (including extensive gluten-free options for those difficult crew members), lots of drink specials, and a huge selection of bar games (shuffleboard, Ms. Pac Man, Galaga, darts, cornhole, etc.). The Dogwatch Tavern also has a great game selection, including pool and pinball, and does not skimp on the drink specials. For slightly upscale Mediterranean at an incredible price, we enjoyed happy hour at Mezze; they take fifty percent off your entire bill from 4:30-6:30 every weekday. There are so many other great places – including more than a few ice cream and gelato choices – but the one other place every cruiser needs to go to is the Wharf Rat. They explicitly welcome sailors to their British maritime themed pub, have an extensive craft beer selection, and boast awesome clientele, staff, and atmosphere. Of course, we would be remiss if we did not make a coffee shop recommendation; the Daily Grind is without peer in the area with lots of seating and fast wifi. 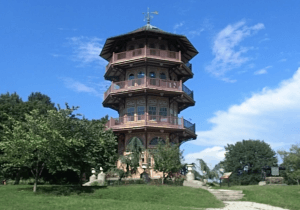 The pagoda in the middle of Patterson Park

Beyond the Inner Harbor and Fells Point, Baltimore offers a lot of other things to see and do, many of which we have only begun to explore. Canton has lots of great restaurants too with a little more local neighborhood feel than found in Fells Point. Patterson Park – a huge expanse of green with a Pagoda in the middle – is also an easy walk from the Fells Point and Canton anchorages and seems to have a number of good restaurants along its edges. There are also a ton of ethnic restaurants spread across the city that we did not really explore. The Maryland Zoo, Fort McHenry, Walters Art Museum, Baltimore Museum of Art, and the Baltimore Basilica are also spread around the city. Needless to say, there is so much more in Baltimore beyond this short list.

While we have not used the water taxi mentioned above, it is fourteen dollars per person for a daily unlimited pass. The taxi only goes between 13 marked stops and will not pick you up at your boat. Still, it provides an easy and scenic way to get around and does head out to Fort McHenry. 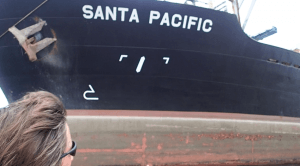 Instead of jetting around on the water taxi, we have enjoyed taking long dinghy trips around the waterfront. This year, we did a complete circumnavigation of the Northwest Harbor on our dinghy, getting up close and personal with the Domino Sugar factory and the massive ship unloading out front, waving at the folks working on the tug in the marine railway, poking our way under the pedestrian bridges dotting the Inner Harbor, and looking at boats in the many marinas along the shores. We will have a video up of our dinghy tour in a few weeks so that you can get a sense of the experience. But you can also read about our experiences last year and go to Baltimore and check it out for yourself.

Part one of our cruising guide to Baltimore, including information about the anchorages and dinghy docks, can be found here. You can also check out our two posts about our experiences in Baltimore last year: Domino Sugar, a Nasty Storm, and a Double Rainbow and Bibimbap in Baltimore. Videos of our time in Baltimore should be up on our YouTube channel soon.